Viewpoint: Climate Justice Must Be a Top Priority for Labor 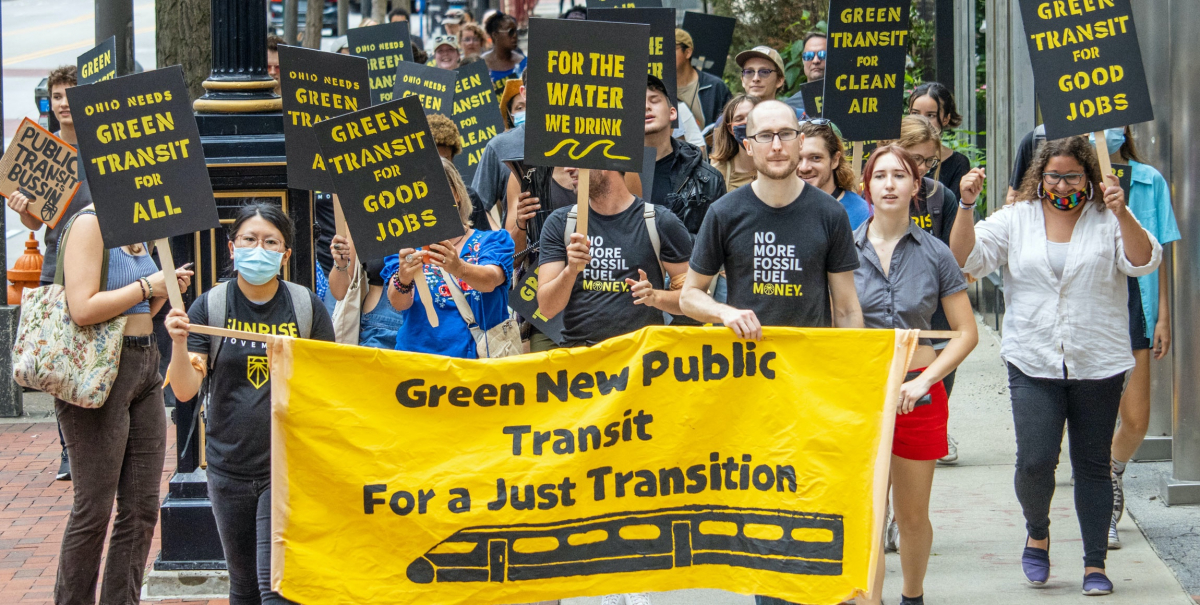 The Sunrise Movement and hundreds of other community- and state-based climate justice organizations are making headway by targeting politicians and polluters. Will labor step up and meet the challenges posed by climate change? Photo: Paul Becker, CC BY 2.0.

Today’s existential crisis for humanity is the immediate need to shift from fossil fuels to renewable energy. All of us have to. Everywhere. For workers and for our communities there is no more pressing matter than this.

We need to begin a discussion among co-workers, creating demands and acting on them at the workplace and bargaining table. We need to show up at local union meetings, central labor councils, and town halls supporting demands that move us toward a fossil fuel-free future.

At the same time, we need to protect the incomes and benefits of workers affected by the transition off of fossil fuels and to make sure they have real training opportunities. And we need to restore and elevate those communities that have been sacrificed for fossil fuel extraction, production, and distribution. We should promote candidates for elected office who support legislation which puts those aspirations into practice, such as the Green New Deal.

If the labor movement does not take the lead in pushing for a fair and just transition, one of these futures awaits us: (1) the world will either fail to make the transition to renewable energy and scorch us all, or (2) the working class will once again be forced to make all of the sacrifices in the transition.

The time is long past ripe for U.S. unions and our leaders to step up and use our collective power in our workplaces, in our communities, and in the streets to deal with these crises. That means we need to break out of the false choice between good union jobs and a livable environment.

There are no jobs on a dead planet. Social, economic, and environmental justice movements can provide some pressure to mitigate the crises, but how can we succeed if the labor movement and the environmental movement continue to allow the fossil fuel industry to pit us against each other? Rather than defending industries that need to be transformed, labor needs to insist that the transition to a renewable energy economy include income protection, investment in new jobs in communities that now depend on fossil fuels, retraining for those new jobs, and funds to give older workers a bridge to retirement.

Like any change of technology or work practice in a shop, if the workers affected don’t receive sufficient guarantees of income, benefits, and protections their support for it, regardless of the urgency, will suffer.

The $1.2 trillion bipartisan infrastructure package recently passed by the Senate—combined with Senator Bernie Sanders’ proposed $3.5 trillion budget reconciliation bill—offers a modicum of hope. If enacted, these bills would begin to re-tool our economy and communities for a fossil fuel-free future.

In addition to pro-worker measures like expanding Medicare, providing paid family and medical leave, and making it easier for workers to join unions, the reconciliation bill would create a Civilian Climate Corps (similar to the FDR-era Civilian Conservation Corps) that would create up to 1.5 million federal jobs to help the climate.

A next major step would be passing the labor-friendly THRIVE Act, aimed at cutting fossil fuel emissions in half by 2030 and endorsed by the Teachers (AFT), Postal Workers (APWU), Transit (ATU), Communications Workers (CWA), Service Employees (SEIU), United Electrical Workers (UE), and the Food and Commercial Workers (UFCW). This act would invest over $10 trillion to expand wind and solar power, electric vehicles, clean water, and public transit, creating 15 million jobs with strong wage and benefit guarantees, guided by a board with union and community representatives.

The measure has not been endorsed by the country’s largest federation, the AFL-CIO. Unfortunately, too many AFL-CIO unions are focused on preserving jobs in the fossil fuel economy, rather than helping to plan the new economy that will be powered by renewable energy. This short-term thinking is a problem that every union member needs to be concerned about. If labor doesn’t take action now, it will undermine all of our other work—and it will do so sooner rather than later, given the intensifying storms, heat waves, and flooding that we are all witnessing year after year.

In addition to supporting Senator Sanders’ budget reconciliation bill and the THRIVE Act, workers and unions should back bills that place a fee on carbon pollution and reinvest in green jobs and front-line communities. In order to rapidly reduce emissions, the Save Our Future Act and the America’s Clean Future Fund Act would place hefty fees on the large corporations responsible for extracting fossil fuels that create greenhouse gas emissions and air pollution. Those funds would be redirected to investments in communities that have been sacrificed for fossil fuel extraction and production, and to providing stimulus checks for working families.

So far, the AFT and the Utility Workers have endorsed this approach as a useful tool to combat climate change and create green jobs. Support from other unions could be crucial to get these carbon fees included in the budget reconciliation bill. Without a fee on carbon pollution, there is no financial penalty or direct cost to corporations like Shell and Exxon to stop extracting fossil fuels.

PRESSURE IN THE STREETS AND ON THE JOB

These crucial pieces of legislation will not pass without action at work and in the streets to develop the necessary political pressure. A bottom-up, rank-and-file movement will be necessary to provide hope of securing a habitable future for humanity—pushing union leaders and elected officials at work and in union meetings and the halls of the people: town, city, county, state, and federal. Discuss, educate, agitate, organize, and take action!

The fossil-fuel industry is driven by profit—not by people. We know this because for the last 40 years industry executives knew about and sat on studies which showed that the extraction and use of fossil fuels was bad for human survival.

This was especially true for poor communities and workers who live around or work in fossil fuels. Yet, the industry continued to perpetuate fossil fuel use, downplay the harm, and pour gigantic resources to enforce the lie that society cannot prosper without it. People are expendable in pursuit of profits.

Dismantling the fossil fuel industry and retooling our world with renewable energy is no less daunting than abolitionists’ fight to end slavery and to put people over profits. Like those who came before us, we need to use whatever nonviolent tools are at our disposal to end these injustices to poor and working people.

It is time for the labor movement at all levels to make climate justice a top priority. We need to heighten discussion at the rank-and-file level—followed by workplace and street actions—to a degree that we have not seen in 80 years. If we don’t rise up before the waters and fires do, then all other voices for peace, equity, and justice will be drowned out by an increasingly inhospitable planet.

There are many organizations working to quickly transition from fossil fuels to renewables. Trade Unions for Energy Democracy and the Labor Network for Sustainability are two of the main labor-related forums. The Sunrise Movement and hundreds of other community- and state-based climate justice organizations are making headway by targeting politicians and polluters. If you think that it is crucial that the labor movement take action on climate justice, please write to us so we can build this movement together.

John Braxton (jwbraxton[at]gmail[dot]com) is an activist in the movements for peace, labor, and environmental justice. He was staff for the Teamsters Union during the 1997 national UPS strike, and he is past co-president of AFT Local 2026 in Philadelphia. Peter Knowlton (pqknowlton[at]gmail[dot]com) is retired General President and longtime member of the United Electrical Workers (UE) and apprentice of the anti-nuke and Native American solidarity movements.

Related
Letter Carrier: Air Quality Is a Union Issue »
Striking Alabama Coal Miners Want Their $1.1 Billion Back »
Billionaires Can Have the Cosmos—We Only Want the Earth »
Get Fossil Fuels Out of Our Pension, Say Environmental Protection Workers »
Gearing Up for Bargaining, Canadian Union Pushes for a Greener, Better Postal Service »