'If Your House Is On Fire You Run': Workers Strike for Safety At Understaffed Mental Health Center

Workers have been on strike since early August over dangerous conditions and severe understaffing at the for-profit Cascade Behavior Health Center in Tukwila, Washington. The strike started as an informal sickout following an August 1 incident in which a patient injured 11 staff members. Photo: SEIU 1199NW

A terrifying scene unfolded the evening of August 1 at Cascade Behavioral Health Center in Tukwila, a suburb of Seattle. A volatile patient had stolen a badge and set of keys from an employee and was running between treatment units for mental health and addiction, taunting patients, vandalizing offices, making lewd comments, touching female staff and patients, and lashing out at attempts to restrain him.

A “Code Gray” was called—a signal for staff to rush to help restrain the man before he could hurt himself or others.

Sara Moallin, a longtime nurse and union delegate, tried calling the police twice during the ordeal. But they would not come, insisting that a new reform law backed by Black Lives Matter activists prevented them from helping.

In fact, HB 1310 imposes a “reasonable care” standard that compels officers to use de-escalation strategies and limit their use of force, but would not have impeded Tukwila Police from supporting the Cascade workers.

Fifteen nurses and mental health techs from several units converged on the patient, using a mattress to corner and subdue him. His kicks and punches injured 11 staff members, including several who needed medical attention. One RN, Alazar Yirgu, was left gasping for air and numb in his legs and feet. He was taken out with an oxygen mask and on a stretcher.

Paramedics sped to the scene but had to wait for police to arrive to intervene. The police arrived 33 minutes after the last call.

Although many staffers were traumatized by the patient attack, no one seemed surprised. The same patient had also been violent days earlier—but without security officers or even enough nursing staff to cover patients, no safeguards were put in place. Workplace violence is so common at Cascade that Yirgu was recovering from a previous injury from a patient a few weeks earlier.

FROM SICKOUT TO STRIKE 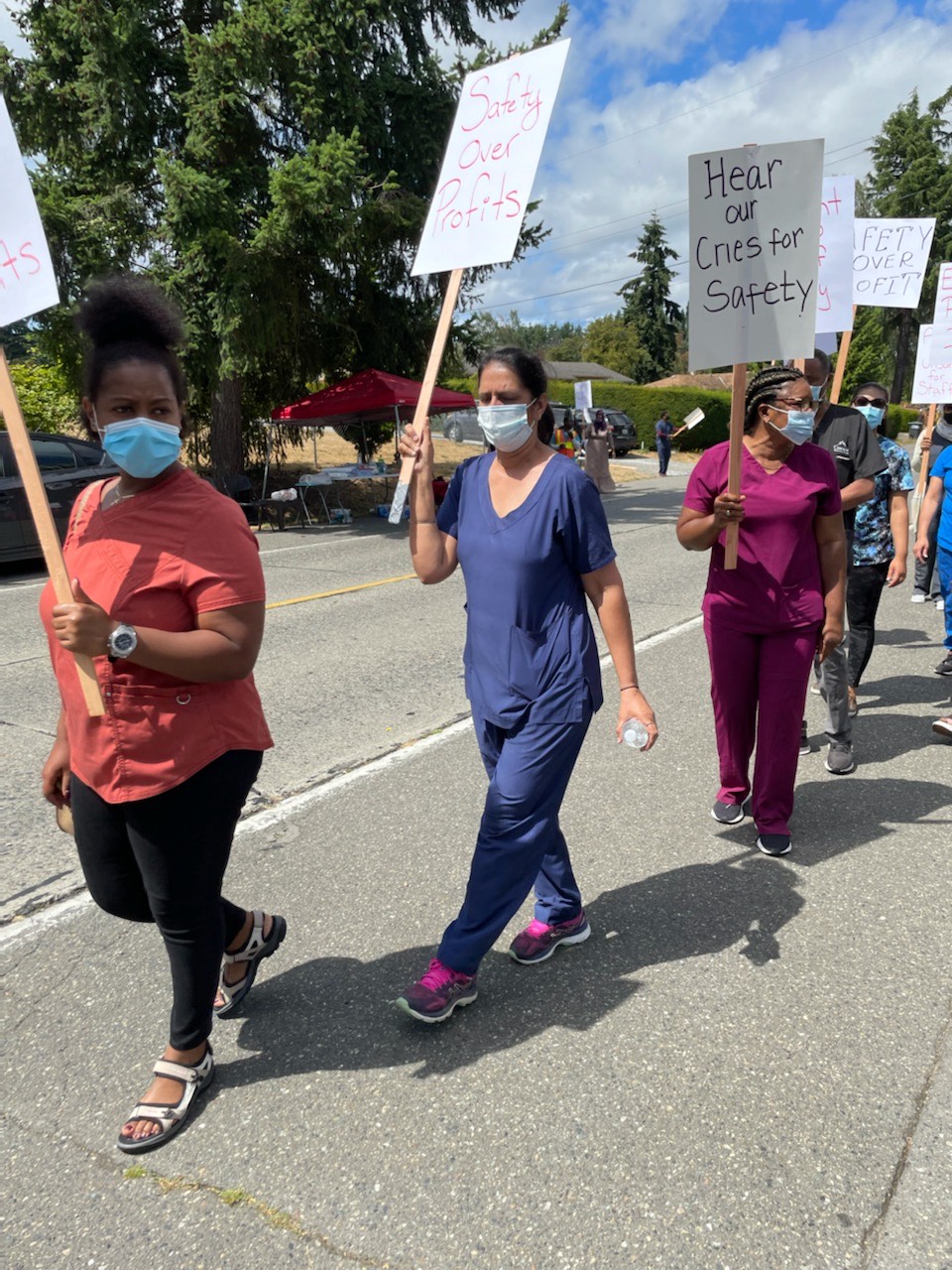 The strike started with individuals calling in sick to recover from the August 1 attack—and because they didn’t feel safe. By the end of the week, several dozen nursing staff and mental health technicians were out on a picket line with handmade signs blaming Cascade management for devaluing the safety of workers and patients. Photo courtesy of Kim Rowe.

By the end of the week, several dozen nursing staff and mental health technicians, out of the 220-person workforce, were out on a picket line with handmade signs blaming Cascade management for devaluing the safety of workers and patients.

"If your house is on fire you run, you don't wait for the firefighters,” said Moallin.

The workers weren’t calling it a strike yet. Though some of the organizers were delegates for their union, Service Employees (SEIU) Healthcare 1199NW, they took this action on their own.

It started with individuals calling in sick to recover from the attack—and because they didn’t feel safe. Nursing staff and techs began calling, group texting, and eventually meeting a few nights that first week. Together, about 70 workers decided they would tell their managers they were not coming in to work until management met their top demand: hiring four security guards for round-the-clock coverage.

The CEO called it an illegal wildcat. Termination notices started showing up in mailboxes.

The union contract with Cascade had recently expired, and they were in the midst of a frustrating bargaining campaign. Management was offering 1 percent raises yearly for three years and a $1,500 bonus, which would have to be paid back if the worker left before three years.

Under federal law, strikes in health care require a 10-day notice. Cascade management filed charges against 1199NW for an illegal strike. This was the first that union leadership had heard about the walkout.

At first 1199NW officially stayed away from the strike, to avoid the appearance of organizing or supporting a wildcat. But the union’s legal team quickly strategized to support a “safety strike.” These types of strikes have been deemed protected by the National Labor Relations Board when there are abnormally dangerous working conditions, meaning management can’t fire workers who engage in them. Safety strikes are rare; most often they occur in the building trades, though official statistics are not available.

SEIU Healthcare 1199NW publicly supported police reform initiatives last year, including HB 1310, in the wake of the highly publicized deaths of Black people at the hands of police officers.

In June 2020, the Martin Luther King County Labor Council passed a resolution (co-sponsored by 1199NW) calling for the Seattle Police Officers Guild to reckon with racism in its ranks immediately. When the guidelines weren’t met, the Council voted to expel SPOG.

“We can’t both stand with a police system that’s set up to hurt our Black community and stand up for our people of color who are oppressed by police,” said Jane Hopkins, executive vice president of 1199NW.

After a meeting with the Tukwila Police Department and Cascade staff, 1199NW reports that the police were “not responsive” to their requests to discuss the August 1 incident and take down a report.

In August, after new rules limiting police use of force went into effect, Seattle police officers made 45 percent fewer involuntary commitments—transporting a patient in a mental health crisis to a psychiatric unit against their will—than they had averaged over the previous four years, according to Seattle public news site Crosscut. That likely means police are responding to fewer mental health calls. While reducing armed police intervention in mental health crises is an eventual goal of reform efforts, behavioral health advocates fear a vacuum is left before other structures are put in place to support workers and patients.

Since the first week of the strike, at least 20 strikers have been sent termination notices. Others who have not worked are still being scheduled, even though they do not show up. Management has threatened to report the striking nurses and techs to state licensing boards.

In addition to calling for Cascade to hire security guards, the strikers want all fired workers returned and for management to stop threatening their professional licenses.

Workers say Cascade took a turn for the worse in 2014, when Tennessee-based Acadia Health purchased the previously nonprofit facility and eliminated the security staff. While more than 50 percent of its revenue comes from Medicare and Medicaid reimbursements, Acadia is a for-profit company that raked in $183 million in operating profit in 2020 from its 227 facilities. Its CEO earns a $1 million salary, with the possibility of $6 million more in bonuses and stock depending on Acadia’s performance in 2021.

Acadia Healthcare has found other ways to line their pockets with federal dollars. In 2019 the company was charged Medicaid fraud for the overfilling of lab tests. Acadia settled and agreed to pay the largest health care fraud-related settlement in West Virginia history: $3.2 million to the state and $17 million to the United States.

Many of the staff are immigrants, predominantly from East Africa. They accuse Cascade’s management of being racist and xenophobic.

When patients attack, managers have repeatedly blamed the workers—claiming that they don’t speak English well enough and that their “accents aggravate patients.”

The Chief Nursing Officer is known for calling the on-call doctor overnight and demanding that patients be removed from a “one-to-one” order, where a staff person is assigned to the patient for their whole shift. Nurses say that physicians who don’t comply have been pushed out. Staff say these decisions are based on profitability rather than safety.

Nurses charge that Cascade will admit any patient—even one who has medical needs it cannot serve, or when they don’t have enough staffing to be safe. They allege that patients have died or been sent to the E.R. because Cascade was not equipped with items like a bed that could safely support the breathing of an obese patient, or because self-harming patients were left alone for too long.

Staff members are expected to safely restrain patients experiencing a crisis, but say they receive only a four-hour training program called “Handle with Care.” Many have only been through the training online, with no practical experience.

In July, a few staff members were wearing contract campaign stickers that read “1% is disrespectful,” a reference to Cascade’s wage offer. According to Yirgu, a manager grabbed an employee by the shirt to rip off the sticker, and even called a “Code Gray” over the radios—the same code reserved for dangerous patients—in an attempt to embarrass the worker. Another staffer was sent home for wearing the sticker.

‘BLOOD ON THEIR HANDS’

Like other health care workers, the staff at Cascade have been stretched thin in the pandemic. Masks ran short, while managers kept a supply of N95s for themselves. Patients were not required to get Covid tests. Management clammed up about potential cases and exposures.

At one point, workers were not alerted that a Covid-positive patient had arrived. Moallin caught the virus and was out of work for five weeks; she believes she passed it to her two sisters and husband. After the outbreak at the facility, one Cascade worker died.

Even then, Cascade management refused to acknowledge the outbreak. “I told managers they have blood on their hands,” said Yirgu, who started to notice he was being targeted by management when he was cut off from signing up for overtime shifts even when the facility was short-staffed. 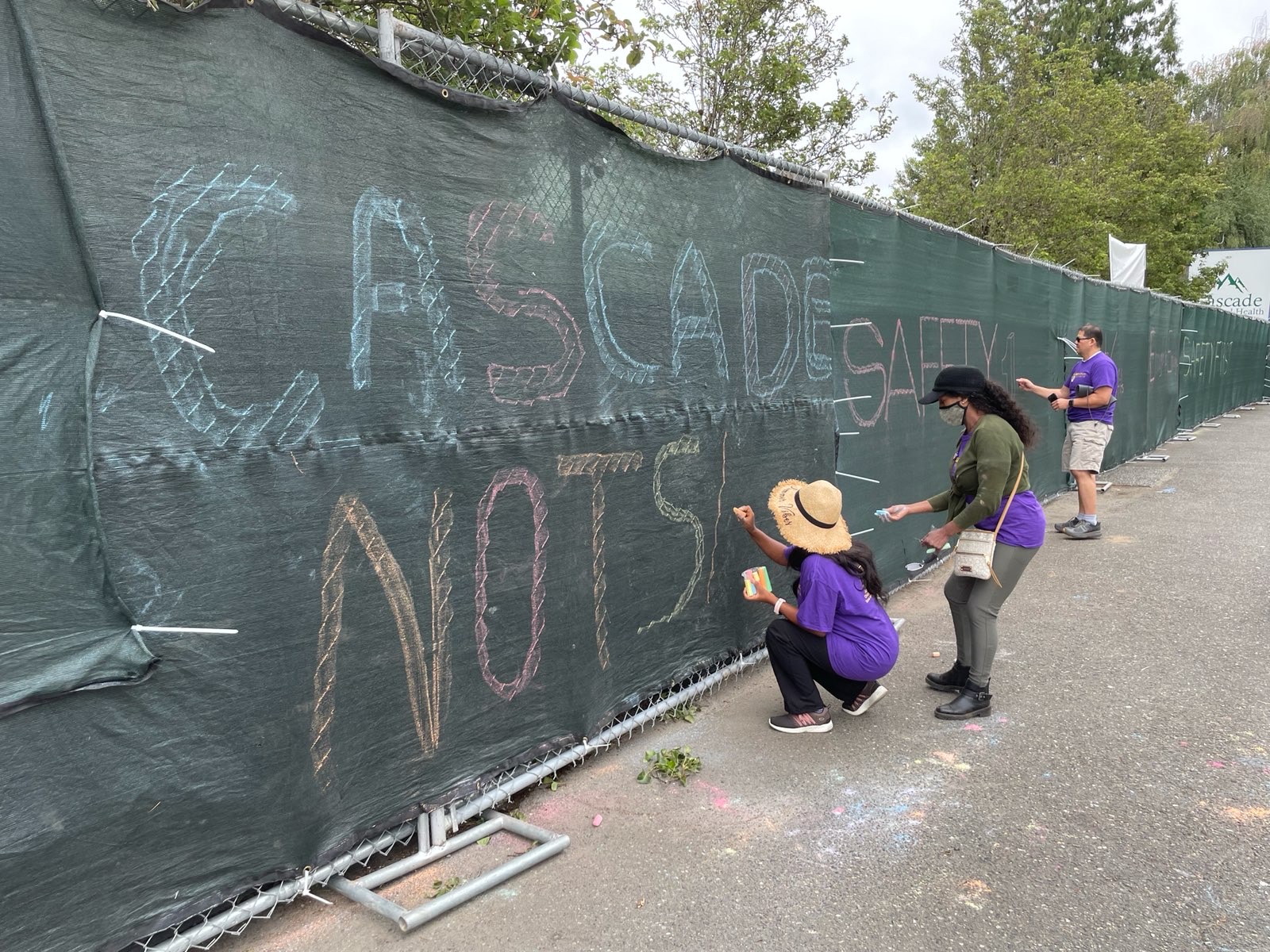 Cascade has erected a fence to make the ongoing picket line less visible from the facility, which strikers and their supporters have now decorated with slogans of solidarity. Photo: SEIU 1199NW.

Cascade has erected a fence to make the ongoing picket line less visible from the facility, which strikers and their supporters have now decorated with slogans of solidarity. Ironically, while resisting the demand to add security for workers’ and patients’ safety, management has installed security guards to monitor the strike.

Moallin, Yirgu, and their colleagues are buoyed by the support they’ve gotten from community organizations, the Seattle labor movement, and their SEIU siblings. Members of SEIU Local 205, which includes municipal, health care, and education workers in Tennessee, delivered a letter to Acadia’s CEO at her Franklin, Tennessee office.

Based on reports from colleagues still working inside, nurses believe Cascade is filling far fewer beds than normal.

Yirgu is still recovering from his injuries and battling the company to get workers’ comp.

He is feeling better these days, though he’s not mobile enough to walk the picket line or play with his two toddlers just yet. When he thinks about the dozens of colleagues striking in solidarity with him, he says, “I feel great. I am so lucky.

“I’ll pay this price for the next person. I know people before me paid the price to get where we are now. I’ll make sure it doesn’t happen to anyone else.”

A version of this article appeared in Labor Notes #511. Don't miss an issue, subscribe today.

Sarah Hughes is a staff writer and organizer at Labor Notes.sarah@labornotes.org
Related
Kaiser Strikers Insist You Should Be Able to Get an Appointment When You Need It »
Kaiser Clinicians Strike against ‘Separate and Unequal’ Mental Health Care »
Stung by Ascension's Union-Busting, Michigan Nurses Gird for Contract Battle »
Washington Mental Health Workers Win Safety Strike »
Why (and How) Michigan Nurses Rebuffed a Raid on Our Union »

I'm neither surprised that Acadia is a for-profit company (registered in Tennessee, one of the first "right-to-work" states) nor that the police would use BLM in a devious excuse to avoid providing legitimate protection to the citizens. This country is corrupt through and through.