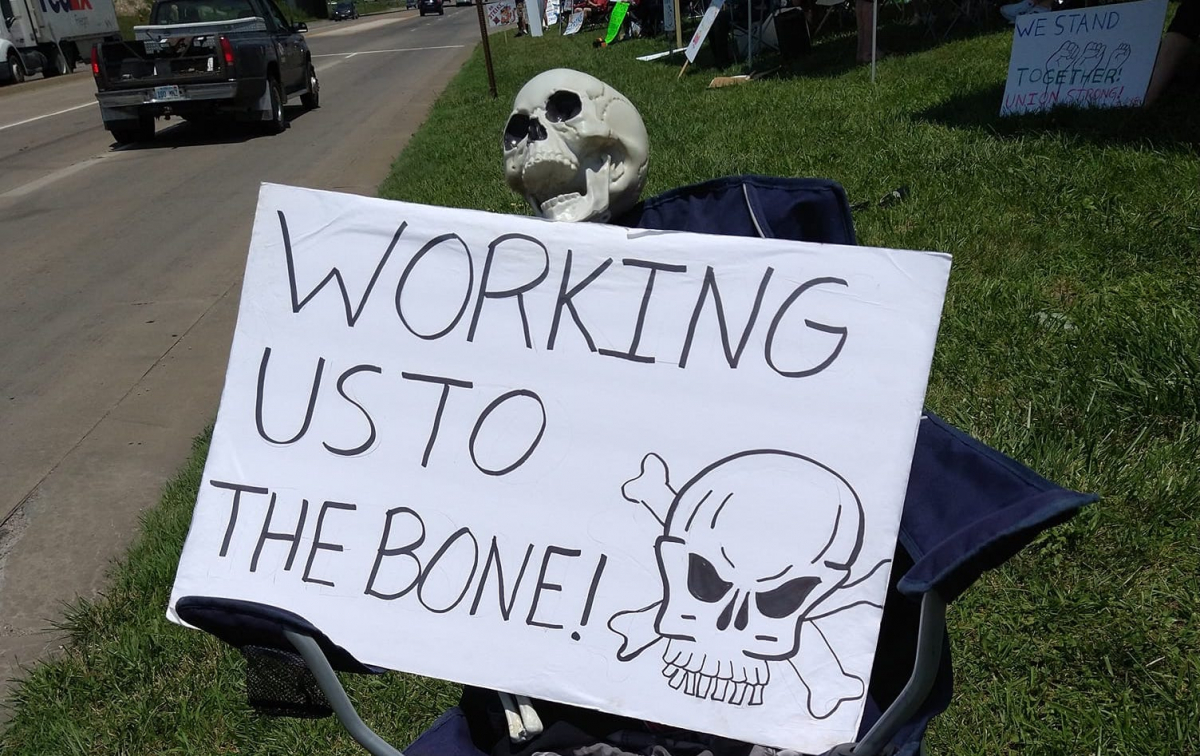 Frito-Lay workers in Topeka, Kansas, have been on strike since July 5. Among their biggest issues is forced overtime; some say they've had to work 84-hour weeks for weeks on end. “Nobody I know loves Frito-Lay enough that they want to live there,” said one worker. Photo: Monk Drapeaux-Stewart

Frito-Lay workers in Topeka, Kansas, have been on strike since Monday over low pay and forced overtime.

Some workers have been forced to work 12-hour shifts, seven days a week, for weeks on end due to short staffing. They want to see that change.

“Nobody I know loves Frito-Lay enough that they want to live there,” said Monk Drapeaux-Stewart, a box drop technician, responsible for keeping the plant’s machines supplied with cardboard. “We want to go home and see our families. We want to have our weekends off. We want to work the time that we agreed to work—and hopefully not much more than that.”

‘BOTTOM OF THE LADDER’

The last several contracts have featured lump sum bonuses most years, leaving wage rates stagnant for most classifications. Drapeaux-Stewart said he’s only gotten a 77-cent increase over the last 12 years.

Meanwhile, the Topeka area has attracted several new manufacturing facilities and large warehouses over the past 20 years, taking advantage of its location smack in the center of the country, with access to a number of highway arteries. The Frito-Lay facility, which has been around for 50 years, now competes for workers with a Mars chocolate facility, a Bimbo bread bakery, and Home Depot and Target distribution centers, as well as a Goodyear tire plant that opened in 1945 (workers there are members of the Steelworkers). A Walmart distribution center is slated to open in September.

“Between all those industries, Frito-Lay sits at the bottom of the ladder as far as wage scales,” said Mark Benaka, business manager for Bakery Workers (BCTGM) Local 218, which represents workers at Frito-Lay and Bimbo. Other local facilities have offered significant wage increases in recent weeks, Benaka said, but Frito-Lay continues to offer pennies.

“Fifteen, 20 years ago Frito-Lay had a really good reputation—all you need is a high school diploma and you’ve got this job with good pay and benefits,” said Drapeaux-Stewart, who started working at the facility 16 years ago. “But slowly all of that has been whittled away.”

That’s made it difficult to maintain workers—and led to the mountains of forced overtime.

“Conditions are really just deteriorating as each contract rolls by,” said Cheri Renfro, an operator in the Geographic Enterprise Solutions department, where workers fulfill orders for smaller mom-and-pop shops and gas stations.

Renfro estimated that the company brought in more than 350 employees in the last year—and lost the same amount. “You have to wonder as a company why wouldn’t you question that—say, ‘Hey, what’s going on?’”

Last week, workers voted down the latest contract offer from the company, which included a 2 percent wage increase this year and a 60-hour-a-week cap on the amount of hours a worker can be forced to work. The wages weren’t enough and the overtime cap would have meant more senior workers being forced in on weekends, workers say.

Other issues fueling workers’ anger include safety, a punitive attendance policy, and pressure from inexperienced supervisors competing for promotions. “This storm has been brewing for years,” Renfro wrote in a letter to the Topeka Capital-Journal, in which she outlined examples of the plant’s “toxic work environment,” including management keeping the line going after a worker collapsed and died and refusing bereavement leave for a worker whose father passed away during the Covid lockdown, since there was no funeral.

Frito-Lay is a division of PepsiCo and has been a major contributor to the company’s bottom line, earning $1.2 billion in profits on $4.2 billion in revenue in the first quarter. Last year, the division was responsible for over half of PepsiCo’s operating profits, with profits of $5.3 billion on $18.2 billion in revenue. PepsiCo also owns brands including Mountain Dew, Quaker Oats, Gatorade, Tropicana, and Aquafina.

Topeka is one of the largest of Frito-Lay’s 30 U.S. manufacturing facilities; most are nonunion. The 850 workers there make, package, and ship nearly every type of Frito-Lay snack: Lays potato chips, Tostitos, Cheetos, Sun Chips, Fritos, every flavor of Dorito, and more. Six hundred are members of Local 218 (Kansas is a right-to-work state).

The plant never slowed down during the pandemic, workers said. Instead, production increased, as people ate at home more and bought more comfort foods like chips. “I’ve learned that when something’s hitting Americans beneath the belt, the two main items that never suffer are snack foods and alcohol,” said Benaka, who retired from the plant in 2017 after 37 years.

Workers were at one point given an extra $20 a day to work during the pandemic, up to $100 a week—but that only lasted a few weeks. “I don’t know if they were afraid we were gonna get used to the higher wage,” said Renfro.

Production at the plant fluctuates seasonally—it’s busier in the summer and around big holidays and the Super Bowl. Workers are used to overtime during those periods. But recently the overtime has become constant. “Now we’ve having overtime when we shouldn’t be,” said Renfro—and a lot more of it.

‘I’M DONE WITH GIVING EVERYTHING TO FRITO-LAY’

Renfro said she worked 73 hours during the week leading up the Fourth of July, and then worked from 3 a.m. until 3 p.m. on the holiday. “I went to sleep—I didn’t even hear the fireworks, I was so tired.”

“I’ve had to miss going to so many holidays because I’m getting forced,” said Renfro. “I’ve had to call my mom and tell her I couldn’t make it. I don’t want to miss those moments anymore. I’m done with giving everything to Frito-Lay—my time, my holidays.”

One of the most hated forms of forced overtime at the plant is being forced to work a “suicide.” That’s when the company makes a worker stay four hours on top of their eight-hour shift, and then forces them in four hours early before their next shift—leaving them only eight hours off.

Drapeaux-Stewart said these shifts have become increasingly common, especially in departments with the worst understaffing, like the warehouse. “It’s crazy that this has become the blue-collar everyday [worker’s] new normal.”

The company has set up a parking lot a mile from the plant. It’s running coach buses from the lot every 15 minutes to shuttle in temporary workers and out-of-state scabs.

But strikers suspect that the buses are a ruse. “Most of these buses are completely empty, or have one to three people, not counting the driver,” said Drapeaux-Stewart. “It’s psychological warfare—they’re trying to demoralize and dispirit the men and women of the union in the hopes we’ll come groveling back for whatever crumbs they offer us.”

Benaka said the company also appears to be pulling empty trailers in and out of the facility to intimidate workers. “You’re talking about folks who’ve worked at this facility 30 or 40 years—they know what an empty trailer looks like.”

Strikers are also monitoring the facility’s smokestacks to get a sense of the strike’s impact. “There’s been no smoke, no steam, no nothing, no sign of production at all,” said Drapeaux-Stewart.

“Usually there’s always an odor coming out of Frito-Lay, but it’s been smelling really good outside,” said Renfro.

Local supporters have been donating food and water to the picket line. Some local restaurants have said they will stop serving Pepsi products. A local magazine, 785, has set up a fund to help strikers pay their water bills.

“I’m really amazed at the community support,” said Renfro. “It makes you proud to be a part of this community.”

“It’s scary but it’s exciting,” said Drapeaux-Stewart. “I have so much hope for this strike that we will finally get what we’ve needed—the guarantee of getting to see our families, and earning a living wage to support those families.”

For more on the strike, see the video from the picket line by More Perfect Union.