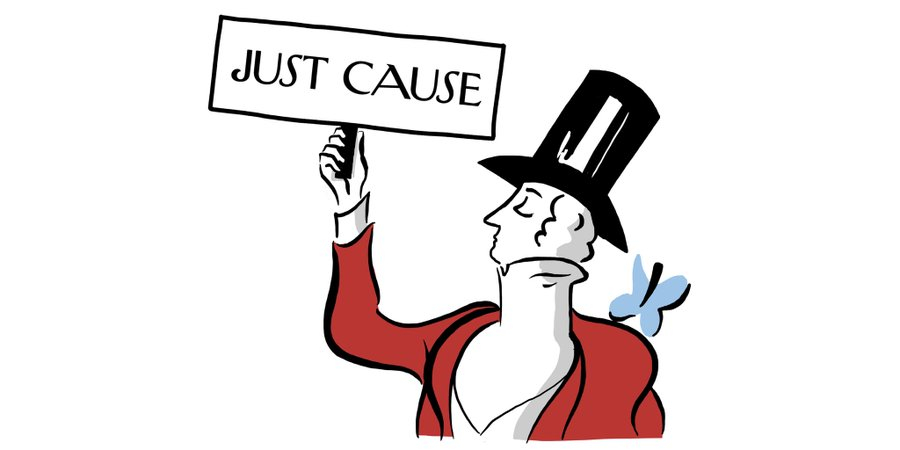 After 95 years, at-will employment is over at The New Yorker. Our union finally won just cause in our first contract. Securing this protection took strong organizing and strategic mobilization—on top of nearly two years of negotiations.

What changed the tide was a digital picket of the New Yorker Festival, a weeklong annual event where celebrities, politicians, and various experts discuss timely topics. The opening night was to feature Representative Alexandria Ocasio-Cortez and Senator Elizabeth Warren talking about “the future of progressivism.”

The New Yorker Union was formally recognized in 2018 and has been at the bargaining table since November of that year. One of the biggest hang-ups: management’s insistence that we remain an at-will workplace.

At-will employment is the default condition in nonunion workplaces: management can legally fire anyone at any time for almost any reason, or no reason. It fosters a discriminatory culture that endangers journalists of color, silences voices of dissent, and jeopardizes the editorial independence of newsrooms.

Just cause is the requirement for due process in disciplines. It’s a decades-old labor standard, including in the media industry. We knew it needed to be the cornerstone of our first contract.

JUST CAUSE, NO EXCEPTIONS

There has been a wave of media organizing in the past few years. But many young unions in the NewsGuild of New York are still fighting for first contracts, and several have faced resistance from management on the issue of just cause—a concept that has been uncontroversial in other shops.

At The New Yorker, and at Buzzfeed News, Wirecutter, New York Magazine, Quartz, Ziff Davis, Pitchfork, and Ars Technica, management put forth the same arguments for a loophole to just cause that has been dubbed an “editorial exception.”

This exception would essentially void just cause by allowing management to completely bypass due process; it would prevent the union from challenging any discipline that the company claimed was related to editorial standards.

Each of these bargaining units is comprised of editorial employees—including, at The New Yorker, fact checkers, copy editors, designers, producers, and other workers whose jobs consist largely of upholding editorial standards. (Staff writers are not members of the New Yorker Union.) In an editorial unit, an “editorial exception” would swallow the rule, undermining the protections just cause is meant to provide.

“I think it was easy for the leadership at the magazine to think, oh, this was just to pick a fight,” said video editor Chris Kim, a vice chair of the union. “The truth is it wasn’t. For me, the just cause fight was super personal, and immediate, and a genuine need.”

In anonymized testimonials that our bargaining committee presented to management, union members expressed frustration at unclear, inconsistent performance criteria and unconstructive, aggressive feedback from managers that sometimes seemed personal. Members said that these dynamics made them feel beaten down, anxious, and discouraged from offering ideas or asking questions. The at-will system was hurting morale and interfering with members’ ability to do their work.

Our unit executed multiple actions to show management how strongly we felt about just cause. We hung signs featuring testimonials around our office; we walked out (virtually, by closing our computers and setting away messages); we wrote an open letter that garnered more than 2,000 signatures; our co-workers packed our Zoom bargaining sessions.

But nothing seemed to move the needle. Management refused to take just cause seriously.

We realized that we would have to think bigger and bolder. Bringing our protest to a public event that aligned the magazine with two prominent progressive leaders seemed like a good place to start. We set our focus on The New Yorker Festival.

THE POWER OF THE PICKET

One of two events on the festival’s opening night was set to feature Ocasio-Cortez and Warren. The event’s theme—the future of progressivism—was the perfect setting for an action demanding that The New Yorker live up to the values the publication espouses. Targeting this ticketed event posed a financial threat to the company while also challenging its image.

We initially decided to picket only this one event. We reached out to both congresswomen to explain our fight. They confirmed that they would stand with us and not cross our picket line, and they let management know that they were unable to participate in the festival while this dispute remained unresolved. AOC even tweeted to her 9 million followers, “Love the @NewYorker, but @ewarren and I don’t cross picket lines.”

Our digital picket was designed to be informational. We built a micro-website to educate supporters about the importance of just cause. We planned a rally and panel discussion where the president of our local, Susan DeCarava, and a few New Yorker Union members would discuss job security and our pursuit of a fair contract.

When we announced the picket publicly, the company swiftly cancelled the Ocasio-Cortez and Warren conversation—seeming to signal that it still wouldn’t budge on just cause.

But what ultimately forced management to come to the table was the risk that we would expand our protest to additional events. Rather quickly, we started to receive support from other high-profile Festival guests, who pledged to withdraw their participation as long as our picket stood.

‘IMAGINE HOW WE FEEL’

Still, over the next few days, New Yorker management fought us. They held captive-audience meetings with different teams and departments; they encouraged staff members outside the bargaining unit to try to dissuade us; and they sought out opportunities to create confusion and division—all while claiming they didn’t have any power and pointing the finger at their parent company Condé Nast.

“The [captive-audience] meeting was very tense,” said union member Aviva Michaelov, The New Yorker’s design director, who recalled that managers expressed their frustration and feelings of powerlessness. “And my response to that was, if you feel powerless, can you imagine how powerless we feel?”

Management claimed that The New Yorker cared about its employees like a family. But that claim “felt very insufficient, like a lot of words but not much action behind it,” Michaelov said. “You have to show care with action.”

The company finally heard us. The Friday before the festival, we received an offer to bargain through the weekend to save the following week’s events.

The bargaining committees met for 35 hours over the following three days. Many unit members observed over Zoom, emphasizing what management was, at last, beginning to understand: our shop was united in the pursuit of job security, and we were prepared to sacrifice a lot—even our weekends—to see it through.

In the end, we won just cause, no exceptions; the New Yorker Festival was a success, with the Ocasio-Cortez and Warren event rescheduled to another night; and the tone of negotiations changed—for the first time in nearly two years, management treated union members as equals at the table.

Furthermore, our victory caused a domino effect. In the weeks since, the unions at Wirecutter, Buzzfeed News, and Ziff Davis have also secured just cause, proving that using power builds power.

At The New Yorker our efforts continue as we bargain toward a fair contract overall.

“I think that this whole process has really provided evidence of the power of collective action, and really shown management that we’re a force to be reckoned with,” said Naib Mian, an interactives researcher and union vice chair. “I definitely still foresee an uphill battle ahead.” But now members are more ready than they’ve ever been.

As unit chair and fact-checker Natalie Meade put it, “When management and the company sees how united we are, they are forced to actually take time and listen to what we’re saying. It’s a shame that it took picketing the New Yorker Festival for them to hear us, but I think it was about time they felt our power.

“I hope that not a ton of other shops have to go to the lengths that we went to, to get just cause,” she added, “because it shouldn’t be a fight.”

Stefanie Frey is the senior mobilizer at the NewsGuild of New York. Hannah Aizenman is The New Yorker’s poetry coordinator. Mai Schotz is an associate photo editor at The New Yorker.

Related
The Itch to Twitch: How We Opened Up Our Union’s Webinar »
General Motors Returns to Oshawa—But Offers Only Second-Tier Jobs in a ‘Pop-Up’ Plant »
COVID Tipped the Scale: How King County Employees Made Childcare a Union Benefit »
Interview: If Only Unions Had Managed to Organize the South, Could Trump Have Been Avoided? »
How Postal Workers Saved the Election »
We Finally Won Just Cause Protection at The New Yorker after AOC and Warren Refused to Cross Our Picket Line After 95 years, at-will employment is over at The New Yorker. Our union finally won just cause in our first contract. Securing this protection took strong organizing and strategic mobilization—on top of nearly two years of negotiations. What changed the tide was a digital picket of the New Yorker Festival, a weeklong annual event where celebrities, politicians, and various experts discuss timel...