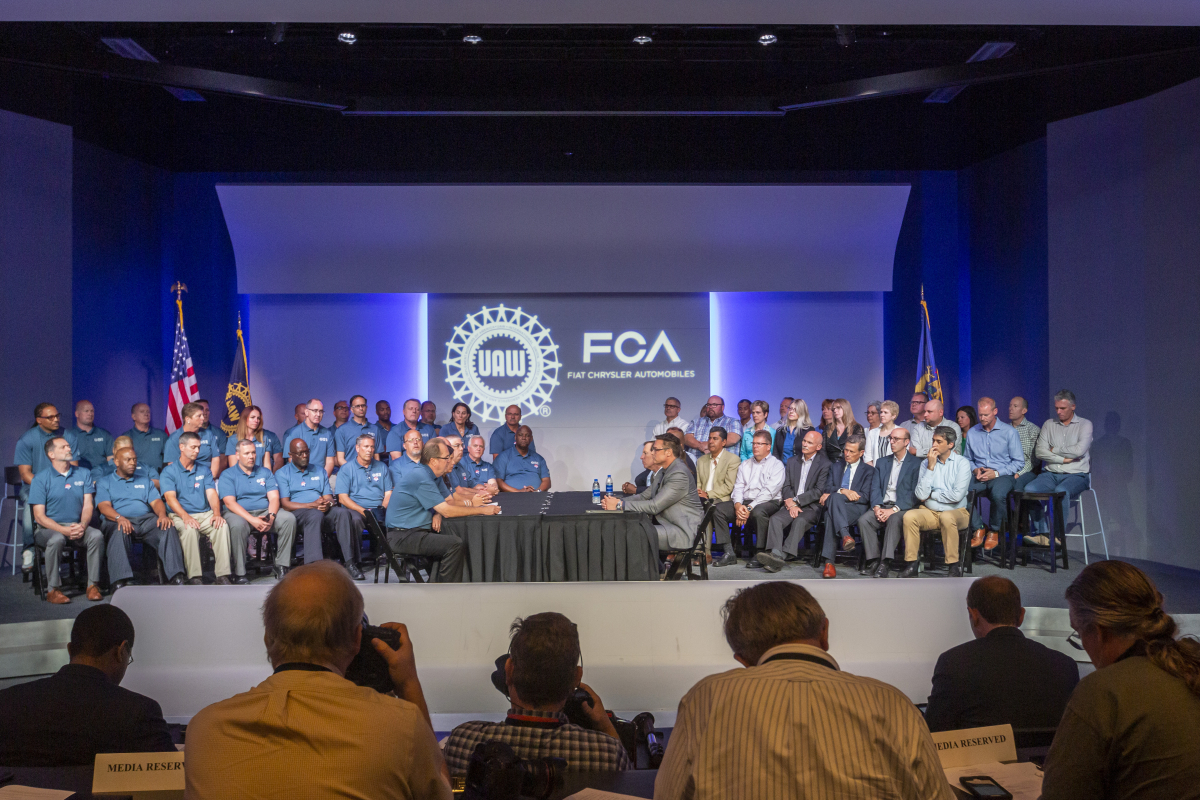 UAW locals are passing resolutions in support of one member, one vote for top union positions. Photo: Jim West/jimwestphoto.com

United Auto Workers activists are making a push for a specially called national convention to amend the union’s constitution and mandate that its top positions be elected by a direct vote of the members.

So far six UAW locals have passed resolutions, including four that participated in the recent strike at General Motors—Locals 774 and 259 in New York, Local 1853 in Tennessee, Local 838 in Iowa, and Local 167 in Michigan—plus the National Writers Union, Local 1981. Together they represent an estimated 10,000 members.

The resolutions are being passed according to Article 8 of the UAW Constitution, which outlines the process by which members can trigger a special convention to amend the union’s bylaws.

A handful of large unions elect top officers by a “one member, one vote” system, including the Steelworkers, Machinists, and Teamsters. But like many other big unions, the UAW relies on a convention delegate system.

Locals are apportioned delegates based on their numbers of dues-paying members. Members elect their local delegates to the constitutional convention every four years. These delegates elect the International Executive Board (IEB), including the president.

The resolution also calls for other amendments to the union constitution. It would require the secretary-treasurer to publish the minutes of IEB meetings and to provide detailed quarterly financial reports online.

And it would create a new process to determine IEB salaries. Currently the board’s pay is tied to the pay rate for the union staff—whose salaries are negotiated by the board.

A new national network of rank-and-file auto workers, called Unite All Workers for Democracy (UAWD), is supporting the Article 8 push.

About 50 activists from across the country are active in the group. Their goals are to challenge concessions at the big automakers and to clean up the union, which is reeling from a still-unfolding corruption scandal that has already landed multiple union officials in jail and unseated a president.

To trigger the special convention, the resolution must be passed by at least 15 locals, from at least five states, representing at least 20 percent of the union’s membership—around 79,000 UAW members.

If enough locals pass the resolution, then the international union has to conduct a referendum of the entire membership. If a majority of voting members vote to hold a special convention, then the union is required to organize one.

Since the days of UAW President Walter Reuther, the delegate system has been tightly controlled by the union’s ruling Administration Caucus.

For seven decades, every president and almost every regional director has been a member of the Administration Caucus, which maintains its power through an extensive patronage network.

In exchange for political loyalty, union officials over the years have provided thousands of workers with jobs off the assembly line.

If the union’s IEB had included outspoken opponents of the ruling caucus, their oversight would have been a strong disincentive to the flagrant culture of corruption that took hold at the top of the UAW. It would likely also have made it visible sooner.

“The Administration Caucus is thoroughly corrupt—the leaders in it have either participated in corruption, or known about it and didn’t do anything about it,” said Ray Jensen, an activist and UAWD member from Local 774 at GM’s Tonawanda Engine Plant in Buffalo, New York.

Jensen brought the Article 8 resolution to his local’s membership meeting in November, where it passed unanimously. The local had also voted no on the GM contract. Members were angry that the company will keep hiring scads of long-term temps and that second-tier workers still won’t get pensions or retiree health care.

“If we’re going to clean up the union, then the membership needs to have a voice in who we elect to represent us,” Jensen said, “and that will happen through one member, one vote.”

Correction: An earlier version of this story erroneously stated that the vote to raise UAW leader salaries was unanimous.