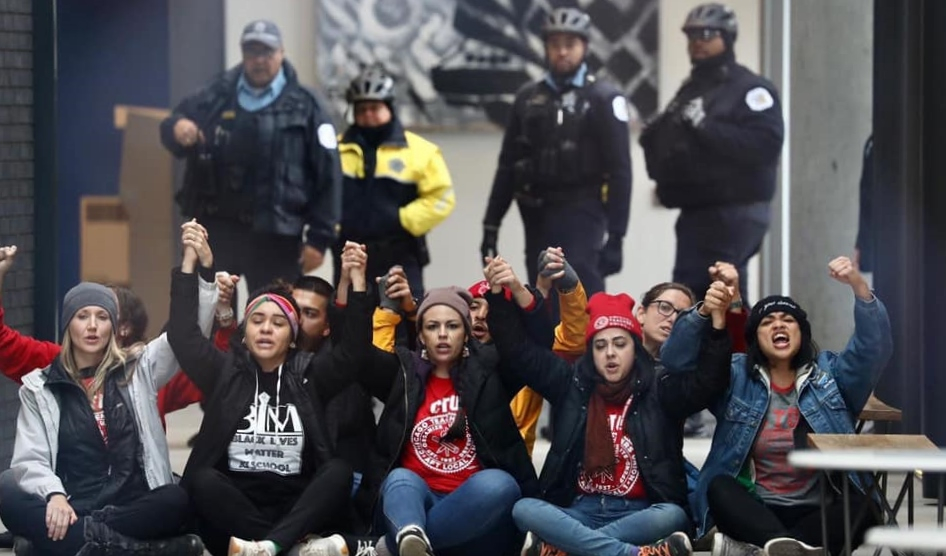 On day 10 of their strike, Chicago teachers rallied at the site of a $1.3 billion development funded with property tax dollars that are diverted from schools. Nine teachers were arrested in civil disobedience. Photo: CTU

Today Chicago teachers returned to school triumphant, after an 11-day walkout that became a showdown between their union and the proclaimed progressive new Mayor Lori Lightfoot.

If you’re looking for an example of the power of the strike, look no further. The strikers accomplished what months of bargaining could not.

The mayor and her appointed school board had made all but no movement in the 10 months of bargaining that led up to the strike. (Lightfoot has only been mayor for five months, but she kept the previous bargaining team from former Mayor Rahm Emanuel.)

Days before the strike, the district presented what it said was its best offer. Once the strike started, the union bargaining team reported that the district was finally moving on its bargaining demands. On day three, the mayor said there was no more money and sent a letter asking the union to end the strike.

But the mayor must have found more money. On day 10, CTU brought a tentative agreement to its House of Delegates that the mayor said costs $500 million. Where the money will come from is not clear. Delegates voted it up by 60 percent, pending the back-to-work agreement.

One sticking point remained: CTU wanted the district to make up the lost days, both for the sake of their own paychecks and for the sake of students’ instructional time. The mayor was still saying no to that.

So teachers spent yesterday, day 11, rallying in the snow outside city hall for a final deal, including the union’s terms of return. Meanwhile school employees in SEIU Local 73 stayed out in solidarity, even though they had already voted up their own settlement.

Ultimately the mayor agreed to make up five of the 11 instructional days lost to the strike. School resumed today; CTU has 10 days for members to ratify the tentative agreement.

Like Los Angeles and Oakland teachers earlier this year, Chicago’s educators tried to pack into their union contract solutions to decades of underfunding public education and social issues like homelessness, lack of access to health care, attacks on immigrant communities, and the school-to-prison pipeline.

Chicago teachers came in with big demands to improve class size, add more nurses, social workers, and librarians, and raise pay for veteran teachers and for CTU school employees who were making poverty wages. They also set out to get more support, including housing, for homeless students. Here’s some of what they won:

By day 10, the stakes of the strike were increasing. While there were holdout issues, including teacher prep time and the demand to shrink class sizes, teachers and school employees weighed the threat that they would lose their health insurance if the strike lasted beyond November 1.

‘WE WON A BATTLE, WE HAVEN’T WON THE WAR’

Strike days had the same rhythm as in 2012: morning picket lines, afternoon rallies. Some afternoons the strikers poured into downtown; other days they went to targeted sites. On day 10, teachers rallied at the $1.3 billion development site Sterling Bay, funded through tax increment financing—property tax dollars that are diverted from schools to boost development. The TIF program is meant for blighted areas but has become a slush fund for the mayor. Nine teachers were arrested in civil disobedience.

There was an incredible outpouring of support for the strike. School employees in SEIU Local 73 settled three days before CTU, winning up to 40 percent wage increases, but committed to honoring the teachers’ picket lines. UPS drivers from Teamsters Local 705 refused to cross the picket lines, too. Community supporters set up a Bread for Ed fundraiser, bringing in $45,000 for food for strikers, parents, and students.

The strikers also won a commitment from the governor and statehouse leaders that they will support an elected school board, a demand that CTU also brought to the negotiating table but dropped in the final deal.

However, the strike ended without the union forcing Lightfoot to add a new tax on pricey real estate sales (a real estate transfer tax) or dedicate funds to add affordable housing and address homelessness. The teachers also accepted the mayor’s demand for a five-year contract term, a long deal that pushes their next potential strike out past the next mayoral election. And the union didn’t win prep time for elementary teachers, a big issue.

“The strike is just a battle,” Soto said. “We won a battle; we haven’t won the war. People understood that the fight was about the kids and not about us.”