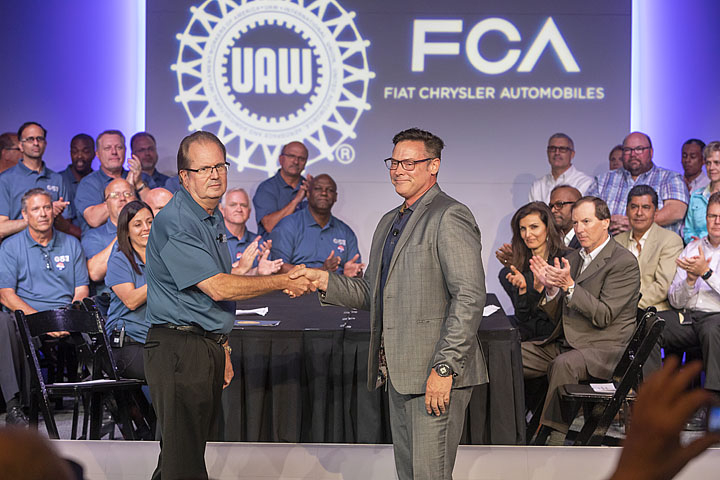 As news broke yesterday that United Auto Workers President Gary Jones was resigning over allegations of corruption, questions arose whether Acting President Rory Gamble was also mired in the unsavory culture that has become a way of life in the upper reaches of the union.

Gamble’s son Rory Gamble II works as a Tuition Assistance Plan representative at the UAW-Chrysler National Training Center, which is at the center of a federal corruption probe.

Ten union and three Fiat-Chrysler executives have been charged with using Center funds to finance their lavish lifestyles, and some are already in jail. But the Center served another purpose: as a source of jobs, including sham jobs, for friends and family of union officials.

The union denies any impropriety. “Acting President Gamble is himself the son of a prominent labor and civil rights leader and former officer of Local 600,” wrote UAW spokesperson Brian Rothenberg in a statement. “He understands that all UAW staff and members should be judged on their own merits and no one should be either punished or helped by those relationships. But UAW staff and members also should have the right to apply for jobs and achieve success based on their own merit.”

Gamble comes out of Ford, not Fiat-Chrysler. He was a UAW executive board member and replaced Jones after the latter was placed on paid leave by the board November 2. Jones had allegedly been involved in a scheme with other union officials to embezzle hundreds of thousands of dollars from the union treasury. Yesterday Jones resigned just as news broke that the board was bringing charges against him.

Former President Dennis Williams has also been implicated in corruption and is at the center of a new lawsuit brought by General Motors against Fiat-Chrysler, filed yesterday in federal court. GM claims that FCA’s corrupting influence on the union gave the company a competitive advantage and that FCA enlisted the union to help facilitate a merger between the two companies—a merger that GM executives did not want. At one point, according to the suit, FCA supplied UAW Vice President General Holiefield with a script to use in a union board meeting. Holiefield’s widow, Monica Morgan, is one of those now in jail.

To date, neither Gamble nor his son has been accused of wrongdoing in the federal investigation.

On picket lines all across the September-October GM strike, UAW members said they were out to demand equality for all the auto workers who have fallen through the cracks in GM’s increasingly fragmented workforce.

For many, this fight was personal. Many Tier 1 workers have children who do the same jobs as they do, but for lower pay and benefits.

Meanwhile at union headquarters, one of the perks officials enjoy is appointing relatives to high-paying office jobs, away from the grind of the factory floor.

According to court documents, when he was a UAW vice president, Norwood Jewell siphoned off hundreds of thousands of dollars from the joint UAW-Chrysler Training Center to live the life of a corporate fat cat—spending the money on cigars, first-class airline tickets, lavish parties, liquor, and wine, and even playing golf for a two-month stretch at a luxury villa in California.

Jewell pleaded guilty and was sentenced to 15 months in federal prison.

Jewell also got sham jobs at the Center for friends, family members, and allies. According to prosecutors, the Center paid out hundreds of thousands of dollars to the UAW, which was undergoing a financial crunch, by paying union employees as if they were Center employees.

All of these activities were condoned by Chrysler executives who hoped to keep UAW officials, they said, “fat, dumb, and happy.”

Similar nepotism has plagued the joint UAW-GM Center for Human Resources; activists jokingly refer to it as the “Center for Hiding Relatives.”

UAW Vice President Cindy Estrada admitted during a deposition in an unrelated case in 2015 that her step-daughter worked at the UAW-GM Center. John Ashton, a facilities manager there, said that his uncle, former UAW vice president and GM board member Joe Ashton, helped him get his job.

Earlier this month, the federal government brought charges against Joe Ashton for his part in a scheme to direct millions of dollars from the Center to vendors of items such as watches, in exchange for hundreds of thousands of dollars in kickbacks and bribes.

In total, 13 people have been indicted for criminal activity as part of the probe, including three Fiat-Chrysler executives and 10 UAW officials.

When Jones was placed on leave, the UAW Constitution directed that the International Executive Board select an acting president from among the officers. Now that his position has been vacated, the Board must meet again to determine who will fill the position for the remainder of the term, but this time the Board members can choose anyone they wish.

The Board has officially brought Article 30 charges against Region 5 Director Vance Pearson, who was earlier arrested and charged with embezzlement in collusion with Jones and Williams. If successful, the charges would result in Pearson being removed from his position and expelled from the union. The Region 5 delegates to the 2018 UAW constitutional convention would then reconvene to vote on a new director to fill the remainder of his four-year term.

Chris Brooks is a staff writer and organizer with Labor Notes.chris@labornotes.org
Related
Opening the Door to a More Democratic UAW »
Auto Workers to Vote on Direct Elections »
New York Bookstore Workers Blast Their Boss for Layoffs While Taking a PPP Loan »
Black Workers at Ohio Ford Plant Denounce Racist Taunts »
Can Auto Workers Win the Right to Vote? Here's How Teamsters Did It »