Steward's Corner: How to Respond If a Member’s Work Authorization Is Challenged 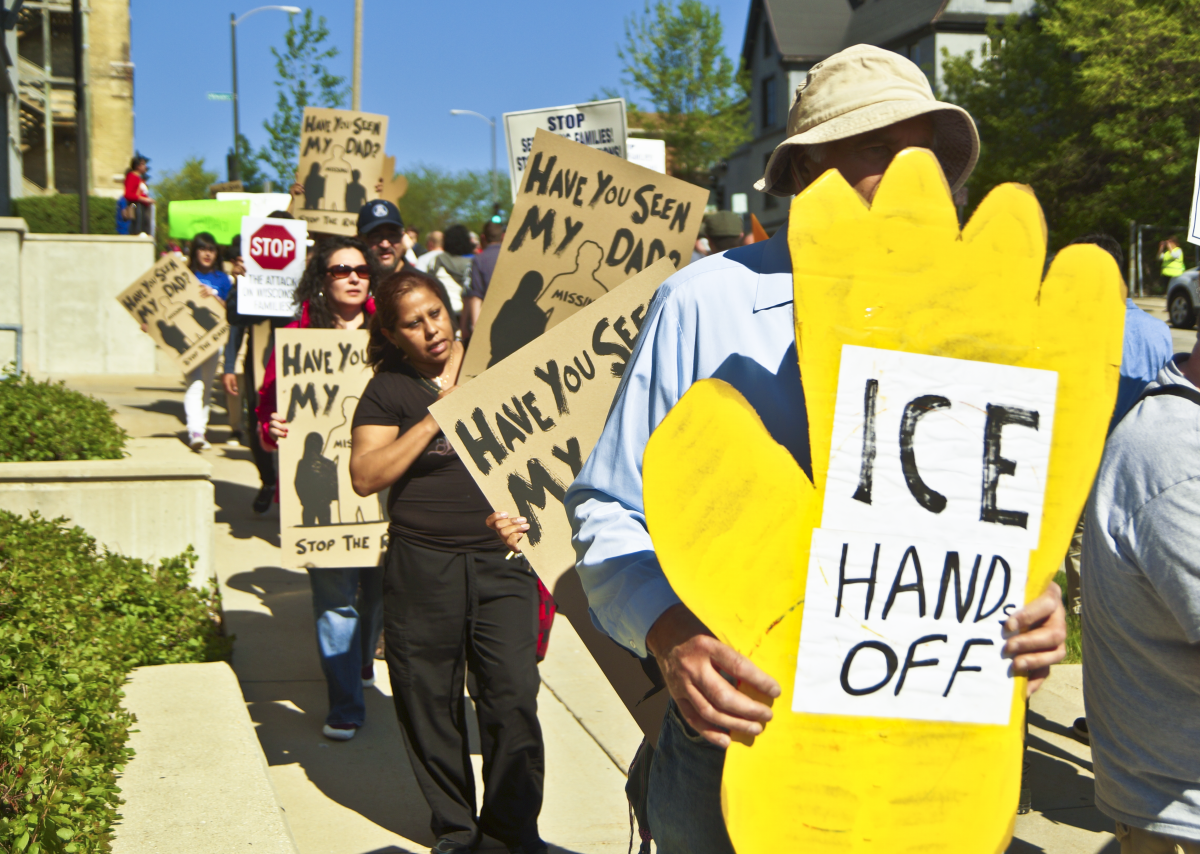 Every major union in the U.S. has immigrant members, documented and undocumented. Stewards need to be familiar with the ways these workers may be terminated—or worse still, detained. Photo: Joe Brusky (CC BY-NC 2.0), from a rally at the Milwaukee ICE office after raids in 2014

Every major union in the United States has immigrant members, documented and undocumented.

Union activists and staff who represent these members need to be familiar with the ways these workers may be terminated—or worse still, detained—as a result of challenges to their authorization to work in the U.S.

In 2017 the AFL-CIO came out with an invaluable toolkit of materials to assist unions in responding to these challenges. More on the toolkit later, but first a quick review of how challenges to work authorization typically happen.

It all starts with the I-9. Federal law requires all employers to obtain documentation from newly hired employees that identifies them and shows they have authorization to work in the United States. The employer uses this information to complete a federal IRS Form I-9.

Employers are generally not required to re-verify I-9 documentation, but the stepped-up immigration enforcement of the previous three presidential administrations (the current one especially) has meant that an increasing number of immigrant workers are being subjected to re-verification.

Though this kind of mismatch most commonly occurs with native-born workers (a 2006 report by the SSA Inspector General estimated that 70 percent of these errors belong to native-born U.S. citizens), these discrepancies are much more likely to generate a no-match letter for foreign-born workers.

The letter requests that the employer provide the correct information within 60 days, but also states that it does not address the employee’s work authorization and is not to be used as a basis for adverse action such as termination or suspension.

Despite that, employers often react to such letters by immediately issuing ultimatums to the named employees: provide a valid number within a matter of days or be terminated.

Employer decides to voluntarily audit itself or sign up for E-Verify.

In some cases, an employer is required to re-verify a worker’s authorization to work because one of the documents the worker originally submitted as proof of work authorization has expired.

But it’s also the case that employers often use self-audits as a means of targeting immigrants who exercise their rights in the workplace—despite the fact that a number of federal laws, including the National Labor Relations Act, prohibit such retaliation.

One tactic these employers frequently use is to suddenly sign up for E-Verify, a federal program that an employer can use to electronically verify a new employee’s identification and work authorization.

Federal contractors are required to use E-Verify. Arizona, Mississippi, Alabama, and South Carolina require all employers to use E-Verify, while other states may require it of certain sectors.

The program is notoriously error-prone. With the exception of certain federal contractors, the government bars employers from using it to re-verify current employees.

Preparing for a Workplace Raid

Excerpts from the AFL-CIO’s toolkit on workplace raids and audits:

1. Call a meeting to form a Rapid Response Team or network. Invite representatives of unions, immigrant rights groups or worker centers, clergy, attorneys, and United Way liaisons, among others.

2. Make sure all members are educated about their rights and have taken proper steps to protect themselves and their families. Make sure all workers are ready to follow the steps of the rapid response plan.

3. Engage employers to establish protocols for their interaction with ICE at the workplace. This can decrease the likelihood that ICE will be permitted into a worksite or that workers will suffer from immigration enforcement.

A union may bargain for contract language that, for instance, the employer will refuse admittance to any ICE agents who do not possess a valid warrant signed by a federal judge or magistrate, and that the employer will not disclose members’ names or addresses without a warrant.

5. Produce and distribute Know Your Rights materials and make sure all workers carry a palm card with the phone number of an emergency hotline or direct line to a legal advocate at all times. Fliers, palm cards, and safe workplace posters can be found online at adelantewerise.org.

6. Help workers prepare personal and family plans. Workers should keep important documents in a safe place, including passport, valid ID, and children’s school transcripts. Workers may sign a power of attorney for the care of their children.

The AFL-CIO toolkit “We Will Defend and Resist” includes legal and practical information on how to prepare for, and respond to, I-9 audits, no-match letters, and workplace raids. Get it at bit.ly/AFLtoolkit.

ICE issues a Notice of Inspection to the employer.

“Paper” raids, as they’re sometimes called, refer to cases in which Immigration and Customs Enforcement (ICE) issues a notice that the agency is demanding to inspect some of the employer’s I-9 forms and requesting that they be made available within three business days.

ICE might also take it upon itself to arrest and detain the named employees even before they’ve been given the opportunity to provide valid documentation.

HOW CAN UNIONS RESPOND?

Bargain good language in your contract.

First, unions need to get ahead of the threat by pursuing language in their collective bargaining agreements that addresses how the employer is to respond to Social Security no-match letters, self-audits, ICE “paper raids” and actual raids, and employee absences from work to address immigration issues.

The AFL’s toolkit includes model contract language in all of these areas. (Get it online at bit.ly/AFLtoolkit.) Unions that win such language are in a much stronger position to defend workers whose work authorization is called into question.

Inform members of their rights.

In the absence of strong contract language, unions should distribute “Know Your Rights” information to all their members (which is included in the AFL’s toolkit) in case they’re confronted by ICE in the workplace or anywhere else.

If the employer receives a no-match letter.

In the case of a no-match letter, the union should make clear to the employer that the letter is not proof that a worker lacks authorization and cannot be the basis for adverse action like termination or suspension.

Any adverse action should be grieved as a violation of just cause.

If the employer voluntarily self-audits or adopts E-Verify.

In the case of an employer voluntarily self-auditing, the union should demand to bargain and request a list of all the employees subject to the audit. Similarly, employers who unilaterally adopt E-Verify should find themselves on the receiving end of a demand-to-bargain letter—and the threat of National Labor Relations Board (NLRB) charges, should they proceed with implementation.

If the union files board charges, it should confirm with the NLRB that these charges trigger the protections of a 2011 Memorandum of Understanding between the Department of Homeland Security and the Department of Labor, the EEOC, and the NLRB. This memorandum is still in effect. It restricts DHS from engaging in worksite enforcement when there is a labor dispute pending investigation.

If ICE issues a Notice of Inspection.

If the union becomes aware of an ICE Notice of Inspection, it should immediately demand information regarding the notice, including:

If a union rep is questioned about a worker’s status.

In all of these situations, if a union representative is ever questioned about a worker’s status, he or she should say that the union presumes that everyone hired by the employer is authorized to work and that the union doesn’t ask about status because it’s not relevant to its legal duty of fair representation.

Ultimately, the only real solution to the crisis affecting the estimated 10.7 million undocumented people living in the United States is for immigrant activists and their allies to win a thorough reform of our broken immigration system.

In the meantime, every union with immigrant members should have a plan for how to deal with workplace authorization issues should they arise.

Guillermo Perez is a labor educator and president of the Pittsburgh chapter of the Labor Council for Latin American Advancement.

A version of this article appeared in Labor Notes #486, September 2019. Don't miss an issue, subscribe today.
Related
Viewpoint: Abolish the H-2A Program! »
Review: On the Line: A Story of Class, Solidarity, and Two Women’s Epic Fight to Build a Union »
Immigrant Textile Workers Win Long Strike Against 84-Hour Work Week in Italy »
Los Deliveristas Speak: How Delivery Workers Are Organizing to Take On the Apps »
Viewpoint: A ‘Union’ That Pushes to Deport People Is the Labor Movement's Opponent »