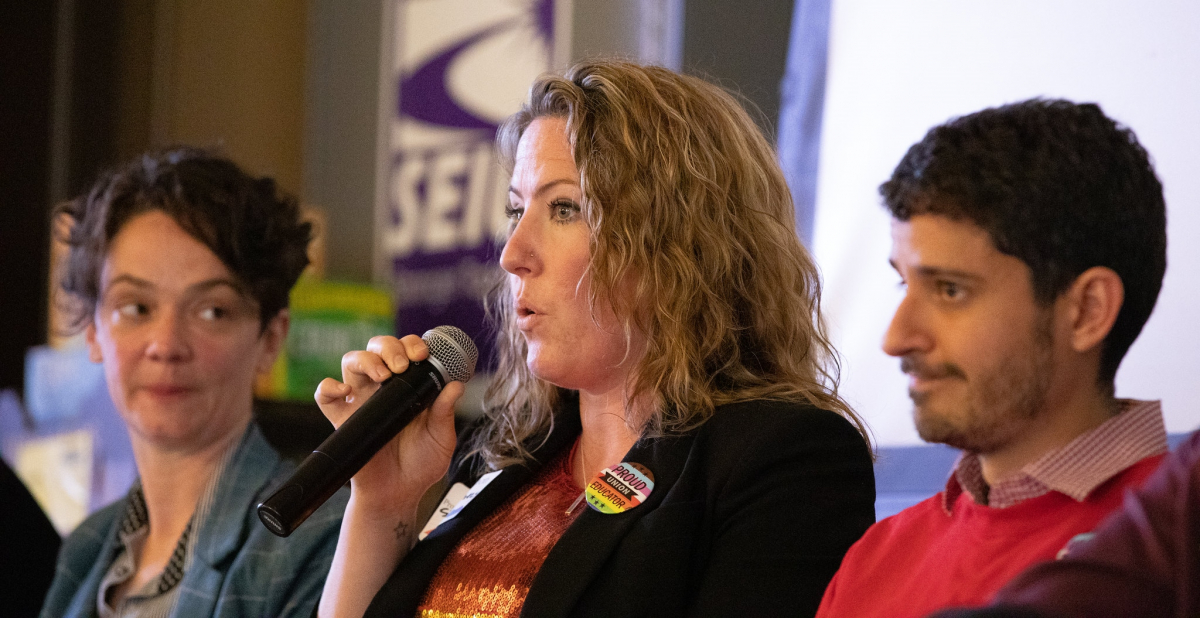 This summer marked the 50th anniversary of the Stonewall uprising, where police raids on a New York bar led to six days of protests and clashes, sparking the modern lesbian, gay, bisexual, and transgender movement. We decided to take a look around the country at some of the organizing by LGBTQ workers and allies in the labor movement today. Here’s a flavor of what’s happening in the post-marriage equality era. —Editors

LGBTQ workers continue to face discrimination and unemployment at higher rates than the population as a whole.

Nine percent of LGBT people in the United States are unemployed, according to UCLA’s Williams Institute, compared to 5 percent of the entire U.S. population. And 27 percent have limited access to adequate food, compared to 15 percent.

So you might expect unions and LGBTQ organizations to be spending lots of time and resources supporting workers fighting for fair access to good jobs.

But on the contrary, says the new National LGBTQ Workers Center, mainstream queer and trans rights organizations are not attentive to economic justice issues—and the labor movement is frequently out of touch with LGBTQ workers.

For the 5.4 million LGBTQ workers in the country, federal anti-discrimination protections are limited.

The Civil Rights Act offers some protections on sexual orientation and gender identity, but these protections are facing possible reinterpretation by the Supreme Court.

Only about half the country has nondiscrimination laws at the state or local level.

The worker center was founded last year by Joan Jones, a former Service Employees (SEIU) organizer and educator, and seven other LGBTQ people of color. It’s headquartered in Chicago and entirely volunteer-run at the moment. The group is seeking new board members and Chicagoland planning committee members.

“What we don’t want is to create another microcosm of the labor movement where people feel left out,” said Jones.

The group aims to develop a mass membership base, with leadership specifically from those sections of the LGBTQ community that are most marginalized: people of color, especially Black people, and transgender people. There are 2 million LGBTQ people of color in the United States.

It also plans to create a hotline in Illinois for workers to report discrimination on the basis of sexual orientation or gender identity. Through this hotline, the center hopes to map where discrimination is taking place, support workers who feel isolated, and bring together LGBTQ workers who work in the same industry or the same neighborhood.

The group’s first major step was a recent study on LGBTQ workers conducted with the Movement Advancement Project. Next up will be an economic justice summit in Chicago in September. Participants will discuss what a movement for economic justice for the LGBTQ community looks like.

The Eastern Massachusetts chapter of Pride at Work—an AFL-CIO-affiliated caucus—also organizes LGBTQ workers, but its work is more rooted in the institutional labor movement.

“We don’t want to silo ourselves off as LGBT workers and union activists,” said Gerry Scoppettuolo, a retiree with a background as an organizer for SEIU and the Teachers (AFT).

The group organized an open forum in June. Forty people showed up to discuss the history and activities of the Pride at Work chapter and issues like workplace harassment, discriminatory firings, and how to teach management and co-workers the basics about gender issues. The forum also covered subjects that affect all workers, like hours and wages. Young workers mostly not in unions got a chance to learn about building power as LGBTQ workers.

The organization has also joined picket lines at the 2018 Marriott hotel strike and helped workers at a local bookstore to develop contract language. A chapter member and other LGBTQ workers who are members of Auto Workers Local 1596 at Harvard Book Store (not affiliated with Harvard University) led an effort to resuscitate their inactive union, institute gender-neutral language throughout the contract, and include gender identity in the nondiscrimination clause.

The chapter’s priority is organizing. “We want to support and organize LGBT and other workers irrespective of a union being present,” said member Hersch Rothmel, an organizer at SEIU Local 888.

Pride at Work Eastern Massachusetts has close ties with Lyft and Uber drivers who are organizing, and has met with baristas at several coffee shops. “We are organizing these workers by identifying workplace issues and leaders,” said Rothmel.

In Portland, Oregon, 80 LGBTQ workers from two dozen unions came together June 21 for a summit.

It was the sixth installment in an annual series of events on bias organized by the law firm Diamond Law. While this event focused on anti-LGBTQ discrimination, others in the series have focused on gender or race.

The summit offered legal training, tips on bargaining and organizing, and personal perspectives from LGBTQ union members on their activism. In a session on developing better contract language, participants discussed how to expand the employer’s responsibilities to proactively protect employees from implicit bias.

“Right now, contractual anti-discrimination provisions say you can’t break the law,” said attorney and trainer Barbara Diamond, an organizer of the event. “They don’t give anybody any rights beyond compliance with laws.”

Participants developed model contract language including a transgender bill of rights which would articulate a plan for gender transition, a right to nondiscrimination, and a right to medical services that transgender workers need. One line reads, “The employer shall not discriminate against any employee because they are transgender or non-binary, whether standing alone or in combination with other factors such as race or disability.”

Sarah Laslett of the University of Oregon’s Labor Education and Research Center helped develop the curriculum for the workshop. She said a particular focus was on how to make the issues of LGBTQ workers “more deeply felt and more widely felt.” That is, how do you get the majority of workers to care enough to take action on issues that don’t affect them personally?

“It depends on whether workers have done that internal organizing” to ensure that language benefiting minority groups in the union sticks through the difficult bargaining process, she said.

Internal organizing around minority issues isn’t “rocket science,” Laslett said. It’s about one-on-one conversations, mapping the workplace, and charting. But she said it’s hard to point to good examples of such organizing because they aren’t well known. She expressed hope that work like the summit would “allow the door to crack open.”

Saurav Sarkar is a former Assistant Editor of Labor Notes.saurav@labornotes.org
Related
Collectively Fabulous »
'We Took Care of Each Other': A Maritime Union's Hidden History of Gay-Straight and Interracial Solidarity »
For Pride Month, Here’s Your Definitive Reading List on Queerness and Work »
Duke University Press Workers Organize with NewsGuild »
A Candid Conversation About Queers in the Labor Movement with Longtime Union Activists Miriam Frank and Desma Holcomb »