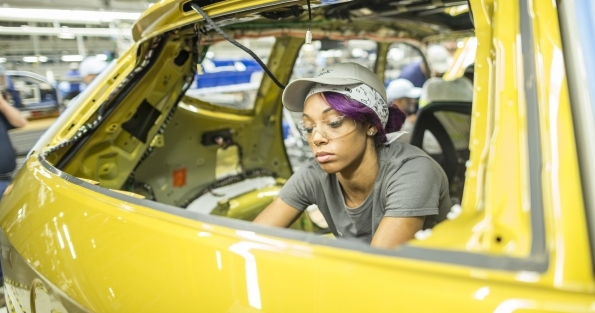 In a week of frenzied developments in the organizing drive at the Volkswagen plant in Chattanooga, Tennessee, the National Labor Relations Board tossed out the union's election petition, the Auto Workers (UAW) immediately refiled it, and the company announced it is removing the plant's unpopular CEO.

The Labor Board's decision gives the German automaker even more time to engage in the scorched-earth anti-union tactics commonly deployed by U.S. employers.

Workers at the plant are once again facing down fierce opposition from politicians and business-financed astroturf groups, just like in the ill-fated 2014 union drive.

But unlike last time, the company has joined the fray. VW’s ongoing anti-union actions—at the Labor Board and inside the plant—are at stark odds with its official claim of union neutrality.

In a letter to employees, Volkswagen announced today that Antonio Pinto, the CEO of the Chattanooga plant, will be leaving the factory "in the coming days" and will be replaced by Frank Fischer, who previously worked as the chief executive in Chattanooga from 2008 to 2014.

Announcing a sudden shake-up in management is a common union-busting tactic. The idea is to convince workers that the company recognizes there are problems, but is making changes that make unionization unnecessary.

In a different rendition of the same tune, supervisors handed out anti-union flyers last week stressing that workers should be grateful for the recent scheduling changes management made after surveying the workforce—an action that likely violated federal labor law.

The company also today repeated its claim to be neutral.

HEADS I WIN, TAILS YOU LOSE

The union petitioned on April 9 for a plant-wide election. But VW persuaded the Board to postpone the vote, and on May 22, the Board’s Republican majority granted VW’s motion to dismiss the petition on a technicality of timing.

Volkswagen argued that a vote could not take place because the UAW already represented a subset of workers at the plant. After losing a plant-wide vote in 2014, the union won a 2015 election to represent 162 skilled trades workers.

Ironically, the company refused to bargain with this group, and took to the courts to appeal the election, arguing that the only appropriate bargaining unit would be a plant-wide unit—exactly what the UAW is seeking this time around. The union disclaimed the smaller unit on April 15, hoping to clear the path for an election among all 1,709 hourly workers.

But petitioning for the unit VW wanted wasn’t enough for the company or the Trump Labor Board. The latter affirmed VW’s stalling tactics, reasoning that the union needed to disclaim the smaller unit before filing a new petition. “‘Heads, the employer wins; tails, the union loses’ cannot be the Board’s new motto,” wrote Board member Lauren McFerran in a frustrated dissent.

“This an example of how agenda-driven this Board is," said retired union lawyer Gay Semel. “The lesson here is that any time this Board is faced with an issue that does not involve black letter law, they will find a way—no matter how distorted the logic—to rule for the employer and against the union.”

Overseeing the company’s legal conniving is the notorious union-busting law firm Littler Mendelson, which helped Nissan defeat a 2017 union drive in Canton, Mississippi. One of Trump’s two appointees to the Labor Board was a partner at the firm, though he did not rule on the VW case. The firm is also advising a vigorous anti-union campaign inside the plant.

For years the media has uncritically repeated Volkswagen’s professions of neutrality towards unionization at the Chattanooga plant. But the company made a 180-degree turn on the question in 2015 after the “dieselgate” scandal, which cost the company billions.

Volkswagen was found to have installed “defeat devices” on over 11 million so-called clean diesel cars. This software allowed its automobiles to pass emissions tests while pumping lethal levels of toxins into the atmosphere—up to 40 times the legal limit.

Scientists believe that the company’s criminal behavior put the public at serious risk and likely led to premature death for hundreds of people.

A number of high-ranking VW executives have been charged criminally in this scandal, including former CEO Martin Winterkorn, who was arrested by German authorities.

When the news broke, the company lost 37 percent of its value. And in 2017 a U.S. federal court fined Volkswagen $2.8 billion, the largest fine the government has ever negotiated for an automaker. In total, the company has had to pay up to $30 billion in fines from around the world.

Given the financial stress and shareholder outrage, it seems likely that the company is fighting the union to better preserve management’s authority and to maintain its low labor costs—the lowest of any automaker in the U.S., according to a 2015 study by the Center for Automotive Research.

CORRECTION: An earlier version of this story misstated the year of the original union election at the Chattanooga plant as 2013. It was 2014.