Journalists at the L.A. Times joined the NewsGuild in 2018, a big victory at a notoriously anti-union employer. A leader of that campaign, Jon Schleuss, is challenging incumbent Bernie Lunzer to head the Guild. Credit: L.A. Times Guild.

A flagging union has found new hope in a flurry of organizing victories. Now in the union’s presidential election, members are mulling what’s the best way to keep growing—stick with the incumbent, or replace him with a young leader from last year’s biggest organizing drive?

Jon Schleuss, 31-year-old challenger to head the 20,000-member NewsGuild, led the 2018 drive at the Los Angeles Times. The landslide there was a breakthrough for the union, kicking off a banner year of growth.

Schleuss first tried contacting the NewsGuild through a union website that’s “very old and a little glitchy,” he said. He’s full of ideas to bring the union up to date. The website, for instance—why not offer a searchable database where members could compare contract language from around the country?

He argues for an aggressive social media strategy and that vacant positions for communications director and collective bargaining director should be filled.

“Jon led this incredible organizing drive that unionized a newspaper that the Guild was unable to crack for many decades,” said longtime NewsGuild activist Randy Furst, a reporter at the Minneapolis Star-Tribune for 46 years. 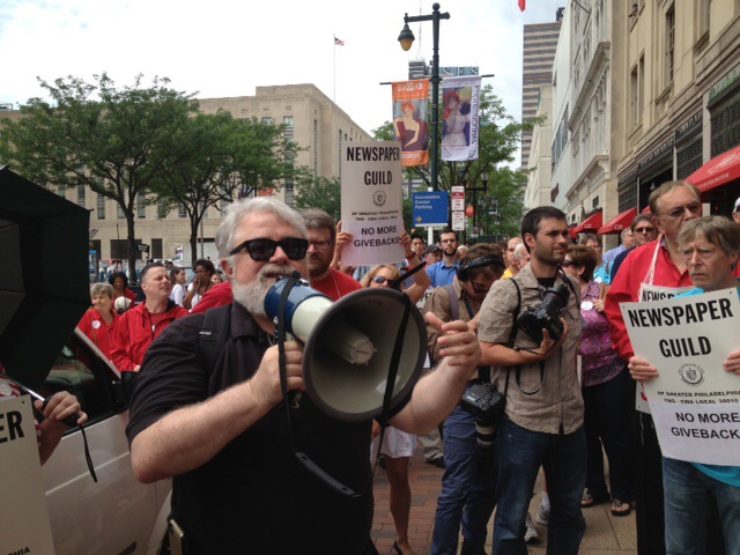 Incumbent Bernie Lunzer has headed the NewsGuild since winning a contested race in 2008. Photo: Buildingtheguild.org

Incumbent President Bernie Lunzer, age 61, has been a national officer since 1995, first as secretary-treasurer and then as president.

But “I object to the narrative that Bernie is the old guard that’s getting in the way of new energy,” said Nolan Rosenkrans, an assistant city editor at the Toledo Blade. “My experience has been the exact opposite.”

When Rosenkrans became local president, he said, Lunzer offered him support and coaching, and pushed the Toledo and Pittsburgh locals to coordinate their strategy at papers owned by the same company.

Lunzer has also been the driving force for coordinated bargaining at GateHouse Media, one of the country’s biggest publishers.

The reason there are vacant positions at headquarters, Lunzer said, is a 25 percent budget cut imposed by the NewsGuild’s parent union, the Communications Workers (CWA), because of the Supreme Court’s decision in Janus v. AFSCME.

“We didn’t want that. We fought it,” he said. “Jon has said he would demand those positions be filled. It just doesn’t work like that.”

The NewsGuild president is directly elected by the members. Some locals are offering mail ballots, while others are holding in-person votes. Ballots are due back May 13.

Growth is crucial to the union’s future. U.S. newspapers cut their staffs by more than half between 2001 and 2016.

“The NewsGuild really cannot survive unless it reverses its membership decline and organizes places that have never been organized before,” said Donna Cartwright, who put in 37 years at the Baltimore Sun and New York Times. She is supporting Schleuss.

The economics of the news business shifted dramatically as traditional sources of ad revenue dried up—full-page spreads from department stores, for instance, and the classifieds. A long-term solution might involve publicly funded media or forcing Facebook and Google to help pay for the industry they’ve undermined.

That said, plenty of media companies still turn a profit and pay their executives handsomely. “People who blame the decline of newspapers on the internet, that’s only partially true,” said L.A. Times reporter Bettina Boxall. “A much greater factor is years of corporate greed and mismanagement.”

For years the union did little new organizing; if anything, the Writers Guild of America was eating the NewsGuild’s lunch. Then something changed. In 2015-2017 the NewsGuild added a few hundred new members each year.

And last year was a whopper—1,426 people joined, at 21 shops including The New Yorker and New Republic magazines, the Hampshire Daily Gazette and Omaha World-Herald, and Mic.com and Rewire News.

The L.A. Times was a huge bargaining unit by NewsGuild standards, 389 people, at an employer that’s been notoriously anti-union for a century.

Journalists soon followed suit at other papers under the same owner: the Chicago Tribune and papers in Virginia, Maryland, Pennsylvania, and Connecticut. This chain, Tribune Company, accounted for more than 800 new members in 2018—a majority of last year’s boom.

Lunzer’s supporters say he deserves credit. He wangled a grant from CWA to hire two organizers who have worked on the drives.

John Hill, an outgoing regional vice president, said, “When this tide turned and the environment changed, we didn’t have to catch up with it. We were poised and ready. He saw it coming.”

But L.A. journalists say they clashed with international staff and preferred the help they got from an organizer loaned by the New York local. They used their investigative skills to research their employer, exposing pay disparities, self-dealing, and use of a private jet.

“Their approach was really fairly old-fashioned, the way things had always been done,” she said.

Lunzer acknowledged the union made mistakes. He also called the L.A. journalists a “very demanding group” who refused his repeated offers to mend fences.

Ironically, about 2,000 recently organized members won’t get to vote. New members aren’t required to pay dues until they secure a first contract. But to be eligible to vote, you had to be a dues-paying member by last fall. 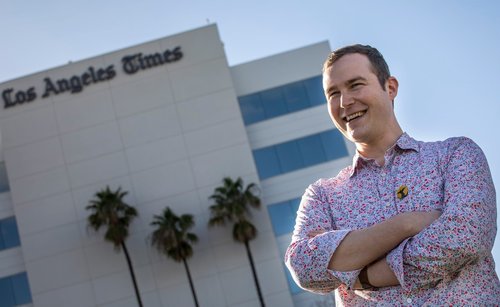 Jon Schleuss, the challenger, was a leader in the L.A. Times union drive. Photo: jonforpresident.com

The case for Lunzer rests on his 11 years’ experience at the union’s helm. Rosenkrans doesn’t see how Schleuss, who has never been an officer or bargaining committee member, could help him with complex negotiations.

“You’re not just the president of the union,” Hill said. “You’re the trustee of two pension funds and a member of the CWA board.”

It’s rumored that CWA might reorganize, merging affiliates into its geographic districts. Lunzer’s supporters say he is best positioned to preserve a distinct identity for media workers inside CWA, perhaps by partnering with another affiliate, the Broadcast Employees and Technicians. “He knows everybody at the table,” Hill said. “He knows how to make that argument.”

But Schleuss’s backers see an upside to an outsider. “I would prefer to have an organizer at the helm than a bureaucrat,” said Chris Serres, a reporter at the Minneapolis Star-Tribune.

Schleuss sees the organizing at Tribune Company papers as a grassroots movement. Journalists from L.A. flew to other cities on their own dime to help get organizing off the ground. That’s one of his campaign themes—that the union should use its members’ skills and energy.

He won over Serres. “The message Jon had,” Serres said, “was we have all these investigative journalists, and why don’t we use those skills to go after these rapacious owners?”

Most NewsGuild locals are too small to afford many staff, so they rely on the international—which is stretched thin, with only five reps. Journalists at the Chicago Tribune won their election in May 2018, but almost a year later, they haven’t had a single negotiating session.

Lianna Fader of the New Yorker said members from the newly organized shops have a group on the online chat channel Slack where they share mobilizing plans as they pursue first contracts. “There’s no reason we couldn’t build this into the union at large,” she said.

Shannon Duffy, on the other hand, sees bargaining strategy as one of Lunzer’s strengths. Duffy is on staff at a St. Louis local. After two GateHouse papers in Illinois unionized in 2012 and 2013, he spent years in fruitless bargaining for first contracts.

“GateHouse has quietly become the largest chain of daily newspapers in the U.S.,” he said. “They take over a paper, gut it like a fish, lay off all these people, then pay themselves bonuses for finding efficiencies.”

The local asked the international for help putting together a corporate campaign. When the union got shareholders to pass a resolution about GateHouse’s board structure, that gave enough leverage to finally get corporate to the table.

Lunzer stepped in to bargain a global agreement, since there were 14 other NewsGuild locals in talks with GateHouse. After a decade-long drought, in 2017 all 16 papers got a raise.

Meanwhile back at the L.A. Times, Schleuss has been heading up the mobilization for a first contract. Forty activists rally their co-workers for T-shirt days and rallies.

Last summer a local multi-billionaire bought the paper. Instead of continued layoffs, the Times has been hiring; the unit has expanded to almost 500 members. Reports from bargaining are upbeat.

“Before we formed a union there was a plan to cut the newsroom by a quarter,” Schleuss said. “We stopped the layoffs. Now we’re in the final stages of our contract and we’ve seen enormous growth in our newsroom.

“People understand they have control and power. That just wasn’t the case three years ago.”

A version of this article appeared in Labor Notes # 482. Don't miss an issue, subscribe today.