‘People Are Starting to See That Winning Is Possible’: Denver Teachers Win, Oakland Next 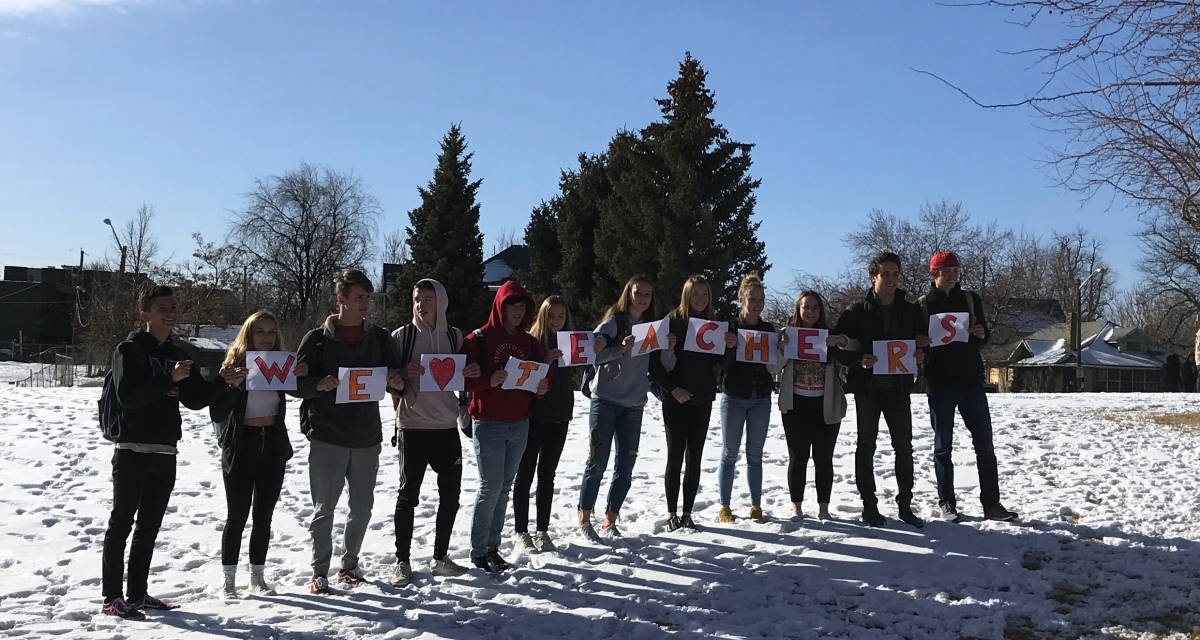 Oakland teachers, meanwhile, have announced they will strike February 21.

The new contract in Denver will put more money into base pay and into steps and lanes, which reward teachers for their years of experience and level of higher education.

Before this deal, teachers had to rely on shifting bonuses that depended on their students’ test scores.

“The education reform people are putting a lot of effort into holding on to the merit pay,” said high school teacher Tiffany Choi during the strike. “If we get this, we can take on the evaluation system and the standardized testing.”

The union got the district to add $23 million more for teacher pay, meaning an average 11.7 percent raise for the district’s 5,500 teachers, nurses, and counselors. The district’s proposed 30-step salary schedule was reduced to 20 steps, meaning teachers will get bigger raises sooner. Merit pay was reduced to three bonuses available to teachers in high-poverty schools.

“Pay for performance” has been a popular goal of corporate education reformers. The idea is that dangling incentives in front of teachers will motivate them to do better by rewarding them for their students’ test scores. Obama’s Race to the Top offered federal funds if districts got teachers into merit pay systems.

Chicago Mayor Rahm Emanuel tried to push it on Chicago teachers, and they went on strike in 2012 in part to fight it off. That same year, Newark teachers accepted merit pay in a contract settlement praised by national union president Randi Weingarten and Governor Chris Christie. Baltimore and New Haven teachers also agreed to it.

Denver’s merit pay system predates all of these. After a pilot program was introduced in teachers’ collective bargaining agreement in 1999, the union and the school district agreed to expand the scheme districtwide in 2004. The union president, Henry Roman, took part in designing the ProComp system, which was funded through a tax hike.

But over a decade later, teachers reported that the pay-for-performance system had created chaos. In a city with skyrocketing rents, teachers can’t predict their earnings year to year—leading to high turnover as teachers seek work in other districts where pay is more stable or leave the profession altogether.

Like many other recent strikes in urban school districts, the Denver and Oakland strikes are a revolt against more than a decade of underfunding and against the corporate-style education reform that spiked after 2008.

The Denver district brought in superintendents who closed public schools to open charters and shifted to a “portfolio” model, encouraging parents to “shop” among competing schools. Alongside traditional public schools, Denver has “innovation schools” that opt out of district and union policies, as well as privately managed charter schools.

Los Angeles teachers put the portfolio model on blast after news leaked that investment banker Superintendent Austin Beutner planned to apply the model there. Union leaders pointed to the experience of Denver, among other districts, to show how it destabilizes public schools. In the lead-up to their six-day strike in January, the L.A. teachers won public support for their own plan to improve schools—by shrinking class sizes, adding more support staff, and curtailing charter expansion. Before Beutner could even propose the portfolio model, the strikers had forced the school board to agree to instead back a statewide moratorium on charters.

The Denver union built towards this strike over 15 months. The target was the ProComp agreement, which expired in January and covers salary for all teachers except the 300 still on the traditional salary schedule.

Pay was the only issue on the table. The teachers had already settled other working conditions in their master contract.

An emerging caucus whose members ran for union leadership in 2017, the Caucus of Today’s Teachers, made a point of criticizing merit pay. Some of its members won spots on the union’s executive board, and they brought increased activism to the campaign.

DCTA turned an open meetings law, brought about by anti-union interests, into an opportunity, inviting members and parents to bargaining sessions and livestreaming to an online audience. Bargaining sessions became standing-room-only.

In an already “right-to-work” state, the strike campaign became a union-building campaign. Membership grew from 51 percent two years ago to 65 percent, including a boost of 200 members before the strike vote and another 100-member spike after Day Two of the strike. The union reported that 3,700 teachers struck—more than 65 percent.

Like in Los Angeles, striking teachers in Denver picketed at their schools, held signs at street corners, and marched downtown. Students took videos of their own protests inside schools run by substitutes and administrative staff, and joined strikers outside.

Teachers worked to overcome the district's scare tactics, including threats to report teachers who work on visas to immigration authorities. Management tried to get the governor to delay the strike, but he declined to intervene. The district even threatened to hire scabs: federal workers furloughed during the government shutdown.

The new agreement lasts through 2022, when the ProComp and master contracts will expire at the same, giving teachers the opportunity to nix the separate pay-for-performance contract altogether.

Meanwhile in Oakland, teachers are set to begin their strike on February 21. They have been building support to strike for raises, class size limits, and caseload caps for special education.

To boost participation, the union shifted how it conducts strike votes—votes were held at every school rather than at a citywide meeting. Eighty percent of members voted, and 95 percent of them voted to strike.

The district has responded to teachers’ demands by crying poverty and announcing plans to close 24 schools.

Charter schools have drained away 30 percent of Oakland students, the highest percentage of any district in California, diverting $57 million from public schools.

“It does seem like the district is broke on purpose,” said special education teacher Bethany Myers, picking up a catchphrase that Chicago Teachers Union leaders popularized. “Employers are always broke when it’s time to negotiate.”

Where could Oakland find the money to pay for teacher raises and smaller classes? Myers pointed not only to charters, but also to money spent on administration and consultants.

ALL HANDS ON DECK

Oakland teachers have been reaching out to parents, lining up churches to serve as “strike schools,” and raising money with supporters to help feed students while the strike is happening.

Like the unions in Los Angeles and Denver, the Oakland Education Association has seen a boost in member participation. “Every room is full of people,” Myers said of the union office. “I want it to stay like this.”

Three hundred Teach for America alums signed a protest letter after 58 TFA-placed teachers were told they’d lose up to $2,000 in grants if they joined the strike. And when union leaders got wind of a call to hire short-term substitutes at the Oakland police station, they rallied 50 teachers and supporters to picket outside, and no scabs entered. Supporters also signed up online for interview slots, then no-showed.

Oakland teachers were already in motion when the Los Angeles teachers walked out—but the locals have been working together, and the L.A. strike lit a fire under members, Myers said: “People are starting to see that winning is possible.”