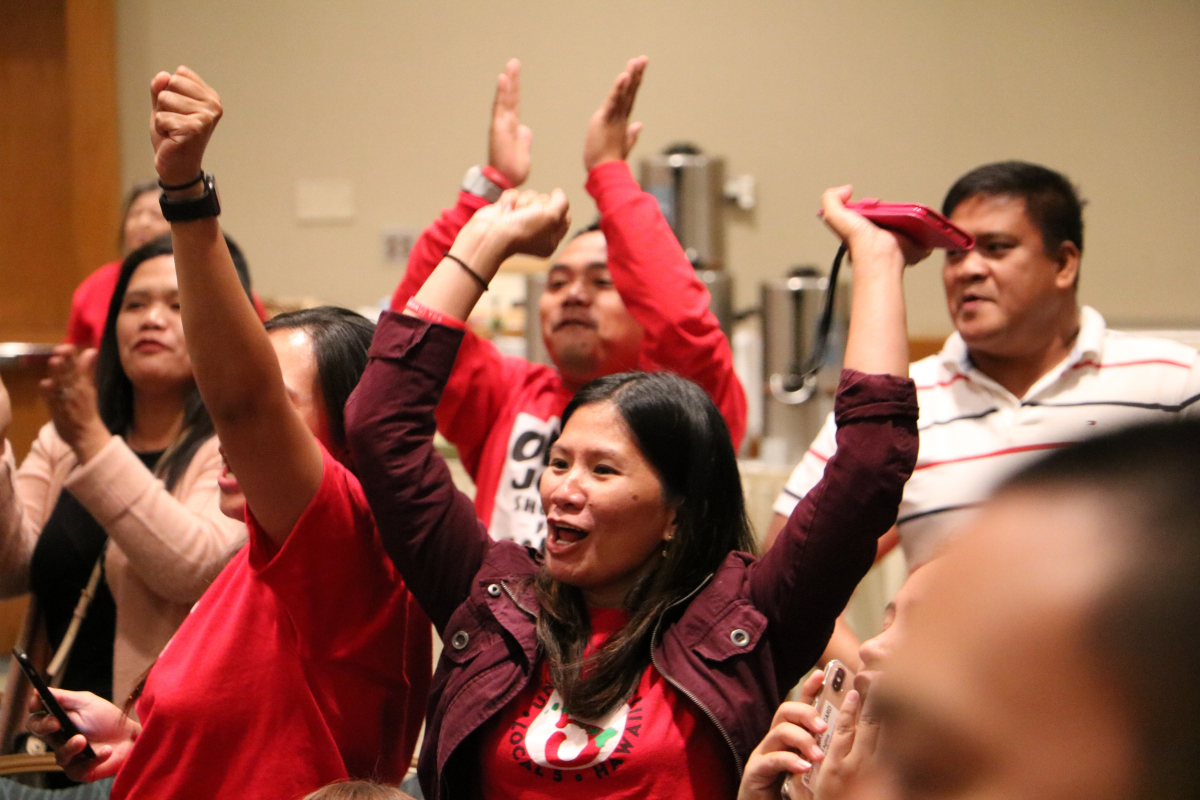 Thousands of hotel workers in seven cities struck at the same time under the same banner: "One job should be enough." Photo: UNITE HERE Local 5

After two months of strikes, workers at the largest hotel company in the world have won their biggest demands and set a new pattern for the hospitality industry.

Their common demands focused on three areas—job security, workload, and wages and benefits—and the slogan, “One Job Should Be Enough.”

Employees stopped Marriott from making them choose between wages and benefits. Details varied local by local, but across the country they won on both.

In San Francisco and Hawaii, workers won $4 raises over the four-year contract. San Diego workers got a 40 percent increase. In Boston, they got 20 percent. Boston, Hawaii, and San Francisco also won increased pension contributions and maintained or improved their health care.

Many of these cities have a very high cost of living. “We cannot pay the bills on what we are making,” said San Francisco housekeeper Candida Kevorkian, who was picket captain at the Westin St. Francis. (Marriott includes the Westin and Sheraton hotel chains.)

San Francisco’s Local 2 was the last to come to an agreement. Picketers there braved not only the weather but also the wildfires that for weeks filled the Bay Area air with smoke.

“It was a fight every day,” Kevorkian said. “We had to deal with rain, smoke. We had to wear masks.”

TAKE A LOAD OFF

Another key issue was workload. Workers won new protections against overwork and understaffing.

Hotel workers won relief from Green Choice, a Marriott program that encourages guests to help the environment by skipping housekeeping. That may sound benign, but housekeepers say the program is really an excuse to cut staff and doesn’t take into account that a hotel room that hasn’t been cleaned for three days requires more work than one that gets cleaned each day.

Where Green Choice is used, UNITE HERE locals won first-time contract language about the program’s impact on workers. The union didn’t end the program, but “we got our foot in the door,” said Boston UNITE HERE Local 26 President Brian Lang. Housekeepers will get more time to clean “Green Choice” rooms, and be assigned fewer rooms overall.

Honolulu Sheraton cook Jenny Johnson said housekeepers often work through their breaks to finish their required rooms. At a beachfront hotel, when a family stays in one room for multiple days, there’s a lot to clean.

By 2020, Hawaii housekeepers will have only 14 rooms to clean instead of 15. Johnson estimated that her hotel will need 20 more housekeepers to adjust—especially when the union housekeepers stop working through their breaks.

“That translates to job creation,” she said.

In Boston, where scheduling was a big issue, the settlement included protections against last-minute changes. “If you are on the schedule, you stay on the schedule—they can’t take you off,” said Courtney Leonard, a server at the Westin Boston Waterfront.

Boston workers also won maternity and paternity leave, and protections for pregnant and undocumented workers. Hawaii workers won protections for nursing mothers to take breaks. Johnson says they are already eyeing paid family leave for their next round of bargaining.

All the locals won the right to negotiate over how technology affects hotel workers, a major concern as they can potentially be replaced by online services, computers, and even robots. Now if Marriott plans to bring in new technology or automation, it has to give 165 days’ notice and bargain over the changes. Affected workers are entitled to be retrained—either to work with the technology or for new positions.

Protections against sexual harassment and assault were another victory in all the settlements. These include access to panic buttons and the guarantee that hotel guests who are accused of assaulting workers will be expelled from the hotel.

This was Boston’s first-ever hotel strike. Workers there decided in advance that a long fight, including a possible strike, would be worth it to set new standards for the industry.

“This is an example of where a group of workers began meeting a couple years before the contract expired,” said Lang. Local 26 had made modest gains without striking in the past, but union leaders asked workers whether they were prepared to do more this time.

“We can do that again, or we can really try to look at what are our aspirational demands, what do we really want for ourselves and our families,” said Lang. “Our members decided over a series of meetings to do it a different way—to organize and to fight.”

Heading into the strike, the seven locals had spent months bargaining with Marriott separately, with little movement on the union’s top issues. Then came the rolling strike wave, hitting Boston first.

Kevorkian was part of the two-year battle with 13 San Francisco hotels in 2004 that included two strikes, a seven-month lockout, and a boycott. Workers fought off a two-tier health plan and won increased coverage when they settled in 2006, after costing the hotel chains $50 million.

“This fight was completely different from 2004,” Kevorkian said, “because eight cities went on strike at the same time. We went national.”

Once workers were out on strike, the challenge was to increase pressure on Marriott and keep picket lines going.

Solidarity marches and rallies linked hotel workers across different properties in each city, and were coordinated across all seven cities so strikers didn’t feel isolated at their pickets.

To keep morale up despite the cold weather, strikers dressed up in costume on Halloween, and the unions organized Thanksgiving dinner on the lines.

The hotels took a financial hit as groups cancelled conferences or moved them because of pressure from the union. UNITE HERE created a website, MarriottTravelAlert.org, to help travelers avoid struck hotels. It reached out to tour groups directly to warn travelers that they would be crossing picket lines and services would be reduced, and to encourage them to cancel.

Struck hotels stayed open, but strikers reported management was offering guests coupons to go elsewhere for food and beverages, since the hotel restaurants had limited services. In Honolulu, guests said they found notes in their rooms informing them that they could find soap and towels on carts in the hall, and that if they wanted their trash taken out, they’d have to do it themselves.

Back at work, the strikers report a boost in workplace unity. Johnson said workers at the Honolulu Sheraton have already linked up across departments to stand up to post-strike retaliation.

“Instead of an individual just being left with their hands tied, we go together and say, ‘Let’s put an end to it,’” she said. Groups of workers have met with management in two departments about managers harassing returning workers and denying them their vacation time.

Leonard said the 46 days on strike in Boston created an intense bond among workers in her hotel, too: “We can go into the hotels proud of what we won and able to enforce it.”

As another wave of contracts expires in San Francisco, Los Angeles, and Boston, UNITE HERE is looking to the Marriott settlements as the pattern to match. “As far as we are concerned, this is the standard, this is what the deal is,” said Lang.

Members of Local 11 in Los Angeles voted by 96 percent to authorize a strike, after contracts covering 7,500 workers at 24 hotels there expired on November 30. And on December 12, hundreds of workers picketed outside four Los Angeles Marriott and Hilton hotels, demanding $25-an-hour starting pay.

Congrats to my labor brothers & sisters! I enjoyed marching & chanting with the Local 5 union when visiting Hawaii last month. They were loud, strong & I was happy to be so militant as we disrupted hotel management, kept tourists awake as our noise boomed through the canyons of Waikiki, & called for better wages & a decent contract. So strong it kept the pressure on. Now 2 months later, victory!

Marriott workers were fighting not only for their rights, but also for the rights of all hotel, restaurant and culinary workers. As an older Local 2 worker in San Francisco who depends on our health and welfare funds, I salute the workers who stood firm to preserve everybody's medical care and right to a pension.