Why Missouri 'Right to Work' Went Down in Flames 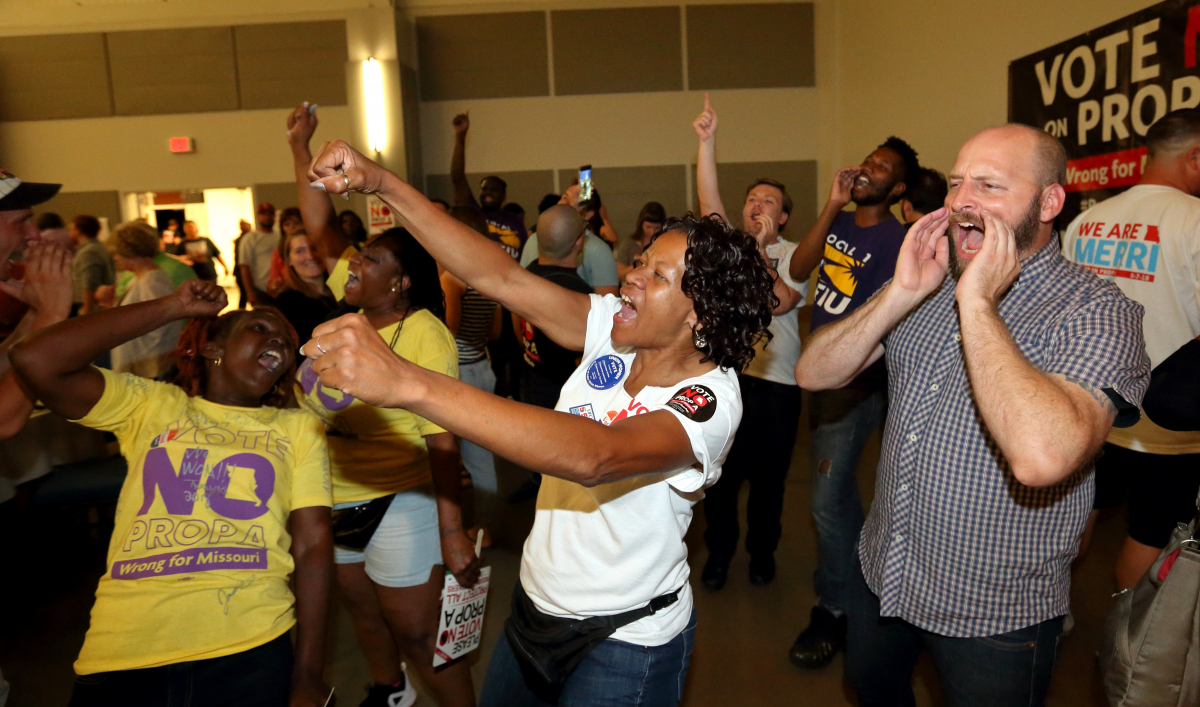 For years I used to say that when you looked at a map of Midwest “right-to-work” states, Missouri stuck into them like a thumb plugging a hole in a wall leaking sludge.

Then a flood of Trump votes netted us a hardcore anti-worker governor, Eric Greitens. The Republican-dominated legislature passed a right-to-work law almost immediately, and Greitens signed it in February 2017.

But Missourians have an unusual constitutional right to a “citizens’ veto” of unpopular laws. So unions began a petition drive to put it to a popular vote.

On August 18, 2017—just 10 days before the right-to-work law was set to go into effect—labor turned in 310,567 signatures, three times the number required to place the referendum on this year’s ballot.

In a partisan move, legislative Republicans moved the vote up from November to the August 7 primary, hoping to suppress turnout. But their maneuver didn’t work. An astounding 67 percent of voters rejected right to work.

Labor’s win in Missouri defies current wisdom about the decline of unions. We won with an even greater percentage of no votes than in the celebrated 1978 defeat of right to work in Missouri—despite the fact that union density has fallen by two-thirds since then.

Amazingly, even if none of Missouri’s quarter-million union members had voted, right to work would still have been defeated. Given the number of ballots cast in the Republican primary, at least a third of the no votes must have come from Republicans.

Only four counties favored Clinton over Trump in the last presidential election. Yet 100 of Missouri’s 115 counties voted no on right to work.

So how did we achieve such a magnificent rout of the billionaire, anti-union agenda?

The campaign didn’t really start until May. It was statewide and primarily volunteer-driven, though some paid canvassers were hired too. “It was a very personal issue for a quarter-million Missourians,” said Jessica Podhola, who took leave from her job at the Painters union to work on the campaign. “That’s what turned so many volunteers out.”

Teams of union and community volunteers went out daily, through merciless heat in July, talking to the same voters sometimes two or three times.

According to Podhola, who headed the campaign on the west side of the state, activists knocked on 870,000 doors and made a million phone calls.

My own experience canvassing in Kansas City was sweaty and positive. We were told not to lead with the term “right to work.” But when you asked people if they’d heard of Proposition A, they said, “No, what’s that?” When you said “right to work,” the typical response was “Oh, I’ll vote no.” We were targeting likely primary voters who were open to our message.

The campaign passed out 100,000 “No on A” yard signs all over Missouri. The Koch Brothers' Americans for Prosperity printed up signs at a union shop, probably by mistake. Rumor had it there were 25,000, but they had no grassroots organization to distribute them. Our side clearly won the sign war.

Missouri Jobs with Justice handled a lot of the community campaign. Its activists canvassed and phonebanked; its organizer met with community and faith leaders. Missouri Healthcare for All, with a database of 10,000, highlighted how Prop A would decrease access to health insurance for 75,000 adults and children.

Jobs with Justice even managed to involve nonmember groups who don’t usually weigh in on economic justice issues. The Missouri Sierra Club, for instance, did radio around the state.

The campaign’s messaging was mostly economic. What worked, according to many, was the simple message that right to work would hurt all working people, whether union or nonunion.

The campaign highlighted the fact that annual wages average $8,700 less in right-to-work states. It emphasized that Prop A was driven by wealthy special interests who benefit from exorbitant CEO pay, already 361 times what the rest of us make.

The other side will say they lost because of the money. It’s true that labor outraised them significantly, $18 million to $5 million.

But that ignores the millions that pro-right-to-work outfits spent to buy the legislature in the 2016 election—and the Koch money, which they didn’t have to report because they never mentioned Prop A in several very expensive mailings. One deceptive postcard implied it was from a union—it featured a scruffy worker saying, “Right to work ensures that my union keeps working hard to support me.”

They also spent $1 million on a failed petition drive to get a right-to-work constitutional amendment onto the November ballot.

Still, why didn’t they outspend labor?

Perhaps priorities shifted to the hot November Senate race, or Greitens’s scandal tarnished the issue. The governor resigned at the end of May; he was facing two felony charges, one for sexual misconduct with his hairdresser and the other for campaign violations.

Money aside, it’s clear that the right underestimated labor from the beginning. They didn’t think we would get enough signatures in the petition drive, let alone three times what was needed.

“We’ve been fighting right to work in Missouri for years, and groups like JwJ have been working a long time to build relationships,” said Richard Von Glahn, policy director at Missouri Jobs with Justice. “The National Right to Work Foundation thought this was a campaign about slick mailers and ads, and not about networks of relationships. They underestimated the ground game by labor and its allies.”

Labor’s ground game stumbled, though, on the issue of race.

Kansas City’s new airport project has seen tense negotiations between the developer and unions over the requirement for 35 percent participation by minorityand women-owned firms, half of which are nonunion. This fight so embittered some African American ministers and community leaders that they threatened to support Proposition A.

“Many in the community think the building trades is a bunch of good old boys who don’t understand the struggle of people in the community,” said Laborers Local 264 Business Manager Reginald Thomas, who is Black.

Community members pay taxes that go for public construction, Thomas said, but they don’t see people from their own community on the jobs. He added that there aren’t enough people of color in union leadership.

The No on A campaign didn’t send volunteer canvassers into the Black community. Instead, they contracted out that job to a company called Fieldworks. That left Thomas and Pat Jones to talk to community leaders.

Jones is a retired Teachers international rep and chair of the Kansas City branch of the A. Philip Randolph Institute, an AFL-CIO constituency group that promotes the participation of African American members in unions and acts as a bridge to the Black community.

“I had to come up with something to show them that all unions were not [just] building and trades,” said Jones. “They were painting unions with one brush. I did a lot of reminding of how unions made the middle class for us as African Americans.

“A lot of people may now be professionals and if you ask them who their parents were, who made it possible for them to be professionals, they were postal workers, firefighters, steelworkers. They all had someone in their families who were union members.”

Jones got APRI members to speak at their own churches. Congressman Emanuel Cleaver helped bring Martin Luther King III for a rally at a Black church. King helped counter the antiunion message, describing his father’s longtime opposition to right to work and his mother’s 1978 visit to St. Louis to rally against the right-to-work effort that year: “So in a way, I’m carrying on a family tradition.”

“We had no visibility in our community,” Jones said. “They [the No on A campaign] had written us off. But when you look at the vote, I think 79 percent of votes in Kansas City came from our community.” Black turnout was up, and No on A led it.

One lesson from the campaign is the importance of the right message. The other side tried to make it about unions. Our side made it about working people.

But the messenger was equally important. “I don’t know that it was messaging. I think [it was] just talking to people,” said Brian Simmons, a Machinist who came off the job to work full-time on the community campaign. “We’re still Missourians, we’re neighbors. Grassroots works if you have the time to slow down and talk.”

Von Glahn put it simply: “When we talk to voters, we win.” But he’s not sure labor will take the right lesson. He fears some labor leaders will see this victory as a reason to appeal more to Republican voters. Already labor councils have a category for endorsing “friendly incumbent Republicans,” meaning legislators who didn’t vote for right to work or to repeal prevailing-wage laws.

These same legislators often vote against the rights of minorities and women, and to cut state services to the needy and to lower taxes on the rich.

There’s a risk that the legislature in 2019 will vote for right to work all over again. To avoid that, labor needs to continue building a movement that reaches beyond union members.

We can do that by putting forward a progressive economic program and pushing democratic reforms. The two propositions on the November ballot are a good start: one would raise the minimum wage, and the other is a constitutional amendment to get money out of the legislature and end gerrymandering.

Thomas hopes the conflict between labor and the Black community was a wakeup call to union leaders. “Organized labor as a whole,” he says, “needs to wake up and realize this is our opportunity to build the relationship with the community.”

The late Jerry Tucker, a chief strategist of the successful 1978 campaign to defeat right to work, wrote in 2005, “The many-layered, multi-textured anti-right-to-work campaign stunned a fast-growing new anti-labor right wing in America. Unfortunately, the campaign’s architecture, its strategies, tactics, energies, and social dimensions, which had ‘movement-building’ stamped all over them, quickly and summarily wound up in a dusty trophy cabinet. The victory had given U.S. labor a momentary glimpse of its potential, and U. S. labor couldn’t handle it!”

Judy Ancel is a Kansas City labor educator. She produces the Heartland Labor Forum, a weekly radio show, and is on the leadership team of Kansas City Jobs with Justice.

A version of this article appeared in Labor Notes #474. Don't miss an issue, subscribe today.
Related
Richmond Educators Are First In Virginia to Win Bargaining Rights »
Janus for the Rails and Air? »
Viewpoint: Unions Aren’t Exclusive Clubs—We Fight for All Workers »
Missouri Voters Overwhelmingly Reject ‘Right to Work’ »
Viewpoint: How to Talk with Nonunion Workers about ‘Right to Work’ »

Well done. Now, EXPORT these tactics to the neighboring states, huh? And, UNION LEADERS...QUIT supporting politicians who DO NOT EMPHATICALLY state publicly their 100% support for unions, and union membership increase.