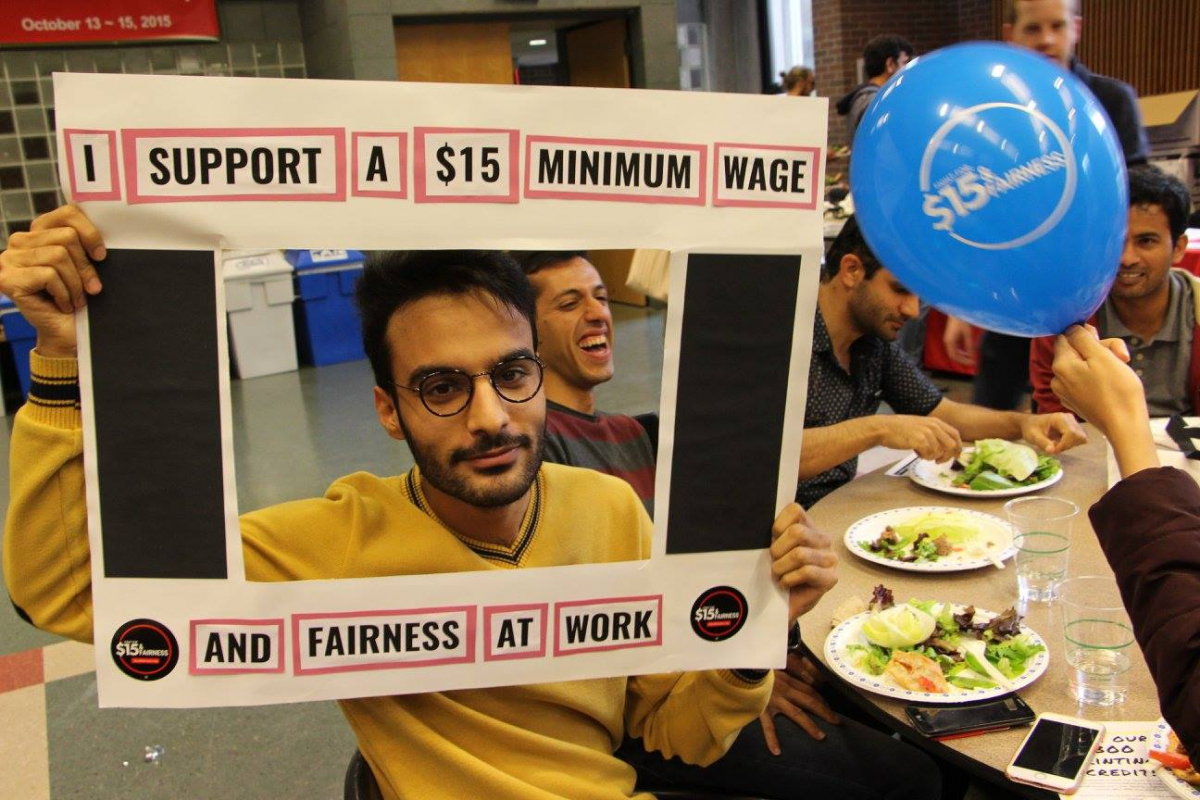 A strike by York University food service workers, with energetic student support, riveted public attention and built momentum for a $15 minimum wage in Ontario. Photo: Fight for $15 & Fairness - York U

Mainstream politicians often claim that we have to elect progressives to office first, before workers can win big legislation. Ontario workers and students just proved otherwise.

All told, 1.7 million people—nearly 30 percent of all Ontario workers—will get pay increases in one of the fastest implementations of a $15 minimum wage in North America. Ontario’s minimum will jump from $11.60 to $14 an hour (Canadian dollars) on January 1, rising to $15 the following year and indexed to inflation thereafter.

“This is a huge win for workers across the province, an amazing accomplishment,” said Dan Janssen, a Machinists union leader and activist in the Toronto Airport Workers' Council.

In 2013, workers and students began organizing to increase the provincial minimum wage from $10.25 to $14. Coordinated by the Toronto-based Workers Action Centre, activists in various cities organized creative demonstrations on the 14th of every month.

By 2014 the minimum wage had been frozen for four years with no inflation adjustment. So activists delivered 10-dollar bills and quarters, frozen in blocks of ice, to members of parliament, demanding that they “melt the freeze on the minimum wage.”

Big actions in Toronto complemented smaller events in rural communities, as participants built confidence and began to see themselves as part of a province-wide movement. The campaign established “a culture of organizing and getting people on the streets, talking not just to their buddies, but to new people,” said Deena Ladd, organizing coordinator for the Workers Action Centre.

“When you have 25 newspaper articles coming out covering 25 different actions,” she said, “people feel really excited about the fact that they’re not just six or 10 people in a tiny community in a rural area, but they are connected provincially.”

But the demand was undercut by the political establishment. Canada’s union-aligned party, the New Democratic Party (NDP), declared that $14 was too ambitious and advocated a $12 minimum instead. The governing Liberal Party pushed through a law in 2014 that increased the wage to $11, with future increases tied to inflation.

At that point, Ladd recalled, the government and even some movement leaders thought the issue was closed. “We were like, ‘No, no, no—we have to move this into the next level of fighting.’”

Two factors pushed the campaign forward, she said. First, the Fight for $15’s progress in the U.S.—“a rip-roaring, fantastic campaign going to the south of us”—and second, the heightened expectations that workers and students had developed through the campaign: “People said, ‘Well, you could bloody well have the minimum wage at $20 for all I care, because I’m only getting 10 hours a week. What are you going to do about that?’”

Rather than announce a new goal, the organizers pulled together group meetings of the campaigners around the province to discuss what the movement should be fighting for. After six months of community consultations, in early 2015 the Workers Action Centre launched a new coalition campaign, the Fight for $15 and Fairness, advancing six core demands:

The rebooted movement swung into action in the streets, connecting with prominent worker struggles. Members of Unifor at 28 Metro supermarkets in the Toronto area rallied around the $15 demand and won a new contract with big wage increases and minimum guaranteed weekly hours.

Toronto airport workers, coordinating with airport workers’ campaigns in the U.S., advanced their own demand for $15 and better working conditions. Nurses and other health care providers banded together as the Decent Work and Health Network to speak out on how low wages, lack of paid leave, and precarious employment lead to illness and disease. Faith leaders united with ethnic and local neighborhood groups to publicly share “stories of workplace exploitation that cried out for relief,” according to Rabbi Shalom Schachter.

The Workers Action Centre also built an army of grassroots activists through Feet on the Ground, a program that trained low-wage and part-time workers through a combination of classroom training, mentorships, and hands-on organizing. FOG activists spent one day every week organizing for the campaign in their own workplaces or communities. Because these organizers-in-training were recruited from immigrant communities, the movement crossed language and cultural barriers, reaching into working-class communities.

By early 2017, as the Liberal government was preparing to reveal its package of labor law reforms, the movement escalated its actions.

Backed by students, faculty, and other unions on the sprawling Toronto campus, the UNITE HERE Local 75 members—largely immigrants—connected their wage fight to their own daily battles against racism, sexism, Islamophobia, and rampant abuse by supervisors who would yell at workers, deny them prayer breaks, and try to pit workers against each other by ethnicity.

Food service worker Malka Paracha, a strike leader, had been overlooked for a promotion because she wears a hijab and was told by a supervisor that she wasn’t “presentable.” “They were treating us like animals—not just the Muslims, but all of the new immigrants,” she said.

“Before we didn’t know to fight back against any violation of human rights or discrimination,” she told graduate student union leader Alia Karim in an interview with the Canadian labor website rankandfile.ca.

York student leaders led campus marches, pressured the university president, and educated fellow students about strike issues while informing them about where they could eat without crossing picket lines. Workers got the message that they weren’t alone.

“With the help of student power we could fight back harder, 100 percent,” Paracha told Karim. “It was a learning period for us—to learn how to fight for our rights. Students were the encouragement.” In return, Karim reported, the workers’ energy motivated students and “developed us as young, new organizers.”

The York strike riveted public attention. After three weeks on the picket line, the UNITE HERE members won a new contract that brought their minimum pay to $15 within a year, guaranteed dental benefits for full-time and part-time workers, and improved union break rights.

In the ensuing weeks, University of Toronto food service workers also struck and won a $15 minimum wage, and workers at Rogers Centre stadium negotiated a $15 base rate.

The Liberal government saw workers and students on the march, backed by a growing interfaith movement. With next spring’s provincial elections surely in mind, in May the government rolled out its proposal for a $15 minimum wage and a raft of labor and employment law reforms.

Since the Liberals hold a governing majority in parliament, there was no doubt that the bill would eventually pass in some form. But the question during the next six months of parliamentary debate was whether business would erode its protections first. So the Fight for $15 and Fairness coalition mobilized for hearings and organized delegations to members of parliament.

By this time the $15 and Fairness coalition included many players, generating tensions over strategy. Campaign activists noted that many union and community leaders were more comfortable negotiating with government leaders than with stoking street heat.

In November Ontario’s provincial parliament passed the bill 67-26, with Liberals and NDP members voting in favor and Conservatives against. Besides the wage gains, the new law provides huge opportunities for unions to build power. The law extends card-check union recognition—meaning that employers must recognize a union if a majority of employees sign union cards—to janitors, homecare workers, and temp agency workers. Many workers will benefit from new job-security protections in case of “contract flipping”—when a company changes contractors—and from equal pay provisions for part-time and temporary workers.

Enforcement is key, and activists are already pivoting their organizing efforts to hold employers accountable. It’s yet to be seen whether unions will build on the upsurge in confidence to organize Ontario workers on a mass scale. Although the Ontario Federation of Labor and its union affiliates supported the Fight for $15 and Fairness, in general most unions did not play a central role.

Other new opportunities flow from the people and organizations who grew through this fight. “We invested in a lot of relationship-building and support and mentoring and energy into getting a lot of other, independent organizations off the ground,” Ladd said. “Part of the movement-building aspect of our work is always thinking about how you are developing people’s skills, their own organizations, their independence.”

The promising new activists who emerged include many students and young workers. “My generation has seen cuts upon cuts, so this is the first struggle where we’re not fighting cuts, but winning reforms,” said student leader Alia Karim. As a result of the Fight for $15 and Fairness, she said, “we see ourselves as workers and as agents who can effect change. It’s been even more exciting to see many people in $15 and Fairness transform into experienced organizers. And we’re going to fight like hell to win even more.”

Jonathan Rosenblum lives in South Seattle and is a member of UAW 1981/National Writers Union. He is the author of Beyond $15: Immigrant Workers, Faith Activists, and the Revival of the Labor Movement (Beacon Press, 2017). More about him can be found at www.jonathanrosenblum.org.