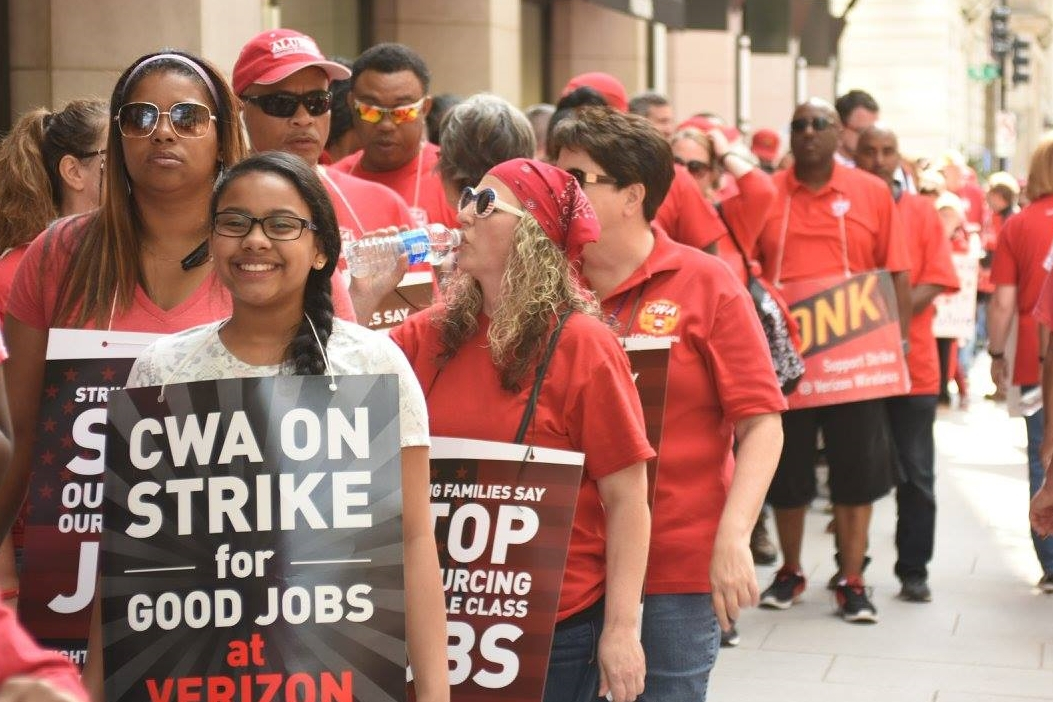 Some 39,000 Verizon strikers walked off the job April 13, beginning the largest U.S. strike in half a decade. Photo: CWA.

Three big wins for workers in the last nine months arrived where you might least expect them: in the old, blue-collar economy. That’s the economy where unions are down to 6.7 percent, where wins are rare and workers are supposed to be on their way out.

Yet at Chrysler, Verizon, and a huge Teamster pension fund, thousands of union members mobilized to put a stick in management’s eye. Hundreds of thousands will see the benefit.

Victory #1: Last September 40,000 Chrysler workers turned down a two-tier contract by a vote of nearly 2 to 1. Despite earlier promises to bring a big chunk of Tier 2 workers up to Tier 1 wages, United Auto Workers bargainers had agreed to let the hated two-tier system continue indefinitely.

By that time Tier 2 represented 45 percent of the workforce, and UAW President Dennis Williams told local union officials, “Ending two-tier is bullshit.” But the vote forced union bargainers to return to the table and negotiate a path to standard wages for all Tier 2 members.

Victory #2: In May, retired Teamsters in 25 states saw the fruits of two years of organizing when the federal government rejected the Central States Pension Fund’s plan to slash benefits for current retirees by 50 to 60 percent. More than 400,000 Teamsters, retirees, and their families were granted a reprieve.

And Victory #3: On June 1, 39,000 Verizon workers ended a 45-day strike that forced the predatory company to back down from outsourcing call center jobs, forcing transfers to other states, and harassing and micromanaging technicians. The company raised wages and pensions and its execs were left scratching their heads, wondering what went wrong with their overreach.

What did go wrong with corporate plans to extract even more concessions? What enabled our side to kick some ass this year?

The three cases share one common characteristic: grassroots action by tens of thousands of rank-and-file members. Not clever PR campaigns, not pounding the bargaining table or lobbying, not photo ops, but getting in someone’s face, in numbers.

In each case, the wins were partial. The Chrysler contract includes ugly pitfalls, including more use of temps. The Teamster pension fund’s shortfalls are still there and need a federal bailout—a tall order. Verizon workers gave up a lot on health care costs.

Still, these workers can be proud of what they blocked and what they won—in two cases against the wishes of their national unions.

HOW’D THEY DO IT?

Let’s look at the factors that go into winning a labor fight:

These factors varied. At Chrysler and Verizon, the companies were making money and did not need concessions—a fact that certainly helped union bargainers. The Central States Pension Fund, on the other hand, is in serious financial trouble, owing to the 2008 economic crisis and the union’s decision to let giant UPS leave the fund.

What about union unity? In the UAW and the Teamsters, the rank and filers and retirees were defying their national unions. Teamster brass initially supported the pension cuts. They were dragged kicking and screaming to weigh in rhetorically on the workers’ side.

At Verizon, in contrast, the fight was organized by union leaders, including several Communications Workers (CWA) locals led by reformers. Clearly, the unions’ resources, from staff time to strike pay, made an enormous difference in rank and filers’ ability to wage a fight.

As to leverage: Teamster retirees had no leverage with their companies, since they had no labor to withhold. Their only sway over union officials was to make them look bad to active members who could still vote. (Top Teamster officers are elected by the rank and file.) They had to make their case to a single appointed government official, who had the power to push the cuts forward or turn them down.

Chrysler workers would have had leverage galore if leaders had been willing to strike—the company was pumping out vehicles and profits—but leaders were not willing. Workers had only the right to an informed vote, which had been established in previous rounds of negotiations by legions of other protesters.

Verizon workers had power against their immensely profitable employer and used it well. The company was not able to keep up the work with untrained scabs.

What the three fights had in common was a big mismatch between what workers had been promised—a secure pension, a decent wage, a lifelong career with survivable working conditions—and what they were now told was all they could get. Righteous indignation was a potent motivator—plus, for the Teamsters, fear of abject poverty.

At Verizon, where virtually all strikers had 15 years’ seniority and up, workers resented the company’s greed and its push to get rid of an experienced workforce. One Manhattan field tech said, “They’re saying, ‘You’re not worth what you were worth last contract.’”

Workers in all three fights turned out big numbers for whatever they did.

At Chrysler, that meant mobilizing quickly for a “no” vote. Fired-up rank and filers, many of them new to organizing, generated tactics, confidence, and excitement through Facebook discussion groups.

Members showed up at contract information meetings and badgered the officials sent to sell the deal. They made “No More Tiers” T-shirts and wore them into the plants. A few dozen workers who happen to work near the UAW’s International headquarters even held a vote-no rally there.

Workers studied the 456-page proposal and found concessions not mentioned in the union’s cheery “highlights” brochure. They publicized those to win big “no” votes among those destined for a new Tier 3.

When he and his four friends got home, he said, “we formed our committee, put the word out, went to the retiree clubs, and we had another meeting that was over 150 people—and it just started building from there.”

Mass meetings of 300, 500, 800, 1,200 were held from Milwaukee to Kansas City. At some, the government’s “Special Master” got an earful about what the cuts would mean. Helping the work were Teamsters for a Democratic Union and the Pension Rights Center.

In April 2,000 from 20 states rallied in Washington. A Houston local sent a busload of retirees and their spouses 1,400 miles to attend. “There were people there with walkers, with canes, with oxygen bottles,” said North Carolina retiree Brad Colesworthy. “You have never seen such emotion, such brotherhood and togetherness.”

Verizon workers, too, turned out in big numbers: 500 and 800 greeted the CEO and CFO, respectively, when they appeared at conferences. The “Good Morning America” show hosted 250 strikers in their red T-shirts. Others were greeted as heroes at a Bernie Sanders rally.

But the strikers also did the traditional thing a strike is supposed to do—stop work from getting done. Hurt profits.

Many strikes these days are “publicity strikes”—one day on the picket line. But the phone workers put up roving pickets: they harassed scabs and managers to make it hard or impossible for them to install and repair (which they were no good at in any case).

When Verizon boarded scabs at hotels that it used as dispatch centers, strikers organized wee-hours “wake-up calls” outside. To build solidarity and publicity, locals recruited other unions and community groups to adopt Verizon retail stores to picket.

Meanwhile CWA members, though not their fellow strikers in the Electrical Workers (IBEW), had a strike fund behind them, with benefits of $200-$300 a week and a promise to pay medical bills once the company cut off insurance.

As the strike wore on, analysts predicted hundreds of millions of dollars in lost profits. Verizon caved.

Most of the publicity unions get these days says existing members are dinosaurs, concessions are inevitable, and the labor movement is on its way out. Some say our best hope is to focus on those who barely have anything yet—fast-food workers and Uber drivers—though it’s not clear why they’d want to hop onto a sinking ship.

But these three battles show the raw material is still there for big fights led by labor’s traditional members. Too often, union leaders squander it. Or ignore it.

Still, the righteous indignation flares up when the bosses come after what took generations to win—the anger and the willingness to act on your own behalf.

Unions should use this power. That’s how you build the kind of movement that can inspire more workers to join.

Jane Slaughter is co-author of Secrets of a Successful Organizer. Alexandra Bradbury and Dan DiMaggio contributed reporting to this article.

A version of this article appeared in Labor Notes #448, July 2016. Don't miss an issue, subscribe today.
Jane Slaughter is a former editor of Labor Notes and co-author of Secrets of a Successful Organizer.
Related
At a Convention Like No Other, Teamster Challengers Turn a Corner »
Employers Are Using the Crisis to Push Concessions They Don't Need »
New Jersey Welfare Workers Sound the Alarm on Safety »
No One Else Was Going To, So These Teamsters Saved Their Own Pensions »
In a Six-Day Strike, Bronx Produce Workers Doubled Their Raise and Inspired New York »