Workers Walk Out for $15 at Dozens of Quebec Nursing Homes 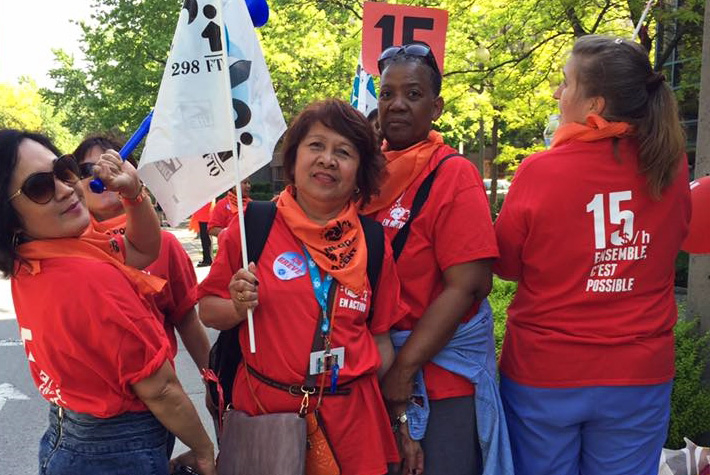 Conchita Poonin and her co-workers strike for a $15 starting salary. Thousands of Quebec nursing home workers have walked off the job in their first-ever series of coordinated strikes. Photo: Immigrant Workers Centre

Thousands of Quebec nursing home workers have walked off the job in their first-ever series of coordinated strikes. They’re demanding that all workers get a starting hourly wage of $15.

The 3,000 workers in 32 nursing and retirement homes for the elderly had three days of strikes under their belts already by June 21, when they began an open-ended period of strikes.

For legal reasons, they’re taking an unusual rotating approach—with each worker walking out for 45 minutes of each workday.

Nurse aide Conchita Poonin is the union secretary-treasurer for her workplace, the Château Westmount retirement home in Montreal. She’s been leading the strikes there.

Residents of the home pay between $4,000 and $7,000 each month. “We find it hard to believe the employer is not making enough money,” Poonin says.

The $15 demand has mobilized her co-workers, from maintenance workers to housekeepers. “Everyone is really united to fight for this,” she says, “because mostly they are making the same salary I am receiving.”

“What bothers me the most in these workplaces is that it’s always women working with the poor salary,” says Cynthia Cadeau, a maintenance worker and union president at Château Westmount. “We do so much and it’s not recognized.”

Cadeau estimates that women make up 90 percent of her co-workers. She says often when men find out the salary, “they don’t come back.”

“The employers need to know that the cost of living is high,” says licensed practical nurse Anne-Marie Wilson, union president at the Waldorf retirement home. “You earn $11.70, how are you going to manage?”

Still, some employers are balking at the $15 demand. “They believe some of the employees are not entitled to $15,” Wilson says. “You can’t be sitting at the table and telling me that some people don’t deserve it. Everybody deserves to earn a decent living wage. It’s not for one, it’s for everyone.”

HAD TO GET CREATIVE

In Quebec, nursing home and other health care workers are considered to provide an essential service. That means in any strike, they’re legally required to provide 90 percent service to residents.

So the union has to be imaginative, says Danielle Legault, vice-president of the Quebec Service Employees (Syndicat Québécois des Employées et Employés de Service, SQEES) Local 298. “We have to find methods that are going to disrupt the workplace, but are not going to affect services to the client.”

Since 2012, the union has been trying to coordinate bargaining across all the nursing homes it represents—a challenge when even employers who run multiple homes want to bargain with each unit separately.

“One establishment alone does not really have an impact,” says Legault. “If we wanted to have a little more power, the first thing we had to do is bring the collective agreements to finish at the same time.”

With bargaining finally lined up this year, on May 11 the union launched its first day of strikes. Workers walked off the job in 38 nursing homes.

To meet the 90 percent service requirement, the workers strike for 45 minutes of each eight-hour shift. They rotate, maintaining a picket line from 7 a.m. to 10 p.m.

After the first strike day, the union gave the employers time to come to the table. When there was no movement, the union escalated. “We told them ‘It’s going to be a two-day strike, so move yourselves. We are willing to sit down and negotiate,’” says Legault.

The impact started to show after the two-day strikes, when a few employers settled or re-started negotiations.

The union gave notice to the holdout employers of the open-ended strike—still in 45-minute rotations, but this time with no end date. SQEES is pledging to continue until all nursing homes agree to the $15 demand.

Poonin says residents in her retirement home support the strikes. “The families didn’t know we are receiving that kind of salary,” she says. “They thought we are making $18, $20 per hour.”

At Wilson’s facility too, family members are on board. “They are saying, ‘We need you guys to be taken care of properly, because you are taking care of our families,’” says Wilson.

Bolstering the campaign is the growing Fight for $15 movement. The Immigrant Workers Centre and the Quebec Federation of Labor (La Fédération des Travailleurs et Travailleuses du Québec) recently launched a campaign for a province-wide $15 minimum. Such campaigns are underway in seven of Canada’s 10 provinces.

Workers at the Old Port of Montreal, a popular tourist destination, began a strike May 27, calling for a $15 entry-level wage.

“The success in the States of the Fight for $15 is really shining everywhere,” says Legault.

Since health care job actions are so restricted legally, the public campaign is critical. Negative publicity, Wilson says, is the last thing the companies running these upscale retirement homes want. “That’s why I said, ‘Now is the time. We will go to the media and we will explain what we are doing.’”

“They take care of our grandparents, our parents, our aunts,” says Legault. “In Quebec, when it gets to the elders, people are very sensitive.”

How do you keep a daily 45-minute strike humming?

Poonin is in charge of coordinating the schedule at her workplace and making sure her co-workers come out on time. When workers hesitate, she encourages them.

“I say, ‘We have to be united and we have to fight for our demand,’” she says. “‘If you will be scared of them, they will do whatever they want to do.’”

Even though workers can only strike for 10 percent of the workday, the strike schedule is coordinated for maximum impact. “That’s where we have a little bit of power,” Legault says. “We’ve evaluated where it’s going to hurt the most, and the work that’s going to be left—you won’t be able to do the dishes or clean the floors—as long as it’s safe.”

Management has reacted by trying to intimidate the strikers—blaming them for work that’s not finished, and even writing up disciplinary letters. “But we are on a legal strike,” says Legault. “This is the only way we have to make our voices heard.”

To counter management’s tactics, union activists have to encourage their co-workers to be sure they leave promptly when their strike shifts start—regardless of what task they might be doing.

On the picket line outside, members make as much noise as possible, banging pots and blowing whistles and trumpets. In many of the retirement homes, this is the first time workers have struck.

Some of the neighbors, in the wealthy Montreal suburb that surrounds Château Westmount, have not been impressed. “But this is a strike—we will not be just looking at each other,” says Poonin, who lost her voice leading chants.

When residents complain, workers send them in to talk to management. “I don’t think they are going to put up with this turmoil on a daily basis,” says Cadeau.

At Wilson’s workplace, management had to pitch in to get the work done: “They complained about it, that it is too much work, and at the end of the day they were very tired.” She believes the pressure will continue to mount. “I hope that with this unlimited strike we will break them and they will say, ‘Okay, guys, here’s the $15.’”

Wilson sees a shift in how members are connecting to the union, too. At her retirement home, members have been wearing the campaign’s red shirts every day since May, and grew eager for the big strike to start. A week ahead, she said, “They are asking, ‘When are we going to go outside? I’m ready.’”

Sonia Singh is a staff writer and organizer with Labor Notes.sonia@labornotes.org
Related
General Strike Threat Beats Ontario's Anti-Worker Law »
Kaiser Strikers Insist You Should Be Able to Get an Appointment When You Need It »
Nine For-Profit Nursing Homes Pull A Simultaneous Strike—And Another Is on the Way »
Kaiser Clinicians Strike against ‘Separate and Unequal’ Mental Health Care »
International Students in Ontario Are Fighting Wage Theft—And Winning »