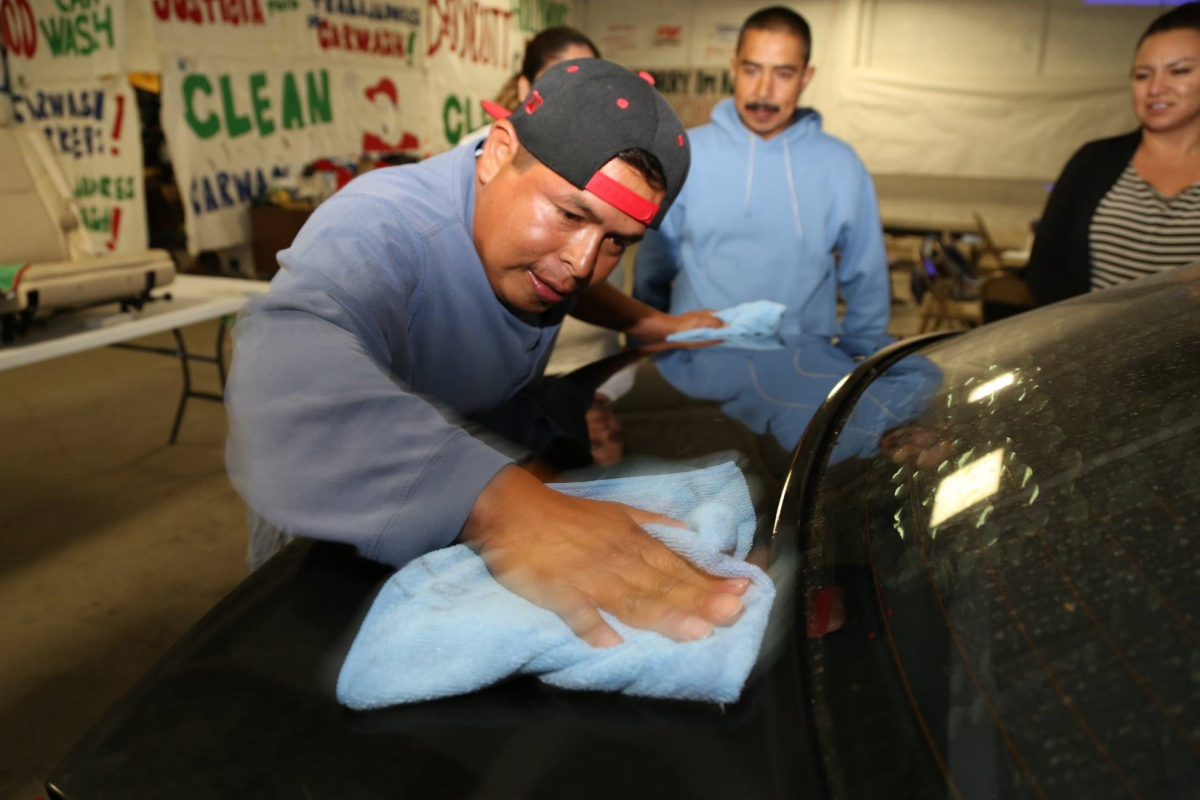 In Juan Hernandez’s first car wash job, he and his co-workers used to put in nine-hour days for $40 in cash. Workers would often arrive at 8 a.m.—but have to wait three or four hours to start working, with no fixed schedule.

“When I began to work in this industry, there was practically no control over car wash owners,” Hernandez said. “Not knowing the labor law, you are just giving away your work for free.”

But through a collaboration between worker centers and unions, car wash workers in Los Angeles are teaming up and transforming their industry.

A coalition that includes community groups, the AFL-CIO, and Steelworkers Local 675 backs the CLEAN Carwash Campaign, launched in 2007. The campaign uses a range of strategies—from picketing the worst wage thieves to helping workers unionize.

Today, out of 500 car washes in the L.A. County area that have employees, 30 are union.

Organizing is a challenge in an industry with few chain employers and just 15 workers in the average workplace. Car wash workers do jobs like shampooing, vacuuming, waxing, and detailing. Even fully automated car washes usually have one or two workers doing specialized tasks.

The campaign won its first union contract in 2010. But a surge of organizing followed changes to the Car Wash Worker Law that took effect in 2014.

California car washes must register with the Department of Labor Standards Enforcement and post a bond of $150,000. Car washes with union contracts are exempt from paying the bond—which gives companies an incentive to agree to a union. (A similar law passed in New York City last year, but implementation is on hold).

A common framework agreement covers all the unionized shops, establishing health and safety protections and setting wages 30 cents above the minimum wage, which is $10 an hour in L.A., with parts of the county going up to $10.50 in July.

Because there had been so much wage theft in the industry, the first contract brought some workers up from $4 to $10.30, said Campaign Manager Justin McBride. Complaints of wage theft still occur in union shops, but now there are grievance procedures to quickly address it.

Union workers also negotiate side letters spelling out changes specific to each workplace. For instance, some have won a microwave, a place to eat lunch, a time clock to ensure hours are fairly captured, or caps to protect workers from the sun.

But many car wash workers, including some of the most active leaders, are not formal members of the Steelworkers or covered by collective bargaining agreements.

In car washes where they haven’t yet built enough support to win a union election, workers improve conditions by other tactics, including direct action. They get help from the Carwash Worker Center, formed two years ago.

In a workplace of 32, Hernandez got 24 co-workers together for a meeting to discuss their rights. They decided to approach the manager as a group about their irregular hours and payment.

The owner retaliated by firing eight, including Hernandez. The workers immediately filed unfair labor practice charges at the Labor Board, but also stepped up community pressure, organizing a picket outside the car wash. After 17 days, they were back at work.

“We continued to fight and we were able to achieve many changes,” Hernandez said. “We got paid for the extra hours we worked, they gave us 30 minutes for lunch, we won a 10-minute break every four hours, and we won that everyone get paid by check.

“But more than anything, the treatment is the biggest change,” said Hernandez, who still works at the same car wash. “The manager treats us very differently than before.”

Hernandez and his co-workers also tried to organize a union, but because of the slick anti-union consultant their employer brought in, they couldn’t win enough support.

In another car wash, community allies joined workers to deliver a letter demanding that their boss provide drinking water and eliminate waiting time in the mornings.

The pressure worked. The next day the employer began supplying water and changed the schedule so workers weren’t waiting.

Next, the workers decided to push for a restroom, with another community delegation. They won that too. “The more they did, they saw they had power to push things and balance things in the workplace,” said Flor Rodriguez, coordinator of the Carwash Worker Center.

To celebrate a year of organizing, the workers brought in a cake with the logo of the CLEAN Carwash Campaign and invited the manager and owner to join them for a slice. “They wanted to make sure it was known this is something that wasn’t going to die down, but was going to keep going,” Rodriguez said.

If employers stop responding to workers’ demands, the campaign will announce a boycott. Depending on the employer’s response, the boycott can be as short as a few days, or in one case, as long as three years.

“If we put up a picket line, we can generally turn away half of the customers,” said McBride. “It’s another key side to driving up standards—putting pressure on the worst shops.”

The worker center gives union and non-union workers a space to connect. At general meetings five times a year, workers tell their stories and strategize.

“Everyone has experienced wage theft at some point. That’s just the way the industry is shaped,” said Rodriguez. “[Sharing experiences] builds that system of support.”

Hernandez sits on the worker center committee, which meets twice a month to plan. “Based on workers’ testimonies in the general meeting, we decide how we will take action,” he said.

Some committee members are in union shops, and others aren’t. The point is to change the whole industry—something Hernandez can already see happening.

“Little by little, there have been many car washes that have implemented changes,” he said. “Now workers feel more protected.”

The committee has also developed a peer training program, where workers teach one another to do detail work, like buffing. Having these skills can help workers get higher wages and more regular hours, since a car wash needs at least one worker onsite at all times who can do detailing.

But these are skills that workers often can’t learn on the job, because employers—worried about time or liability for damage—don’t let them shadow other skilled workers. In the program, workers practice on cars loaned by community allies.

These trainings are a way to reach out to workers in all kinds of car washes, both union and non-union, Rodriguez said. Because trainers spend so much time with the workers they’re training, they end up identifying potential leaders.

Non-union car wash workers will have the chance to weigh in too. That’s important, because the categories of union and non-union worker aren’t fixed.

Turnover is high. A unionized car wash could close, or workers could move between jobs. “You may be a [union] member today and not tomorrow,” said McBride.

Besides, “it’s important to have both perspectives,” Rodriguez said, “so [non-union] workers can learn what the contract is, and together they can fight for more.”

This worker center-union collaboration shows the value of experimenting with a variety of strategies. “One of the hardest things for labor partners is that it can’t always be about collective bargaining,” said McBride.

“It’s about worker power. If we’ve learned anything from the worker center movement, it’s that power can look like a lot of different things.”

Some quotes in this story have been translated from Spanish.

A version of this article appeared in Labor Notes #446, May 2016. Don't miss an issue, subscribe today.

Sonia Singh is a staff writer and organizer with Labor Notes.sonia@labornotes.org
Related
Employers Are Using the Crisis to Push Concessions They Don't Need »
Striking ATI Steelworkers Hold the Line for Premium-Free Health Insurance »
Los Deliveristas Speak: How Delivery Workers Are Organizing to Take On the Apps »
Can a Driver Uprising Make Food Apps Deliver? »
Interview: If Only Unions Had Managed to Organize the South, Could Trump Have Been Avoided? »