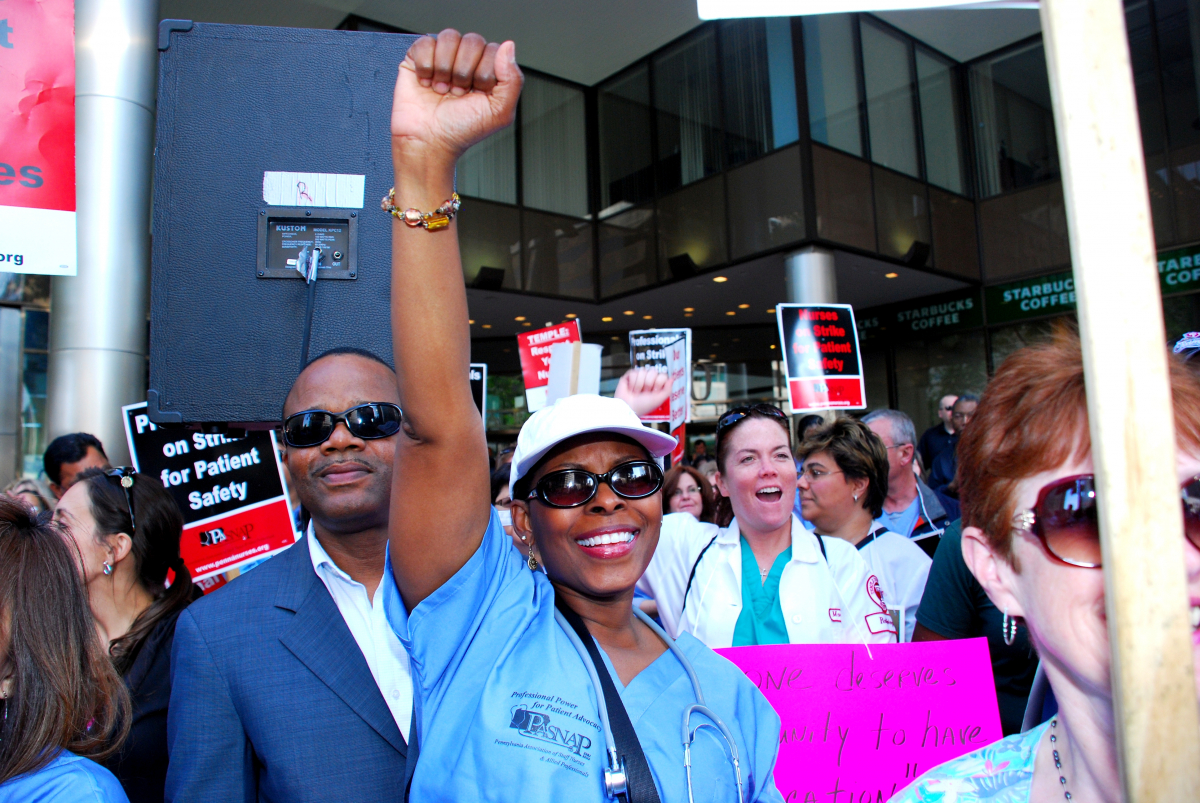 This union has grown by 40 percent in a matter of weeks—and the wins keep coming. What's going on? Photo: PASNAP

A few days before Christmas, it was clear something special was going on.

Victorious elections followed the filings in a matter of weeks. When the difficult work of bargaining first contracts is concluded, the 5,200-member union is looking at adding nearly 2,000 new members—an almost 40 percent growth rate in a very short period.

As Labor Notes goes to press, 100 technical employees at Delaware County Memorial will vote to join the union; another 1,000 registered nurses at Einstein Medical Center are getting ready to file their own petition.

What’s going on? First of all, these organizing victories did not come about through “card check” campaigns or “election procedure agreements” where the employer agrees not to fight the union—usually in exchange for the union agreeing not to say bad things about the company or, in some cases, in exchange for favorable contract terms later.

“Some unions have been able to grow their numbers through these election procedure agreements,” said PASNAP Executive Director Bill Cruice. “While we don’t judge these agreements negatively, we’re not comfortable with the price that often must be paid for so-called employer neutrality.

“When the union has to get employer approval for their communications with employees, there’s a strong risk that the vital relationship of transparency and trust with the workers can be distorted or broken even before it has a chance to develop.”

Instead, the organizing wins were made possible by a combination of conditions:

PASNAP’s first experience with the new election rules came late last summer. After filing a showing of interest, the nurses and technical employees at Eagleville Hospital waited just three weeks before voting to join the union.

In the past, employers could delay a vote by raising a variety of often frivolous objections. Now the Labor Board deals with objections after the election.

The shrunken timeline gives workers an opportunity to vote with less coercion and pressure—simply because there’s less time for employers to campaign against unionization.

Still, all these employers made aggressive efforts. They held group and indidivual meetings to send nurses the message that if they voted for a union, they would lose their flexibility and current standards.

Despite this opposition, nurses and techs at Eagleville won their union by an impressive margin of 90 percent; at the Tenet Healthcare-owned Hahnemann University Hospital by 81 percent; and at St. Christopher’s Hospital for Children by 86 percent.

Several other factors help explain PASNAP’s success. Since its founding in 2000 with assistance from the California Nurses Association, the union has developed an unusually strong internal organization.

Although PASNAP doesn’t represent a majority of nurses in Pennsylvania, it makes a considerable effort to build leverage in each contract campaign. From creative and strategic use of employers’ Unfair Labor Practices to aggressively helping nurses find second, per-diem jobs in advance of strike deadlines, the union works to confront employers from the strongest possible position.

“We’ve led several effective strikes, including an action by 1,500 members at Temple University Hospital in 2010,” said Eakin, “a strike with 95 percent participation in the teeth of the Great Recession that beat back several concessionary demands, including the infamous ‘gag clause,’ which sought to silence nurses from speaking out about patient care conditions.”

In a five-day strike at Crozer Chester Medical Center in 2014, an inspiring 100 percent of the 600 nurses participated.

Another important factor in the recent upsurge in organizing for this union is the involvement of the Northeast Nurses Association.

Besides PASNAP, the other members are the 23,000-member Massachusetts Nurses Association and the 1,200-member New York Professional Nurses Union.

NENA isn’t a typical labor coalition. With no buildings or overhead, it’s more organizing cooperative than traditional alliance or federation.

Even unions that prioritize resources for new organizing can be overwhelmed by the size of potential targets, and by the swiftness and reach of employer counterattacks. So NENA’s early organizing support played a vital role in the wave of successes.

It ensured that the union had enough organizing staff to reach every hospital unit, so that no group of nurses was left more vulnerable to employer misinformation.

In addition to early organizing support and making it possible for nurses to connect more quickly, NENA pushed for the use of electronic authorization cards.

In late October, just as the organizing drive at Hahnemann was taking off, the Labor Board released a guidance memo outlining this new option: workers can petition for an election using electronic cards instead of the traditional paper ones.

The electronic card was available as a simple form on the PASNAP website, allowing workers to text each other the link to the card, email it, and post it on Facebook pages and other social media.

This method gave an additional advantage to an already stealthy campaign by cutting out the process of distributing and collecting paper cards. Since the link was freely distributable, workers could use their natural social networks to quickly generate a showing of interest in the union.

While the speed of electronic cards and the three-week timeline gave nurses an edge against their employers, this rate of unionization wouldn’t be happening without the biggest factors—dangerous understaffing, scarce supplies, and substandard wages and benefits in the area.

Transformative social movement opportunities don’t come around very often. It’s possible that the nurse labor movement in Pennsylvania is experiencing such a moment.

The nurses’ relationships with their employers have hit a tipping point. Wages, health and pension benefits, staffing, and supplies are treated with unrelenting austerity, while hospital executives are showered with millions and even more is spent on mergers, acquisitions, and related marketing.

At Hahnemann, the contradictions of the “magnet status” bestowed on Tenet—where registered nurses are promised a voice and empowerment through management-dominated committees—might have sped the way.

Selina Greene, an orthopedic neurology nurse at Hahnemann, explained why she came to support the union: “Our voices weren’t heard. Management was saying we don’t have to have a union to have input and make changes; we can do it through ‘shared governance.’

“Well, I was on the Quality Assurance Committee for two years, and all we did was sit around and talk. We didn’t get anything done. We need real bargaining, a real voice that we can only have through a union.”

What’s next? Instead of playing musical chairs among hospitals in hopes of finding better working conditions, Philadelphia-area nurses are ready to raise standards throughout the city.

Nela Hadzic is the regional organizing director of the Northeast Nurses Association.

A version of this article appeared in Labor Notes #444, March 2014. Don't miss an issue, subscribe today.
Related
After Strike Threat, Wisconsin Nurses Get a Possible Path to Union Recognition »
Wisconsin Nurses Set to Strike, As Employer Claims It's Banned from Bargaining »
Stung by Ascension's Union-Busting, Michigan Nurses Gird for Contract Battle »
A Nurse’s Story: My True Cost of the Pandemic »
Labor Must Rise Against Vaccine Apartheid »

That is so darn smart.

Let's hear it for the nurses!