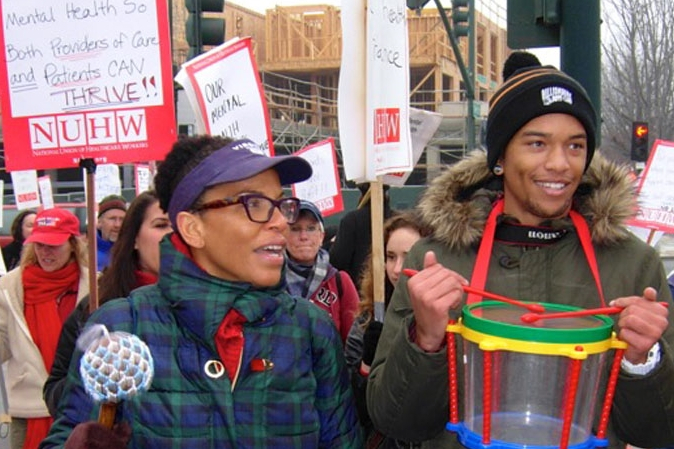 NUHW has fought for this contract ever since breaking away from SEIU five years ago. The win proves the underdogs were right: givebacks at Kaiser could be beaten. Photo: NUHW

After five years and several strikes, Kaiser Permanente mental health clinicians have won a contract that benefits not only our patients, but our fellow Kaiser workers in 30 other unions too.

We scored serious wins on our three central issues: staffing, wages, and pensions.

For patients suffering from depression or post-traumatic stress disorder, delays can be insurmountable obstacles, with harmful effects. Some have committed suicide. Twice in two years, Kaiser has been cited by the California Department of Managed Health Care for “serious” and “systemic” violations—yet the waits persist.

We sounded the alarm internally for years, then took our case to regulators and the public by filing a formal complaint. After a 15-month investigation, the state levied a $4 million fine and imposed a cease-and-desist order on Kaiser. Meanwhile, patients filed five class-action lawsuits over delayed care.

Our weeklong, statewide strike in January drew national and even international attention, helping spark a discussion on mental health parity—the idea that we should take mental health as seriously as physical health.

Our tentative agreement includes an unprecedented scheduling ratio—one new-patient appointment per four returning-patient appointments—that will allow us to see returning patients more frequently. Kaiser will be required to hire more clinicians if it can’t meet the ratio for three months.

Clinicians will be free to continue our patient advocacy efforts; the agreement gives us access to binding arbitration for unjust disciplines and terminations. We still have a long way to go to achieve mental health parity at Kaiser—and in the country as a whole—but this agreement is a good first step.

On the pension, we were the first union to face Kaiser’s demand for a massive concession—and we defeated it.

When we began negotiations five years ago, Kaiser proposed to eliminate our defined-benefit pension and put us—and soon, all 100,000 of its unionized workers—into a 401(k) plan.

Our strikes forced Kaiser to dial back its proposal from completely eliminating the pension to two-tiering it. Then we fought two-tier.

Last month, Kaiser announced it was unilaterally implementing two-tier, forcing newly hired clinicians into the cheaper 401(k) plan. But just hours before we were set to launch an open-ended strike, Kaiser backpedaled again and withdrew two-tier. All our future co-workers will receive the same defined-benefit pension we’ve had for years.

Our struggle hasn’t been easy. We’ve worked for five years without a contract, hand-collecting union dues. We went several years without raises. We’ve waged statewide strikes. We’ve been < a href=http://labornotes.org/blogs/2013/04/kaiser-adds-staff-after-mental-health-workers-expose-long-patient-waits>whistleblowers. We’ve traveled the country to tell our story.

Our worksite leaders have faced harassment, retaliation, and attacks from management. We’ve also had to battle the leaders of Kaiser’s “partnership” unions, who were ready to accept the elimination of the defined-benefit pension—though thanks to us, they kept it—and who teamed up with management to try to break our strikes. And that’s just the beginning of the list.

In the end, we were successful because our members simply wouldn’t give up. The lesson: even a relatively small group of workers can prevail against a multi-billion-dollar corporation if we are determined, well-organized, have a plan, and are ready to fight.

A version of this article appeared in Labor Notes # 441, December 2015. Don't miss an issue, subscribe today.
Related
Kaiser Strikers Insist You Should Be Able to Get an Appointment When You Need It »
Kaiser Clinicians Strike against ‘Separate and Unequal’ Mental Health Care »
A Nurse’s Story: My True Cost of the Pandemic »
Striking Massachusetts Nurses Outwait Corporate Giant Tenet »
Washington Mental Health Workers Win Safety Strike »