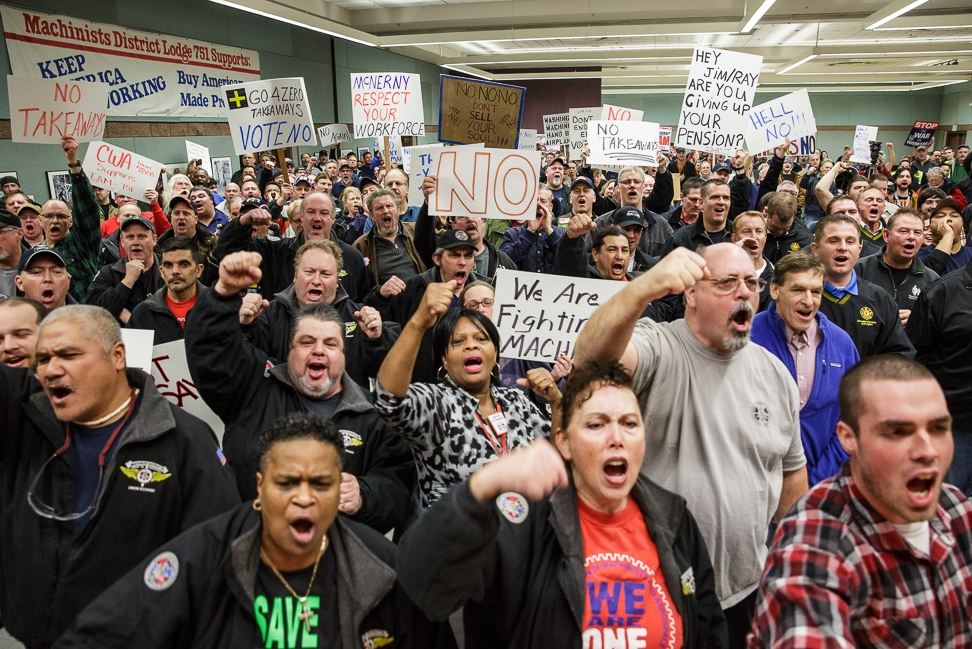 Boeing Machinists rallied in 2013 against the phase-out of their defined-benefit pensions. The company pushed the mid-contract deal on members in two votes, narrowly winning approval the second time. Photo: Jim Levitt.

This is a cautionary tale of unintended consequences.

The 33,000 members of Machinists District Lodge 751, in the Seattle region, were battle-hardened. They had struck the Boeing Company four times between 1989 and 2008. During that period, because of members’ strength and solidarity, wages kept pace with the cost of living and the union more than doubled the pension benefit.

But after the 2008 strike, which was settled by a four-year contract agreement, Boeing made plans to develop a second final assembly line for its newest airplane, the 787—and to use its choice of location as leverage against the union.

Boeing announced in late 2009 that it would, for the very first time, build a final assembly line for a jetliner outside Washington state. The company would locate the line in South Carolina, a “right-to-work” state.

Company executives made it clear that the unionized workforce’s tendency to strike was the reason for Boeing’s departure from its traditional home for final assembly.

The Machinists filed an unfair labor practice charge, claiming that Boeing was retaliating against its unionized workers for engaging in a protected activity, specifically for striking. The National Labor Relations Board found merit in the ULP and scheduled a trial for late 2011. The union was prepared and confident going in.

Just a few weeks prior to the start of the trial—and with nearly a year left in the contract—the company approached the union to suggest an early opening of the 2008-2012 collective bargaining agreement.

The company’s extension offer included guarantees for final assembly in Washington of the next new airplane, the 737 MAX. Its stated goal was to secure continuity of production without the possibility of a strike.

Boeing would get eight years of continuous production without a work stoppage (2008-2016). The union would get improvements in the pension and wage increases, as well as securing thousands of jobs for years—or so we thought.

Since the 2008-2012 collective bargaining agreement was still in force, members had only two options. They could accept the proposed extension with its terms and conditions, or they could reject the extension offer and continue to work under the existing contract. There could be no strike, because the contract had not expired.

But what our union might not have fully appreciated was the leverage afforded us by the pending ULP trial. This is why the proposed extension offer was so rich. We also did not know the dangerous precedent we created by opening up the contract early. We would soon find out what that could mean.

However, given all the improvements and jobs guaranteed, members overwhelming approved the extension proposal.

Less than two years later, in 2013—with nearly three years remaining on this extension—the company came back, demanding that the contract be reopened again. It was planning to bring another new airplane to market, the 777X.

This time, instead of offering contract improvements to induce members to agree to an extension, Boeing was threatening to move the airplane’s production out of state—and this time, we had neither a ULP nor the ability to strike to use as leverage.

Adding insult to injury, it even proposed removing the work-placement language for the U.S. Air Force air refueling tanker, a $35 billion defense contract that our union had worked on, in partnership with the company, for over a decade.

However, during the Christmas holidays—under threat of job loss and tremendous pressure from the local media, state politicians, and community leaders—members were forced to vote on a slightly improved offer.

This offer still included elimination of the pension and a huge cost shift in the health care plan. The vote was scheduled over the holiday, when more than 8,000 members could not or did not vote.

Out of 33,000 members, that proposal passed by a margin of just 300 votes. A mere 37 percent of the membership voted for a proposal that would lock in the terms of the contract for another 10 years.

Not a single political leader stood up with Machinists Union members. Politicians who had been supported by our members for years either stood by silently or actually encouraged the vote that devastated our benefits and strength.

Community leaders with whom the Machinists had worked relentlessly over the years, building training programs and support for public policies that supported a strong aerospace industry, turned their backs on the membership. The press piled on too.

We learned a very expensive lesson about opening a contract without the ability to withhold our labor. It will take years to gain back what was lost. It will take at least another nine years before we will even get a chance.