‘Teach for America’ Teachers Can Join the Union 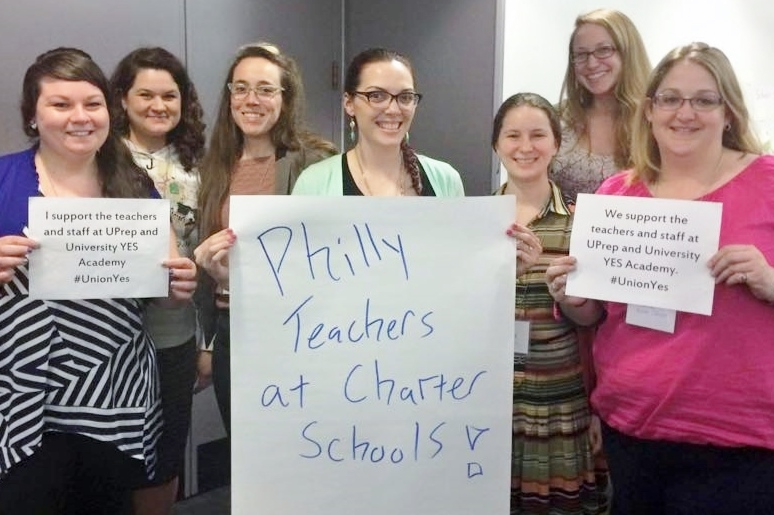 In a good sign for teacher union drives around the country, a Labor Board hearing officer opted to include Teach for America teachers in the union vote at a Detroit charter school chain. Charter teachers in other cities sent messages of solidarity. Photo: Michigan Alliance of Charter Teachers and Staff (AFT).

A National Labor Relations Board hearing officer has ruled that Teach for America teachers should be included in the union at a Detroit charter school chain.

Teachers at University Prep charter schools voted May 14 on whether to unionize. UPrep relies on TFA teachers to fill about 10 percent of its classrooms, a figure that’s similar to urban charter schools in other cities.

But when some TFA teachers emerged as leaders in the union drive, Detroit 90/90, the company that manages UPrep, challenged their right to vote.

In a June hearing, the company argued that TFA teachers’ minimum two-year commitment to the school made us “temporary service workers” rather than “professional employees”—more like long-term substitutes than permanent teachers.

“It was such an obvious attempt to divide and conquer,” said Alex Moore, a Teach for America teacher and unabashed union supporter. “[The company] loved us when we were cheap, docile workers, but when we spoke up and organized, they wanted to sweep us under the rug.”

The hearing officer found on July 31 that TFA teachers are indeed professional employees—and thus have the right to be part of the teachers’ bargaining unit.

The ruling noted that TFA teachers share the same job responsibilities, evaluations, and contracts as other teachers in the district. Our minimum two-year commitment is irrelevant, given that the employer offers only one-year commitments to all its teachers.

The decision doesn’t formally set a legal precedent for other schools. Still, it’s a good sign for union drives across the country. Charter teachers are organizing in such cities as Philadelphia and Los Angeles—often in schools with sizable TFA contingents.

UPrep is the largest charter school district in Michigan. It consists of seven schools, 200 teachers, and more than 3,000 students. Teachers there began organizing in spring 2014.

Charter schools, which have grown rapidly in Detroit, are publicly funded, privately managed, and largely non-union.

Like charter school teachers across the country, UPrep teachers work under at-will contracts—meaning they can be fired at any time, without explanation—that are renewed every year. So they don’t know until June whether or not they’ll have a job in August.

This perpetual uncertainty, along with stolen wages and a lack of support from administrators, led teachers to reach out to American Federation of Teachers (AFT) organizers in Michigan.

“It’s hard to imagine a career for yourself in a school district when you could be fired at any time at the whim of an administrator,” said Jasmine Singleton, who taught first grade at UPrep during the campaign. “We need some stability in our work as educators, so we can focus on the children.”

Unfortunately, the union lost the election at UPrep by a few votes. Since long-term substitute teachers’ ballots were found ineligible, the TFA ballots wouldn’t have been enough to sway the outcome of this election, so they weren’t counted.

However, the NLRB is still considering a litany of unfair labor practice charges filed against Detroit 90/90 that could invalidate the election and result in a new one being scheduled.

The company ran an aggressive and well-funded anti-union campaign, beginning even before the teachers filed for election. It hired union-busting consultants, held captive-audience meetings, intimidated teachers, and ultimately threatened that if teachers voted to unionize, it wouldn’t renew its management contract—which would force UPrep schools either to find a new management company or to shutter.

(The threat is credible. In April, another Michigan charter management company announced it would stop managing University Yes Academy after teachers filed for a union election. Nonetheless, on May 6, teachers there voted 27-18 to join the AFT.)

In one of the seven UPrep school buildings, on Election Day, an administrator disabled the entrance key-cards for all teachers to prevent them from voting.

After the election, the company retaliated by giving poor evaluations to campaign leaders. Some did not have their contracts renewed to teach next year.

“The attempt to strip TFA teachers of their voice was just another attack in a longstanding corporate effort to break down teachers’ collective bargaining rights,” said Nate Walker, a K-12 policy analyst and organizer with the Michigan AFT, working on the UPrep campaign.

“This ruling drew a line in the sand that will strengthen all teachers—in charter and public schools alike—as they continue to advocate for their students and for high-quality education.”

Patrick Sheehan was a Teach for America teacher at UPrep and testified at the NLRB hearing on the matter. You can reach him at @PSRealtweets.