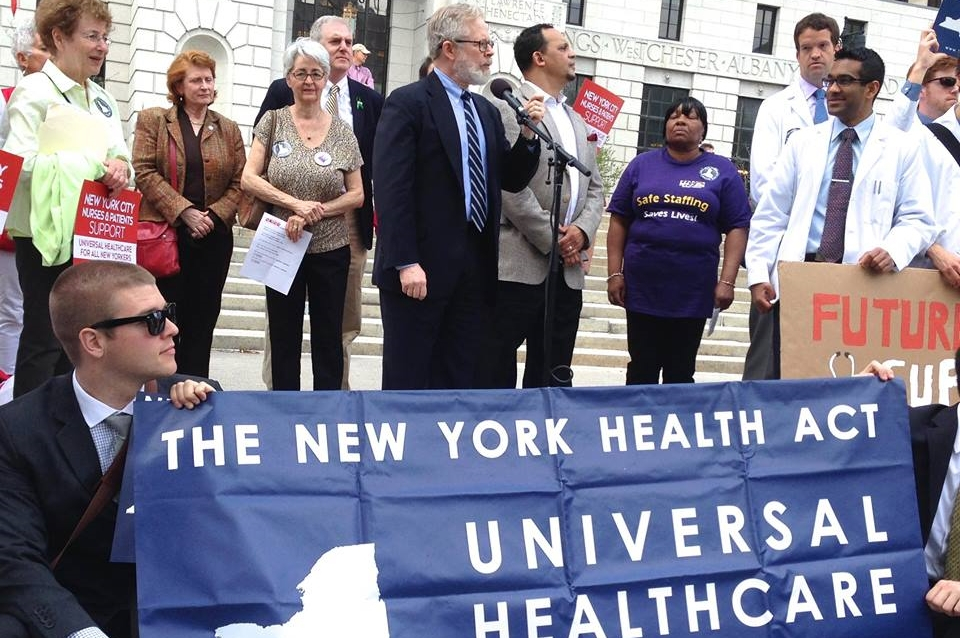 The bill isn’t expected to pass the Senate or be signed into law anytime soon. But getting it through, with unprecedented support from big unions, shows that state-level campaigns are still a fertile ground for health care justice organizing, despite the recent setback in Vermont.

The New York Health Act would eliminate private health insurance and cover all New Yorkers in a publicly financed, universal plan with no patient premiums, deductibles, or co-payments.

“We should be able to go to the doctor when we need to, without worrying whether we can afford it,” said its sponsor, Assembly Member Richard Gottfried. “We should choose our doctors and hospitals without worrying about network restrictions.”

Gottfried has led a decades-long effort in the Assembly for universal care. But the difference this time was the number of major unions actively supporting it. They gave the bill a big boost.

This year marked the first time they were joined by such influential statewide unions as Service Employees (SEIU) 1199 and New York State United Teachers (NYSUT/AFT).

Those unions’ lobbying efforts helped convince legislators the bill was politically viable. And their financial support was crucial to hiring community organizers in key regions.

The unions also participated in statewide hearings in January and mobilized members for Albany lobby days in May.

“In a just society, all people are entitled to basic health care. That’s why we are all here today from different walks of life: patients, health care providers, caregivers and community members, supporting single payer health care.”

Advocacy groups Healthcare NOW, Single Payer NY, and Physicians for a National Health Program were able to capitalize on the momentum to play much larger roles than in previous years.

Labor support for the initiative grew so strong because of how the Affordable Care Act has panned out. The much-heralded federal law has done little to ease bargaining-table pressures for health care concessions.

“Our members working in schools and college campuses want our state’s poorest students and their families to have access to quality health care services, so they arrive at school each day healthy and equipped to learn,” said Anthony Pallota, NYSUT executive vice president, at the January hearing.

“Our retirees, who tend to be our most medically vulnerable and fragile members, want affordable prescription medication and access to immediate health care.”

Despite the federal mandates, employers are still trying to offer less coverage and shift costs onto the backs of workers and retirees.

Another factor spurring unions to action is the looming 2018 implementation of the ACA’s “Cadillac tax.” This 40 percent excise tax will apply to all health insurance plan charges over $10,200 per year for individual coverage and $27,500 for family coverage.

These caps are set to rise at a much slower rate than the costs of health insurance, which means nearly all union-negotiated plans will eventually face the choice between radical cuts to coverage or paying the hefty tax.

Already, the tax has been a major issue in recent union negotiations with Boeing, oil refiners, and port operators.

While most health care justice activists would prefer a national, Medicare-for-All reform along the lines of Rep. John Conyers’ H.R. 676, in recent years the momentum has been growing for single-payer-style reforms at the state level.

At a time when any path to sweeping federal action appears closed, groups like the Labor Campaign for Single Payer and Healthcare NOW have supported state campaigns as a way forward.

The ACA may help facilitate these efforts—because, beginning in 2017, the federal government is authorized to grant states “innovation waivers.”

To be approved, the state’s plan must meet the law’s minimum requirements for coverage and cost-sharing, and cover at least as many residents at a cost no higher than what the federal government would have assumed.

“We believe that a victory for a publicly financed, universal plan in one or more states can provide a powerful impetus to the movement for national health care,” said Ben Day, executive director of Healthcare NOW.

State efforts suffered a setback when Vermont’s governor announced in December that he was suspending plans to implement Green Mountain Care, the single-payer-style program to realize the 2011 law that made health care a right.

Shumlin was scheduled to submit a financing proposal to the legislature in advance of the plan going into effect in 2017. Instead, he announced that health care for all was “just not affordable”—despite the fact that even his own economic estimates showed Vermonters would spend less for health care than they currently do.

Gerald Friedman, a University of Massachusetts economist, called Shumlin’s decision “political, not economic.” Nonetheless, single-payer opponents seized on the Vermont debacle as proof that universal health care at the state level is unworkable.

But the book isn’t closed. The law is still in effect, and hundreds have taken to the streets to demand its implementation.

The Vermont Workers’ Center—which maintains that the state still has an obligation to implement the law—issued its own financing plan, which it submitted to the legislature for consideration.

All health care justice campaigns, if they get far enough, will be forced to wrestle with the same conundrum Vermonters are facing. The closer they come to victory, the greater the resistance from the medical-industrial complex and free-market fundamentalists who viscerally oppose any form of social insurance.

In California, the legislature twice passed single-payer bills in the 2000s, only to have them vetoed by Republican Governor Arnold Schwarzenegger. Once Democrat Jerry Brown was elected governor, the movement couldn’t even find a bill sponsor.

California activists are gearing up for a multi-year project to muster the substantial funds and organizers it will take to win (and then defend) a single-payer-style system through the state’s initiative process.

Organizers in the strong, labor-backed campaigns in Oregon and Washington are also looking to use the initiative process if pending legislation founders. Oregon passed a bill to fund a study of alternative plans to ensure universal coverage.

New York will surely experience the same political challenges as Vermont and California. Nonetheless, the bill’s passage with such a big majority and the outpouring of labor and community support have given the national movement a welcome shot in the arm.

“This is a great victory, but now the hard work begins,” warned Joel Shufro, a longtime occupational health and safety advocate who worked to recruit unions to support the bill.

“Getting the bill through the Senate and getting the governor to sign it will be a long and difficult struggle. We must keep on building the grassroots movement if we ever hope to win the right to health care for everyone in New York.”

Activists will discuss and debate how to build this movement when they meet in Chicago, October 30-November 1, for the largest-ever single-payer national strategy conference.

“Our movement continues to grow, as people realize that the Affordable Care Act does not do enough to solve the health care crisis afflicting almost everyone in America,” said NYSNA Vice President Marva Wade. “We need to come together to finish the job and make health care a right for everyone.”

Mark Dudzic is the national coordinator of the Labor Campaign for Single Payer. He can be reached at mdudzic[at]igc[dot]org.

"The closer they (state campaigns) come to victory, the greater the resistance from the medical-industrial complex" -- and the Vermont experience shows that getting the required federal waivers is the challenge. See http://mrzine.monthlyreview.org/2015/andrews290415.html