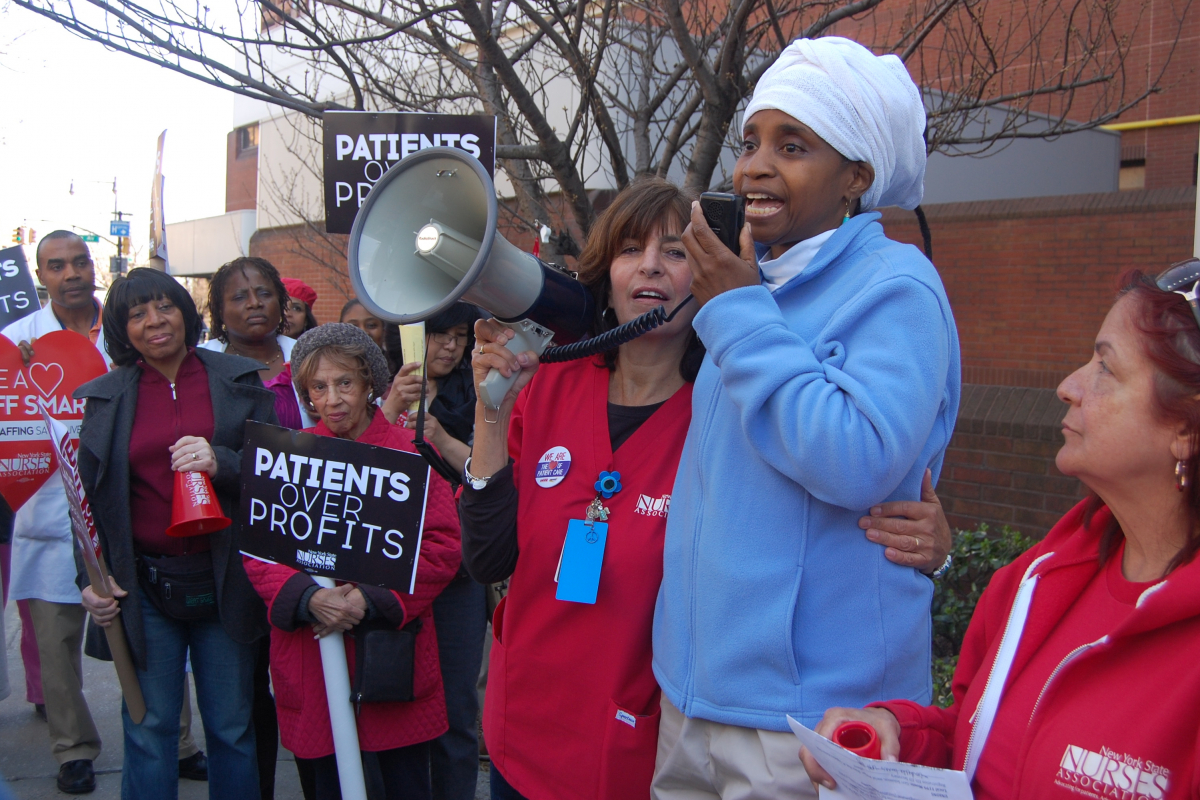 Thousands of nurses at 12 hospitals poured into the streets of New York City April 16 to protest staffing shortages they say put patients at risk.

“We used to see 250 patients a day in our E.R.,” said Nancy Hagans, a nurse at Maimonides Medical Center. “But then two hospitals in Brooklyn closed and now we’re seeing 400 a day, with the same number of nurses. How can we be the advocates we took an oath to be?”

The informational pickets were the latest salvo in negotiations with the city’s largest private hospitals. Next the New York State Nurses Association entered a month of intense federal mediation with three hospital systems.

Voting for strike authorization could begin as soon as mid-May.

The goal is not to strike, said Anthony Ciampa, a telemetry nurse at New York Presbyterian Hospital and member of NYSNA’s executive board.

“But we won’t be ignored,” he said. “If it comes down to it, we’ll strike to protect our patients and our communities.”

Now the nurses union is putting common demands on every table. At most hospitals it’s conducting open bargaining, with as many as 200 members showing up to participate in negotiations.

The new approach stems from a leadership change inside NYSNA three years ago, after a slate of bedside nurses wrested control of the executive board away from the nurse managers who had historically dominated the organization.

“We’re trying to build a real union,” said President Judy Sheridan-Gonzalez. “But there are no shortcuts. Members have to do the work.”

She stressed the union’s push to connect with community members and co-workers in other unions, especially 1199. At her hospital, Montefiore Medical Center, nurses have been participating in local meetings of the city’s community board, where they’ve gotten to know activist residents and highlighted problems like emergency room overcrowding.

Rank-and-file 1199ers, along with other hospital workers, were enthusiastic participants in NYSNA’s picket lines.

On their key issue, staffing, the nurses have a double-barreled strategy—stronger contract standards and statewide legislation to guarantee minimum nurse-patient ratios.

On the heels of the informational pickets, a thousand nurses flooded the state capitol April 21 to press for safe staffing legislation.

If New York adopts a staffing ratio law, it will be the second in the nation. California got a similar measure in 2004 after a major push by the California Nurses Association.

NYSNA’s contract campaign bore its first fruit late last year, when the CEOs of three of the city’s biggest health care systems—covering 10,000 of the 18,000 nurses now in negotiations—agreed to multi-employer bargaining.

This could be the first step towards an 1199-style master contract. But hospital administrators have shown little appetite for the nurses’ top demand, enforceable staffing standards—much less their non-traditional proposals.

In an interesting twist, the nurses have proposed eliminating the management rights clause from their contracts. They would replace it with a “community rights” clause that would sanction nurses to evaluate local public health needs and review their findings in regular meetings with the CEO.

Nurses are also pushing for stronger guarantees that they won’t lose their jobs when hospitals close, merge, or are taken over.

This issue has taken on a new urgency in New York after a wave of mergers and a high-profile NYSNA fight to keep two Brooklyn hospitals from closing. Hospitals are planning even more sweeping changes as they vie for $6 billion in one-time federal funding.

While bargaining at the “big table” has slowed negotiations everywhere else, NYSNA is in a strong position. Some of its demands, like fully paid retiree health care, have been longstanding benefits for co-workers in 1199.

And 1199’s latest contract, finalized last summer, set the precedent that union workers had the right to follow the work outside the hospital into clinics and doctors’ practices.