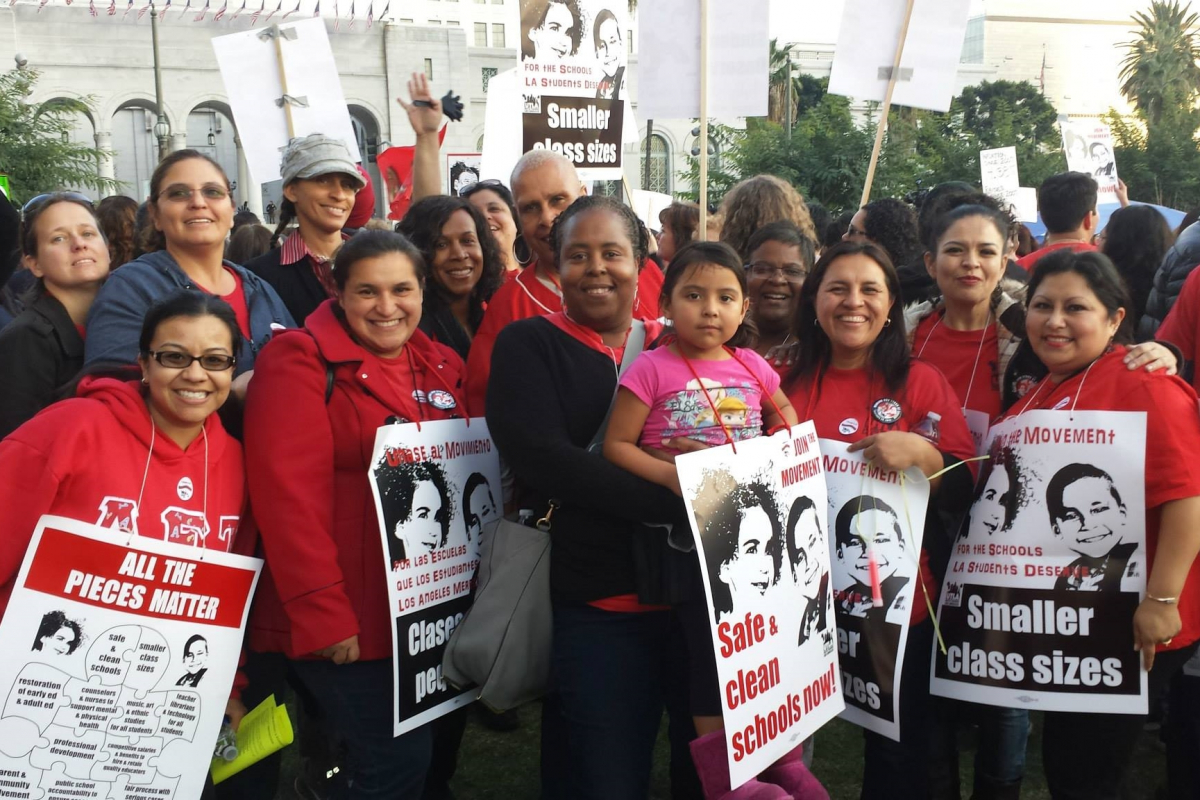 Instead of unionizing school by school, they’re pushing Alliance College-Ready Charter Schools to agree to ground rules for organizing, without boss interference, at all 26 schools in the chain.

The teachers want a say on such questions as class size and incorporating technology. They want to be able to speak up without fear of retaliation from management.

“You want to say something—with everything you know about teaching, working with students, your subject matter—about what doesn’t work,” said Michael Letton, a teacher at Alliance’s Stern Mass High School. “But you are afraid to say something, because you won’t be asked back next year.”

The organizing is part of United Teachers Los Angeles’ strategy, under new leaders elected a year ago, to help charter teachers win union standards and job protections—and to stop the non-union sector from undermining standards at district schools.

L.A. has 100,000 charter school students—more than any other U.S. city. The union represents 31,000 district employees, including teachers and counselors, and 1,000 charter teachers so far.

In Alliance, the union is taking on an ambitious campaign. The charter chain is politically well-connected and touts its success raising test scores in low-income areas. Since opening its first school just a decade ago, it has grown into L.A.’s largest charter operator, enrolling 11,000 students and employing 600 teachers.

Chalk up that rapid growth, in part, to Alliance’s elite ties and ample funds from the Broad Foundation—a leader in the push for more charters.

The chain’s board includes a former L.A. mayor, a sitting judge, and representatives from “wealth management” and private equity firms. Its CEO spent 11 years managing Broad.

L.A. is a hotbed of corporate-sponsored education reform. Even though it has an elected school board—unlike New York, Chicago, or Philadelphia—many district officials have ties to charters and education corporations.

Nowhere were the consequences more visible than in last year’s iPad debacle.

The district announced plans to give every student an iPad, at both charter and district schools. The catch: each device was filled with content related to the Common Core standards, installed by the for-profit Pearson.

The billion-dollar deal was riddled with conflicts of interest. The bidding process was tailored to Apple and Pearson. One of the district officials overseeing the contract had worked for a Pearson subsidiary. The superintendent even appeared in an Apple commercial, touting the tablet as the superior education tool, before the decision was made.

A rushed rollout meant schools had no plan to deal with lost or stolen devices. There were added costs for keyboards. The devices didn’t have enough safeguards to stop students from playing games and surfing the Web.

Both charter and district teachers questioned whether expensive iPads were the best approach to bringing new technology into classrooms—or the best use of limited funds.

“With the amount of time I have to spend monitoring them, I looked in the budget and I saw how much money we spent,” Letton said. “We could have new teachers. We could have smaller classes.”

After the union complained about the conflicts of interest and bumpy implementation, the iPad boondoggle was scrapped. Superintendent John Deasy resigned. The FBI is investigating. And the district is asking Apple and Pearson for a refund.

To discourage organizing, Alliance has needled the union for failing to shrink classes, raise pay, or resist layoffs in the public schools.

But the union tackled those problems head-on in its just-settled contract campaign. District teachers allied with parents and students for shared demands like smaller classes and more support staff. On April 18, the union announced a tentative agreement featuring its first-ever language on class sizes and counselor ratios.

And UTLA has already organized several charters, where teachers won first contracts with due process and wage increases linked to experience rather than performance ratings.

Helping Alliance teachers organize “is one other example of how UTLA is supporting the schools L.A. students deserve,” said Vice President Betty Forrester. “We are raising the voice of educators. For us, it’s not a separate campaign.”

In March, teachers and counselors from 10 Alliance schools signed an open letter declaring their intention to organize. The company lashed back with letters to parents, claiming the union would hurt instruction by imposing a rigid, one-size-fits-all model.

But teachers say the opposite is true: that describes what it’s like to work for Alliance right now.

“With any charter organization, the pattern is a very corporate culture,” said history teacher Elena Goldbaum, who works at the chain’s Gertz-Ressler High School. “The decisions are made at the top. They are delivered to everyone else.”

Letton said class sizes used to be manageable back when he started at an Alliance high school in South L.A. But as years went by, the classes got larger, sometimes up to 40 students.

Rather than raises based on years of experience, Alliance boasts that it offers performance bonuses—something corporate reformers have been trying to push onto district schools too. But Goldbaum said merit pay makes educators vulnerable.

“It intensifies the worry of teachers speaking out,” she said. “Just the fact that the power [to decide raises] rests in our superiors makes people feel unsure about expressing themselves.”

These problems show up in Alliance’s high turnover rate, which the union estimates is over 25 percent. “So many good teachers up and leave after two years,” Letton said.

Nationally, charter schools have 18 percent turnover, versus 14 percent in non-charters.

Alliance paints the union as anti-charter. But UTLA officers argue they’re against creeping privatization, not individual charters or employees.

They want to regulate the industry so charters don’t grow at the expense of public schools. For instance, the union has backed legislation to prevent charters from opening inside district school buildings.

“There is competition for enrollment” between charter and district schools, Forrester said. When new charters open, they often pull students from traditional schools. That raises the threat that the district will use under-enrollment in a school as a reason to cut funding, lay off teachers, or co-locate a charter there.

But district and charter teachers should work together inside UTLA, Forrester said: “That’s an issue better to discuss as brothers and sisters, rather than through competition.”

Alliance teachers are gathering co-workers’ signatures on a system-wide petition. They’ve launched a website and a Facebook page to engage fellow teachers and show the public why they want to unionize.

A few weeks after their public letter, Alliance kicked off its anti-union campaign, targeting parents and teachers with emails, letters, and focus group-style meetings. The new CEO even started touring schools to show he listens.

UTLA has already complained to the state labor board that Alliance has broken the law by restricting organizers’ access to schools, blocking the union’s emails to teachers, and stopping teachers from distributing union materials at work, even during break time.

“The day we went public, they quoted [labor law] about our right to access,” Goldbaum said of Alliance management. “That has been thwarted at every turn. We have had to be in the shadows.”

UTLA has organized other L.A.-area teachers under the state board, which governs California’s public employees. That process allows for card check, meaning the union is recognized once it gathers signatures from a majority of workers. (In other states, charter companies have asserted they are private entities, to force workers into an election.)

Still, California’s law—like the national law that covers private sector workers—gives companies a lot of leeway to devote work time to union-busting and to delay a campaign with legal challenges. Even when bosses break the law, the penalties are weak and slow in coming.

That’s why the teachers want a neutrality agreement for their union drive. Alliance says there’s no need.

‘IN THE SAME BOAT’

Neutrality pacts have been used to organize such industries as hospitals and hotels. Management agrees not to campaign against the union. Both sides often agree not to publicly disparage each other, which can help companies avoid public relations problems.

In Chicago, teachers built on the momentum of their overwhelmingly popular 2012 strike for “The Schools Chicago Students Deserve” when a year later every school in the city’s largest, most politically-connected charter chain unionized.

One key difference is that Chicago’s UNO chain was already mired in scandals over self-dealing—a key point of leverage that helped win a neutrality agreement.

In L.A., educators hope to build leverage for a deal with the image-conscious Alliance by making the case, particularly to parents, that the union can help teachers advocate for students.

Teachers are passing out fliers to parents before and after school, gathering endorsements from elected officials, and reaching out to community groups.

“I don’t think having a unionized charter takes away from the mission,” Goldbaum said “Public school teachers and charter teachers are in the same boat. We love what we do. We want to have a voice.”

A version of this article appeared in Labor Notes #434, May 2015. Don't miss an issue, subscribe today.