Wisconsin, Round Two: As Unions Hesitate, ‘Right to Work’ Advances 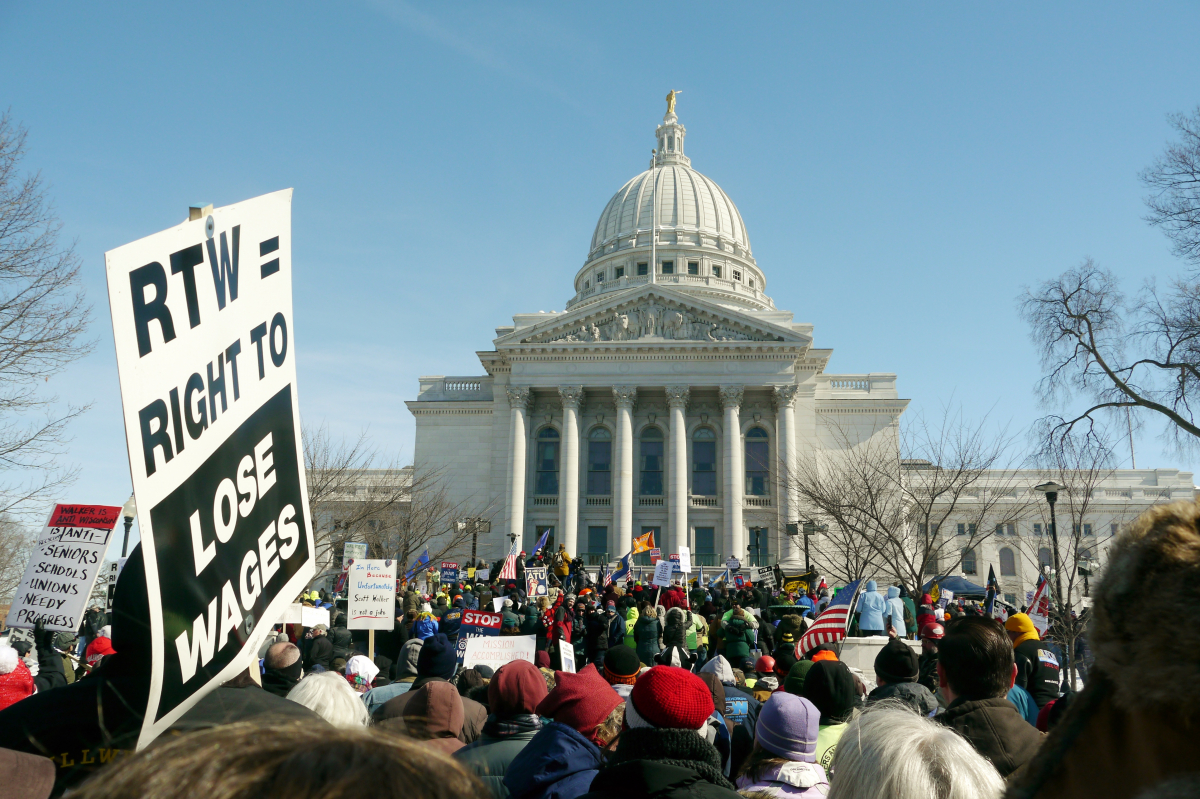 Wisconsin is being hit by the anti-union legislation and a stark austerity budget bill at once. Thousands are rallying in last-ditch protests. But behind the scenes, grim labor leaders have largely taken a resigned attitude. Photo: blue cheddar (CC BY 2.0)

The vote followed 20 hours of testimony, begun at 1 p.m. yesterday. But just minutes in, after a "People's Mic" action by labor supporters, officials had police clear the Assembly gallery. The hearing continued without public observers, just media. –Editor.

Over the objections of labor, community members, and even some businesses, Wisconsin is about to become the 25th state to pass a “right to work” law. It’s expected to be effective immediately upon the governor’s signature on March 6 or 9.

Wisconsinites are now swallowing it as part of a larger attack that includes a stark austerity budget bill being debated at the same time.

Walker was a champion of “right to work” many years ago as a young legislator, and the legislation’s return has been predicted since Act 10 hit public workers in 2011. Even so, Walker minimized the issue on the campaign trail. However, immediately after the November elections, Republican leaders signaled that they planned to pursue it.

The threat was real; there were enough Republican votes to pass it. Some hoped Walker’s presidential campaign might delay the issue, but this was not to be.

Most indicative of the situation is the response of organized labor since November, when the threat became clear.

The building trades—which have become a more dominant force in labor since public employee unions were decimated by Act 10—relied on a strategy of convincing their employers to oppose it.

Surprisingly, the trades came up with a coalition of over 400 businesses opposing the legislation, including large construction businesses and some road builders. Since November this coalition has been the most visible party opposing “right to work”, using TV and print ads.

But behind the scenes, labor organizations were otherwise inactive—apparently because of the desire not to conflict with the successful building trades effort and not to alienate potential Republican allies.

In the end the bill passed the only legislative chokehold, the Senate, 17-15, with one Republican opposing it. This close margin highlights why opponents had hoped their lobbying could pick off enough opponents.

Yet others are surprised even one Republican would break ranks. Since 2011 Wisconsin Republicans have maintained a strict party discipline, backed up by well-funded primary challenges to unseat Republican incumbents who try to act independently.

Since November, labor had hoped against hope—but the game was up February 20, when Republican legislative leaders announced they would call a special session and fast-track “right to work.”

At the last moment, the Wisconsin AFL-CIO began to run TV ads; it held multiple rallies in Milwaukee and at the Capitol in Madison. Union members were bused in from around the state.

Thousands attended each rally, even as weather hovered near 0 degrees at times. Many building trades and other private sector unionists were there. So were public sector unionists and community supporters.

The large and spirited rallies brought to mind the 2011 uprising, where there was even larger and more sustained protest of this kind, plus an occupation of the Capitol building.

This time, many rally attendees openly acknowledged that other creative tactics will be needed—but these approaches aren’t even on the drawing board yet.

Behind the scenes, grim labor leaders have largely taken a resigned attitude. Private sector unions are scrambling to educate members about “right to work” and the importance of staying in the union. At the 11th hour, some have launched a one-week blitz to extend union contracts ahead of the new law—to buy more time to convince members to stay.

A handful of unions, such as the Operating Engineers, that have supported Walker in his election campaigns are now bitterly contemplating their final betrayal. The building trades are braced for yet another blow this session, as prevailing wage laws and project labor agreements are likely to be attacked.

Concurrent with the “right to work” struggle is a full-scale rightwing assault on the state’s public sector.

After manufacturing a large deficit via tax cuts that favored the rich, the governor and legislature are pursuing an austerity program to “balance” the budget by the end of May. The bill is a litany of the right’s favorite ideas, including drug-testing applicants for FoodShare and unemployment insurance.

Wisconsin’s biennial budget bill has increasingly included non-budget policy changes in recent years—and this round it’s even more dramatically so.

It began on the January opening day of the legislature, with the introduction of a major K-12 school funding bill that would give money to charter and voucher schools at the expense of public schools. The plan was to grade public schools on a curve, charterize the low performers, and repeat.

The budget proposes large cuts to the SeniorCare program (Medicare Part D alternative for low-income seniors to buy drugs), restructuring and attacking the workers compensation program, major cuts to Wisconsin Public Radio and TV, and large changes to environmental programs, including cutting a large number of scientist positions at the Department of Natural Resources. It eliminates whole shifts of guard jobs in prison towers, once a sacrosanct powerhouse of public sector unions.

It particularly attacks the University of Wisconsin—and this might be a place to start fighting back.

University in the Crosshairs

The budget’s massive $300 million cut to the UW system, if satisfied entirely through staff cuts, would force over 1,000 layoffs—or the closure of a branch campus.

It also proposes ending the university’s status as a state agency, instead spinning it off to a quasi-private “public authority.” This change, touted as “flexibility” from state oversight, would end such obligations as reporting sexual abuse incidents. The university system’s regents, appointed by the governor, would have sole authority to raise tuition, for instance, or end tenure.

The graduate employees union, the Teaching Assistants’ Association, has a history of strikes. With allies, it might be capable of leading a fight against the extreme cuts to the university.

For now, though, Wisconsin workers are at a nadir, lower than our defeat in 2011. We are dreading the pain these new laws will bring. But we are not weighed down by as many illusions.

Wisconsin citizens and labor can fight back together for a brighter future—but the work of building a consensus on how to do so has just begun.

Barbara Smith is a member of the Wisconsin Professional Employee Council, AFT Local 4848.

Related
After Strike Threat, Wisconsin Nurses Get a Possible Path to Union Recognition »
Wisconsin Nurses Set to Strike, As Employer Claims It's Banned from Bargaining »
Richmond Educators Are First In Virginia to Win Bargaining Rights »
In Firefighters Election, Can a Veteran of the Wisconsin Uprising Come Out on Top? »
Janus for the Rails and Air? »