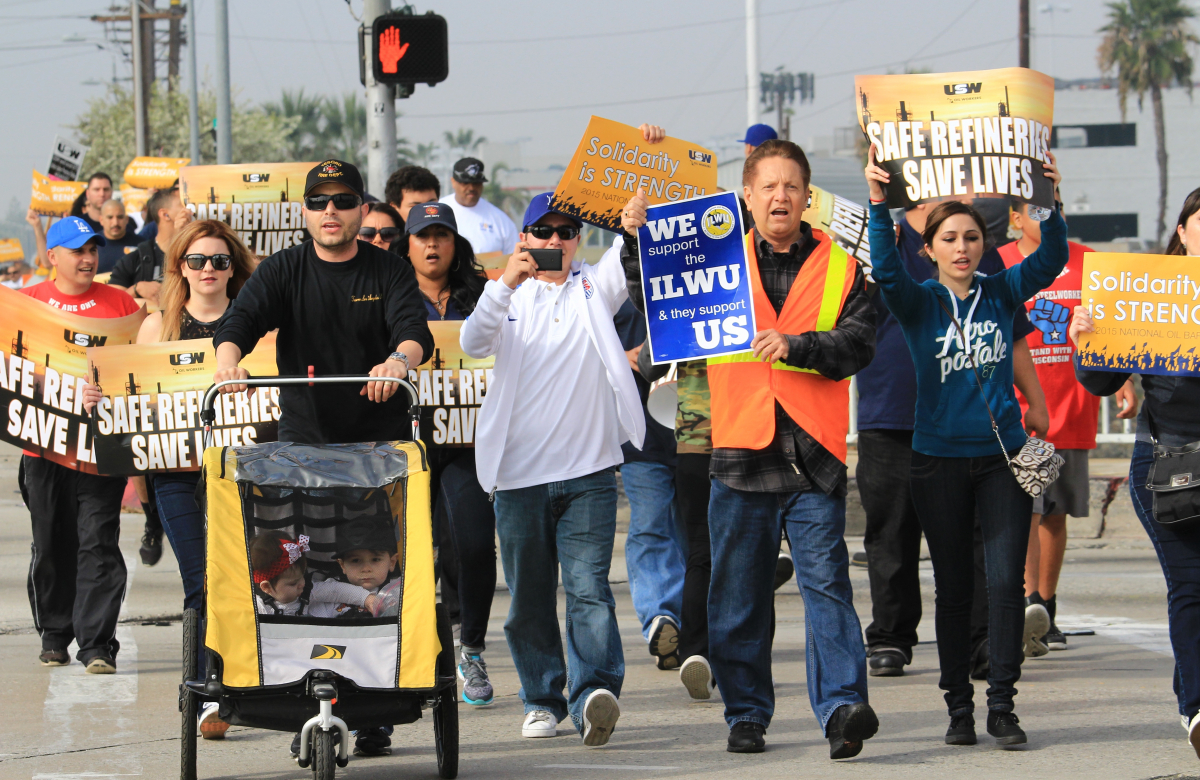 Thousands of oil refinery workers are on strike over health and safety. They cite outsourcing, short staffing, and forced overtime that produces dangerous fatigue—in a job where mistakes can be fatal. Photo: Slobodan Dmitrov.

UPDATE, March 12: The United Steelworkers announced a tentative agreement with Shell Oil, expected to be a pattern agreement for the rest of the industry. The union says the four-year deal "calls for the immediate review of staffing and workload assessments, with USW safety personnel involved at every facility," with hiring plans to be developed; addresses daily maintenance work; maintains the health care cost-sharing ratio; and includes yearly raises.

The first national oil refinery strike since 1980 is in its fourth week, and thousands of strikers are holding out for stronger measures to protect workers and surrounding communities from plant hazards.

Workers cite outsourcing, short staffing, and forced overtime that produces dangerous fatigue—in a job where mistakes can be fatal.

Though the company paid lip service to the damage, at the bargaining table the employer coalition continues to stonewall on safety.

Outraged local members teamed up with Occupy activists to respond. Dressed in hazmat suits, they delivered a dump truck full of manure to ExxonMobil’s area administrative offices. Inside the office they staged a sit-in, demanding answers from the company and local police.

“Why is it illegal to deposit organic material on corporate property,” Campbell asked, “but perfectly legal for a corporation to drop toxic materials on a community?”

The strike, which has been escalating in phases as the union brings more refineries out, now includes 6,500 workers and affects one-fifth of U.S. oil production capacity.

The Steelworkers represent 30,000 oil industry workers at 63 refineries plus related oil terminals, pipelines, and petrochemical facilities. Together they produce 65 percent of the country’s oil.

Agreements covering most of these members are bargained at a national table with the large oil companies, led by Shell. Once a national pact is reached, local unions will hash out contract details with each company.

To lead the strike, which began February 1, the union selected nine strategic refineries in Texas, Kentucky, Washington, and California—totaling 3,800 workers—where the strike would pack a special punch.

Factors in the choice included particularly harsh employers and sites with strong member participation. Another factor was pressuring companies that buy the oil they refine, since the strike may hit them harder than the more profitable companies that extract their own oil. Half the striking refineries are in Texas, the U.S.’s top oil-producing state.

That and two other striking refineries and a chemical plant are owned by Motiva, a joint venture between Shell and a Saudi oil company.

Non-striking refinery locals are getting 24-hour contract extensions each day.

In 1980, workers at all the union refineries went out together, and stayed out for three months before they got a deal.

When oil refinery workers walk onto the job, they enter a world of hazards. Any mistakes or malfunctions can harm workers inside—and also the surrounding community.

Workers know the worst-case scenario all too well. An explosion at a BP refinery outside Houston in 2005 killed 15 workers and injured nearly 200. The refinery, later sold to Marathon, is one of the facilities on strike now.

“We have a lot of forced overtime,” said Dave Martin, vice president of the local striking the Marathon refinery in Catlettsburg, Kentucky. “That was one of the main issues in the Texas explosion: people working overtime and not making the right decisions.”

The BP refinery in Whiting, Indiana, where over 1,000 workers are on strike, had an explosion February 23, though luckily no one was injured. A 2012 explosion at a Chevron refinery in Richmond, California, sent thousands of residents to the hospital after they breathed in toxins; a dozen workers narrowly escaped being killed. A 2010 refinery explosion in Anacortes, Washington, killed five workers.

To avoid similar accidents, the Steelworkers are trying to secure stronger safety protocols in national bargaining and keep management from subcontracting maintenance work.

Though there’s already some contract language to avoid working tired, the union says managers skirt the rules. For instance, workers are supposed to have rest days after double-digit consecutive days working—but Martin says it’s not happening.

“As you get older, it takes more time to recover,” he says. “A day off here and there helps, but it doesn’t heal you up enough to where you are 100 percent.”

And when employees leave, managers aren’t filling empty spots; they’re forcing others to pick up the slack with overtime. “If they staffed this refinery, it would create 150-200 full time jobs in our community,” Martin says.

Shell has put seven offers on the table to settle the strike. The Steelworkers rejected each one. “They have a whole bunch of words on the page, but no enforceable language,” Martin said.

“The fatigue issue has been a very big problem in this industry,” says Jim Savage, president of a Pennsylvania refinery local. Though his local isn’t on strike (the refinery recently changed owners), he’s been at the national bargaining table.

And, he says, “that problem has consistently gotten worse. These companies are trying to run very lean.”

Though oil prices are low, oil companies are still raking in the profits. The big five—BP, Chevron, ConocoPhillips, ExxonMobil, and Shell—made almost $90 billion in 2014.

“Let’s face it,” Savage says. “This is the wealthiest, most powerful industry in the history of the world.”

The strike has garnered support from national environmental groups and activists, such as 350.org founder Bill McKibben and Oil Change International, who recognize that workers advocating for their own safety are also protecting the public. Oil companies have a long, sordid record of causing spills and accidents by cost-cutting.

Another key safety issue in bargaining is that day-to-day maintenance work, originally done by union members, is now being contracted out to untrained, nonunion workers. The Steelworkers emphasizes that full-time employees receive health and safety training from both the company and the union.

While raises are being bargained too, the union stresses they aren’t the central issue. The Steelworkers do want the companies to lower the out-of-pocket caps on workers’ health insurance, which can amount to thousands of dollars.

The struck refineries are operating, run by managers or engineers—except one in Martinez, California, which the company claims is closed for planned maintenance. In Kentucky, workers represented by building trades unions have crossed the picket lines to do contract work.

The Steelworkers and some building trades unions have clashed in the past over jurisdiction for some work done inside the refineries, though the striking union insists that isn’t what’s being discussed at national bargaining. It was tense enough that building trades unions in Southern California blocked a labor council from endorsing the strikes.

As the strike goes on, the Steelworkers will have to weigh bringing even more locals out on strike to increase pressure.

Meanwhile, Martin reports that the Catlettsburg strike has found local support. The union is receiving messages of solidarity from neighbors. Community members and businesses have been bringing food and supplies to the picket line.

“They know that the oil industry makes billions,” he said. “They know the dangers in the facility, what goes on day in and day out. They want us in there.”

The original version of this article was published February 5, but the present version has been updated to reflect the expansion of the strike and other developments.

A version of this article appeared in Labor Notes #432, March 2015. Don't miss an issue, subscribe today.