Why 2,600 Kaiser Mental Health Workers Are On Strike 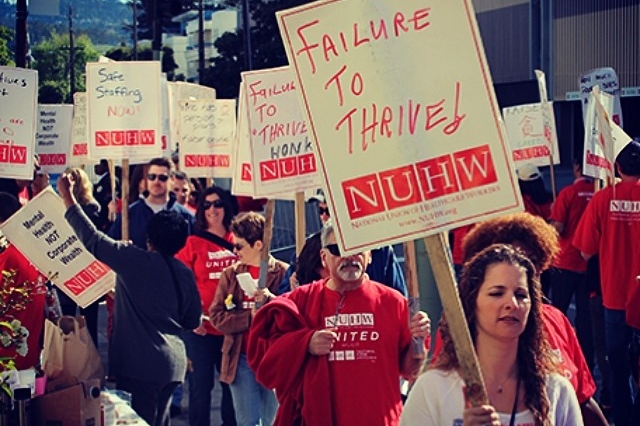 Kaiser workers have already held several short strikes over unsafe staffing, most recently this April 23, 2014, one-day strike by mental health clinicians. But since then the problems have only gotten worse. Photo: NUHW.

Kaiser Permanente’s 2,600 California mental health clinicians are on strike today, and we’re staying out all week.

Mental health clinicians hate to strike. We got into this profession to help people. But every day we are forced to apologetically explain to Kaiser members why they cannot get the timely, appropriate care they pay for with their monthly premiums—care that Kaiser is required by law to provide.

That’s because, despite its huge profits, Kaiser does not staff its psychiatry departments with enough psychologists, therapists, social workers, and psychiatric nurses to treat the ever-growing number of patients seeking mental health care.

Our schedules are booked solid, forcing patients in dire need to endure lengthy and illegal waits for treatment. The California Department of Managed Health Care cited and fined Kaiser $4 million in 2013 for these “serious” and “systemic” violations of state law, including falsifying patient records to conceal wait times.

Kaiser claims to have fixed the problems since then, but we who work on the front lines in psychiatry departments know that it has merely rearranged the deck chairs on a sinking ship. Instead of hiring more staff, Kaiser directed staff to see more first-time patients at the expense of returning patients. Patients may find it easier now to get a diagnostic appointment—but they have to wait four to eight weeks for treatment to begin.

For patients suffering from depression, anxiety, and other debilitating mental conditions, these delays are unbearable. Some have even died by suicide during the lengthy delays.

As mental health clinicians, we have an ethical obligation to advocate for our patients—patients whose conditions often make it difficult for them to advocate for themselves.

NUHW briefed a dozen mental health advocacy groups December 10 at the National Press Club in Washington, D.C., on our concerns and our intention to strike. All were supportive. Other psychiatric associations have written letters in support.

The situation is only getting worse. This year, under the Affordable Care Act, Kaiser’s enrollment has increased by a quarter-million members in California. Staffing levels, already painfully low, are not keeping pace with enrollment growth.

Withholding services while increasing membership is an effective way to score record profits—Kaiser has made more than $14 billion since 2009, and this year’s profits are up 40 percent over last year’s record—but it has led to woefully inadequate care.

Over the past three years patients and families who have suffered as a result of Kaiser’s violations have filed four class-action lawsuits.

We know Kaiser has contracted with at least two recruiting firms to bring in scab workers.

Our previous, shorter strikes aimed to raise public awareness and show Kaiser we are serious. We hoped a longer strike wouldn’t be necessary.

The California Nurses Association, also in contract negotiations with Kaiser, held a two-day strike in November over its own staffing concerns, and has announced another strike for later this month. The “Labor-Management Partnership” unions, including SEIU-UHW, still have a national contract in force with Kaiser, but it comes up for renegotiation this year.

Kaiser’s disingenuous statements to providers and journalists regarding its crisis of understaffing have been all over the map. Kaiser has claimed 1) it has no problems in its psychiatry departments; 2) all its problems have been solved; 3) the problems it faces are common to all health care providers; and 4) Kaiser cannot solve its problems because we—the very clinicians who brought the problems to the attention of Kaiser, state regulators, and the public—are standing in the way.

Even Dave Regan, president of Kaiser’s “partner” union SEIU-UHW, is playing the denial game. In a December 4 story he told Modern Healthcare that Kaiser’s staffing problem “was a limited one and has been completely solved.”

His eagerness to dismiss our well-documented claims is a sad commentary on the state of the labor movement. Regan’s union does not represent Kaiser mental health clinicians. A recently signed deal with the California Hospital Association prevents SEIU-UHW members from advocating for patients and acting as whistleblowers. By leaving SEIU-UHW for NUHW, we preserved our right to speak up.

In contract bargaining in December, we presented Kaiser with a commonsense solution: clinician-management committees in each facility that can work together to determine adequate staffing levels and outsourcing needs, with help from a neutral, outside expert if the two sides cannot agree.

It’s an effective solution already in place in other health care systems. But once again, Kaiser failed to act.

With soaring profits and a $30 billion reserve, Kaiser is in a position to lead the way in finally making mental health care a priority in this country. The law requires it, and Kaiser’s ethical obligations as a health care provider demand it.

Clement Papazian is the elected rank-and-file president of the National Union of Healthcare Workers’ Northern California chapter of mental health clinicians. He is a clinical social worker at Kaiser’s Oakland Medical Center.

Correction: Since this article was originally published, a misleading reference to Santa Rosa and Petaluma has been removed.