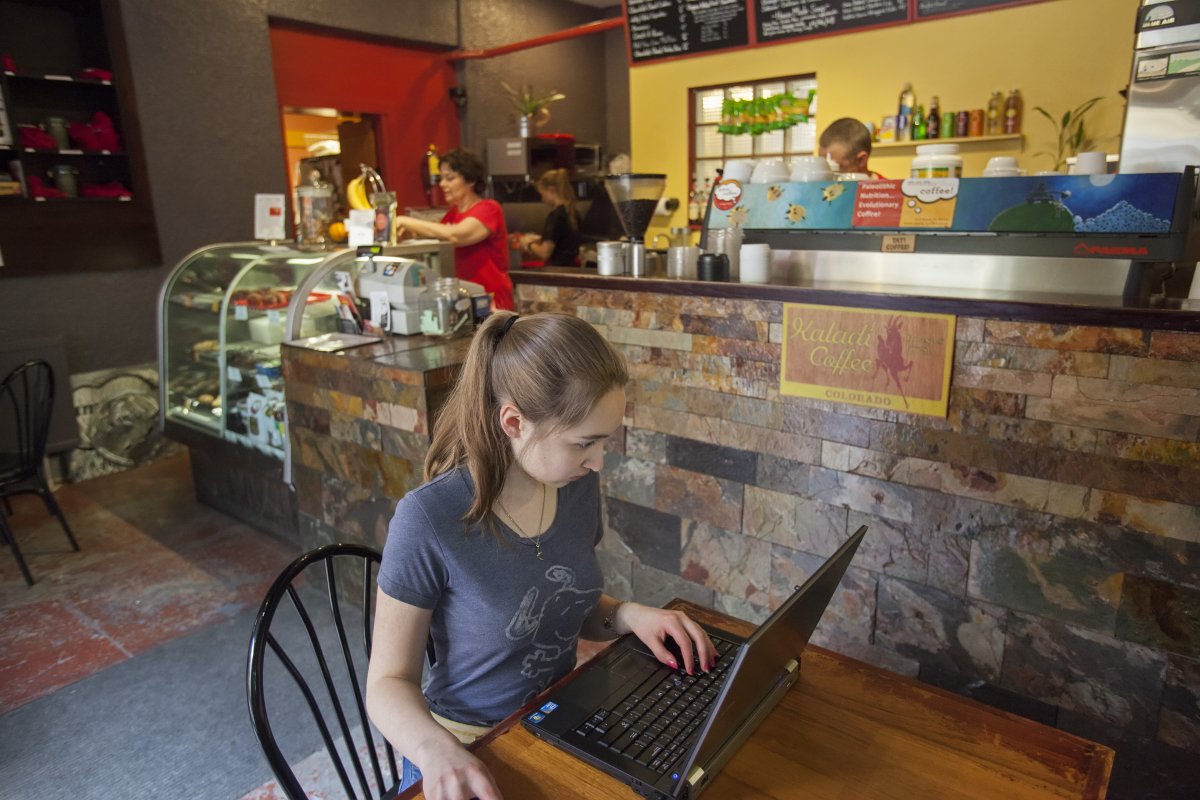 Ferris Fynboh, 15, of Denver, studies at an online, virtual high school. Here she does schoolwork at a restaurant her parents own. Teachers have seen a rapid expansion in online high schools. Photo: Jim West/jimwestphoto.com.

Turning the usual rivalries upside down, “virtual teachers” in an online charter school system in California are pushing to unionize.

For decades the privatization push has pitted unionized district teachers against non-union charter schools. It’s only recently that unions have begun organizing teachers in brick-and-mortar charters—much less those who work online.

Cara Bryant started working at California Virtual Academies in 2006. She’d been looking to get back to teaching after having a baby. With the flexible schedule and the option to work from home, the job seemed like a good fit.

It was CAVA’s first year offering full-time, at-home online lessons for high-school students. At first, most students were there because they were already being homeschooled by their parents, or because they were pulled away from full-time school by acting or athletic endeavors: Olympic training, for instance.

The focus was on subject instruction; Bryant taught biology and physical science. She held weekly live (online) teaching sessions. The rest of her time was spent grading work, checking in with students by phone or email, and reaching out to those who were struggling.

“To be successful, you have to be self-motivated and organized,” Bryant says, and you need a parent helping and supervising your studies during the day. Many new students didn’t meet these criteria.

As CAVA’s enrollment climbed to 16,000, workload increased sharply. When Bryant started, she says, most teachers had around 150 students to cover in their subject area. That number rose 50 percent.

CAVA also started requiring teachers to complete administrative tasks such as monitoring attendance (noted when a student logs in each day) and tracking down unengaged students and their parents, mostly by phone and email.

Bryant used to know who all her students were, and they knew her, but “that connection isn’t there anymore,” she said. Teachers are expected to check in with all students, and they try to, but it isn’t always possible.

“It’s basically triage now,” Bryant says. “Anyone who is passing is considered okay.”

How do you organize a union when you have no workplace? For CAVA online educators, their “school” spans the state of California—so there’s no chance to meet in the break room to swap info or strike up conversations.

Still, just like a traditional organizing drive, they formed an organizing committee. The 40-person group meets regularly online, through a videoconferencing app.

“It’s really helped that a lot of our teachers are tech-savvy,” said committee member Cara Bryant.

To demonstrate majority support on a petition, they didn’t have the luxury of getting people to sign at work. Instead they created an email list.

Teachers on the organizing committee called teachers in their networks and talked to them about what improvements they wanted to make. Supporters could download the petition and mail it back.

One of these groups, the CAVA Water Cooler, is a place for teachers to socialize, share stories, and vent. The second is a group for supporters. The third is a private meeting space for the organizing committee to plan.

To increase support and keep supporters updated, the educators phonebank regularly. They use an online program to upload phone numbers and streamline calling. They also use a text messaging service to send text blasts and reminders to their supporters.

They’ve also met in person several times, including regional meetings and at the state labor relations board hearing. “Nothing’s going to replace actually seeing each other,” Bryant said.

But by setting up online spaces the group has filled a void for CAVA employees. “People are talking to each other who have never actually communicated before,” she said. “That was an effort to build community that was lacking.”

Hodge believes some students with social anxiety or processing disorders are well suited for online schools. But she says she spends 65 hours per week just completing administrative tasks, taking her time away from students.

“We basically quadrupled our student enrollment since I started with CAVA, but we haven’t increased our administrative staff,” Hodge said. “All administrative duties fell onto teachers. It’s been very difficult.”

She said K12 has also made it more difficult for teachers to address students who aren’t suited for CAVA’s online classes—for example, a student who didn’t log in or attend classes for 16 consecutive days.

Yet instructors are evaluated based on student performance criteria, including attendance. “People are getting written warnings for missing deadlines,” Bryant said, “for things out of their control, like parents not getting back to them.”

Nationwide, K12 has 275,000 students enrolled in its programs full-time. CAVA teachers aren’t the only critics who say resources in online schools aren’t being invested in students.

“We find [only] about one-third of [K12] online schools are classified as acceptable,” said Gary Miron of the National Education Policy Center.

His research found an achievement gap between online and in-person schools. For grades 3-7, online students were 5-10 percent behind state averages. For high schoolers, the gap widened to 35 percent.

Miron says K12’s expansion push is failing its students. “The [online school] model can only work if you have a parent in the house as a primary instructor,” he says. He has serious concerns about the viability of full-time online schools for a broad student population.

Instead of focusing on the few students who aren’t suited for traditional schools, the company has opened the floodgates. Much like pharmaceutical companies that advertise drugs to cure the ailments you didn’t know you had, online schools advertise to a general audience.

K12 markets to parents, pitching an individualized approach to education—but also directly to students, urging them to convince their parents.

A USA Today investigation found that in 2012, K12 spent $1 million on Nickelodeon and Cartoon Network advertisements, and $600,000 on teen social media sites. That year the company’s ad spending topped $20 million.

“They are paid by the number of people you get in the door,” Miron said. “They don’t care. They are reaching out like breakfast cereals to convince kids.”

Realizing many teachers were frustrated with the increasing numbers of students and amounts of paperwork, Bryant offered to gather teachers’ criticisms and present them to the directors of the high school program.

“All these good teachers were talking about leaving,” she said. “I was trying to make some headway, some kind of avenue to make some changes.”

CAVA management didn’t respond the way she expected. “They were nice about it,” Bryant said. “But they made it very clear—there was not going to be a line of communication.”

So the virtual educators began to organize with the California Teachers Association.

Terri Jackson, a district teacher in Northern California and CTA board member, was appalled when she heard about the conditions the virtual teachers were enduring, such as late-night calls from managers demanding work be completed by the following morning.

Many of the things these educators were demanding, she said, were things unionized district teachers already took for granted. “We admire that they are trying to protect their students and keep the public money in the classrooms,” Jackson said.

A majority of the 750 teachers signed unionization petitions, and the union filed with the state labor relations board in May.

Teachers report that management disciplined one union activist for raising concerns in a meeting, and terminated another. Managers also emailed employees urging them not to sign the petition, but Bryant said this didn’t have much sway with employees.

The employer rejects the organizing drive on legal grounds. It claims CAVA is actually 11 schools, not one statewide unit, and therefore the filing is invalid. Bryant dismisses that notion.

“The administration overlaps, the students overlap, the teachers,” she said. “We have one physics teacher for the state. That alone says we are one school. We function as single entity.”

Nonetheless, the boss’s main tactic has been legal delay. More than six months have passed since the state labor board certified that the CAVA teachers had majority support to join the CTA—but they’re still waiting for the board to get through all management’s appeals and recognize their union.

Turnover is a challenge. As time passes and workloads stay unmanageable, some teachers get fed up and quit. But activists are working hard to keep the group together and bring in more supporters.

Despite their growth, K12 and other online schools are facing a backlash, because their promises of student success have fallen short.

In Pennsylvania, the Agora Cyber Charter School severed ties with K12. Schools in Tennessee, and Colorado are canceling contracts as well. Florida’s department of education is investigating K12 for using uncertified teachers, and for misrepresenting how many students it serves while accepting per-pupil funds.

The publicly traded company’s stocks took a dive this year, as its enrollment numbers finally stagnated.

The problems now coming to a boil with K12 are indicative of what happens when education institutions are profit-driven, measuring their success in growth. It’s similar to in-person charter chains such as Rocketship Schools—but even more pronounced, because virtual schools are so much cheaper to start and operate.

The company gets paid by states and districts according to a per-pupil funding formula, similar to what charter schools receive—but can put the money into further expansion, corporate profits, and executive salaries, rather than into teachers.

One goal of the union effort is to clarify who really makes decisions. The educators suspect CAVA administrators are following K12’s orders.

“We want a better definition of the difference between ‘run by’ and ‘managed by,’” Hodge said. And to reign in the abuses, they want to add teachers to the decision-making structure.

Union supporters presented CAVA management with a letter bearing 100 teachers’ signatures, presenting their concerns about administrative tasks taking time out of the “virtual” classroom and away from students, and about the caseload for special education teachers.

By joining the CTA, they can also be part of a broader campaign around education standards statewide. They’ve met with California legislators, and reached out to North Carolina’s state board of education, to warn them of the dangers of opening online schools without proper oversight.

Until recently, states and districts have been greenlighting charter and online school growth with very little scrutiny. Charter school proponents claim they offer parents and students choices that are superior to public schools and more cost-effective.

Virtual teachers can testify that’s not true. They can play a role in strengthening the regulation of online schools.

And for unions, welcoming in educators like the CAVA teachers can help make the case that labor isn’t averse to new technology and innovation—but that the profit motive shouldn't be driving education policy.

This article has been corrected to reflect that K12 did not have their contract cancelled in North Carolina, rather the state is considering allowing the company to open an online school and CAVA teachers wrote not visited the North Carolina state legislature.

A version of this article appeared in Labor Notes #430, January 2015. Don't miss an issue, subscribe today.