Free-Speech Crackdowns Show Transit Workers Are on the Right Track 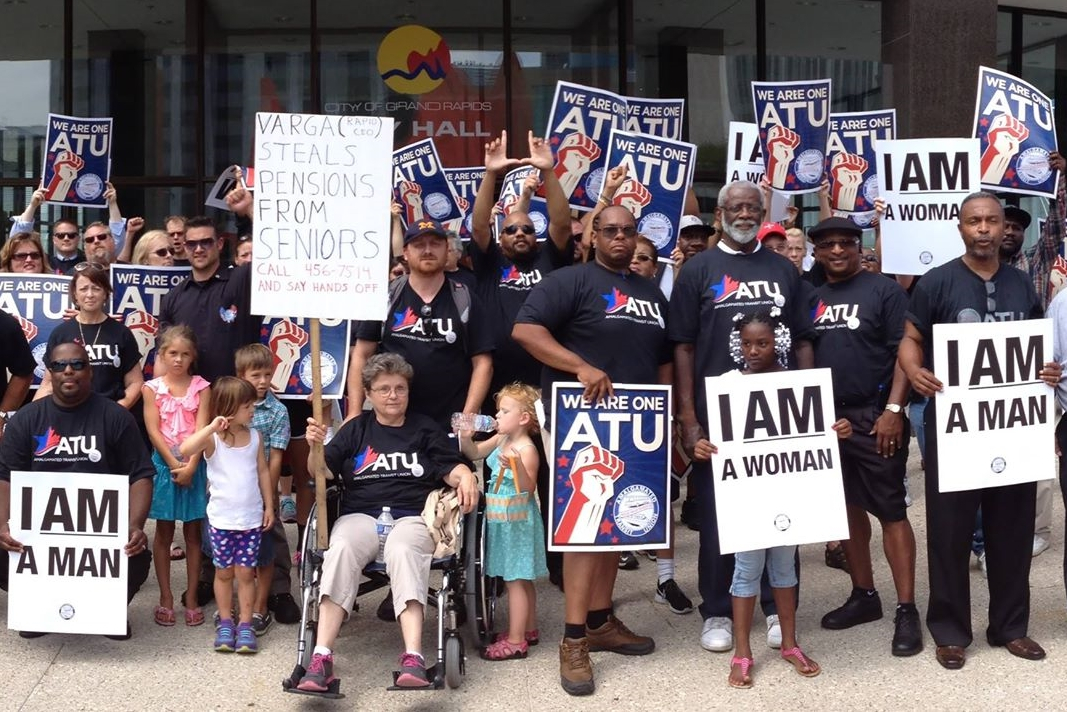 Even basic rights like free speech can’t be taken for granted, transit workers are finding out, when your speech makes the boss look bad. Photo: ATU Local 836

Even basic rights like free speech can’t be taken for granted, transit workers are finding out, when your speech makes the boss look bad.

Around the country, members of the Amalgamated Transit Union have been threatened with discipline and arrest simply for bringing their message to the public at bus stops, in breakrooms, at public meetings, and on social media.

As workers resist budget-crunching, ATU International President Larry Hanley said, “the companies are fighting back using the power of the police and the power of discharge.”

“They are doing that unlawfully,” he said. “It’s an abuse of power.”

Exhibit A is Grand Rapids, Michigan, where bus drivers campaigning to defend their pensions have faced a string of crackdowns.

Most recently, managers of the Interurban Transit Partnership (known as the “Rapid”) handed out a new social media policy that says workers can be fired for comments that could negatively impact the Rapid’s business interests.

“That is absolutely retaliatory, in my mind,” said Local 836 President RiChard Jackson.

The drivers have been in bargaining for six months. On the local’s Facebook page and their own profiles, members have been posting news about their contract campaign and commentary about management decisions.

The posts mirror themes the union’s been highlighting publicly: the 16 percent fare hike, the CEO’s $4,000 raise, and the agency’s push to gut pensions and switch to a 401(k)-style plan.

“The employer is obviously not happy about that,” said Jackson.

Can They Do That?

Transit workers are hardly pushing the envelope. Leafleting in a public place, for instance, is a well-established form of free speech. So why the recent crackdowns?

Rights are like muscles: exercise them or lose them. Bosses are seeing what they can get away with, despite the law.

Bosses are alarmed by something new. Many transit union locals have only recently done much public campaigning, as they seek to build alliances with riders.

It’s working. Bosses are feeling the heat from unions’ public activities. When you provoke a reaction, it’s usually a sign you’re on the right track. It can also boost members’ enthusiasm and confidence.

Know your stuff. Workers made clear to the public, the police, and their bosses that they weren’t campaigning on work time or in work areas. If you decide to push the legal limits, be prepared for bigger risks.

Bosses are like mushrooms—they thrive in the dark. Secret bargaining helps agencies mislead the public about contentious issues. When unions reach out to the public and talk openly about what’s at stake, they build trust.

When members leafleted at a transit hub this past summer, they were told they could be disciplined or arrested for it—though other groups had done the same activities with no problem.

After members disrupted a transit board meeting, the Rapid changed its public comment policy to ban criticism of its employees, including management. Then, after workers teamed up with college-student activists to stage a “die-in” at a city council meeting, a Rapid representative called the faculty advisor for United Students Against Sweatshops, trying to discourage student involvement in the campaign.

“I think it was an intimidation tactic,” student activist Lindsay Disler said, “but it didn’t work, obviously.”

After 10 members of the local’s “Rise and Shine Committee” protested outside the house of one transit agency board member and the law office of another, management dug up a decades-old city ordinance that made picketing in front of houses illegal.

Despite the threats, the local has kept up its public campaign. It’s also won two injunctions reinforcing members’ First Amendment right to leaflet at bus stops and protest outside houses, on public property.

What provoked management to try violating the Constitution? Jackson said it’s clearly “the fact that we are revealing to the public how they treat their employees.”

Grand Rapids transit workers aren’t the only ones taking heat.

ATU members in Atlanta last year were leafleting passengers at a train station—protesting a plan to privatize paratransit services—when 13 police officers surrounded the local president. The workers were told they’d be charged with criminal trespassing if they didn’t stop.

In St. Louis, security guards tried to halt transit workers from leafleting commuters at a major transit hub. The guards claimed leafleting was against the rules. Managers posted a bulletin forbidding workers to leaflet riders on Metro property, including at stations and garages.

“There are people handing stuff out all the time,” said Local 788 President Mike Breihan. “Nothing has ever been done to them.”

But he said it wasn’t surprising that Metro would object to these leaflets, which described CEO John Nations’s $75,000 raise and the agency’s efforts to cut pensions.

The leaflets, along with radio and newspaper ads, also expressed outrage over management’s racially offensive comments. In negotiations, transit authority representatives had passed out Oreo cookies recipes, implicitly calling union members “Oreos.” This weird provocation was part of a divide-and-conquer strategy: management was encouraging the mechanics, mostly white, to turn against the drivers, mostly African American, and leave the ATU.

Besides leafleting, the local demonstrated outside the CEO’s house and transit agency headquarters. All this outreach paid off, Breihan said: the union got more than 2,000 support cards signed. “The passengers, they were all for us.”

Last year the local finally won its six-year contract fight, settling a deal that protected the pension and kept drivers and mechanics united.

‘PRACTICE WHAT YOU PREACH’

Union activists were eagerly talking up the mayoral race with commuters and co-workers. Suddenly members were told they weren’t allowed to campaign in breakrooms, even on non-work time.

Transit agency President Forrest Claypool claimed the breakrooms were work areas—“training rooms.” That’s absurd, according to Carlos Acevedo, an officer in the bus local. Walk into any breakroom and “some are playing cards, some are playing dominoes.”

But it’s widely known in Chicago that Emanuel and Claypool have been friends for decades. (Emanuel has since moved Claypool to head the Chicago Public Schools.)

Some members feared retaliation, said Ken Franklin, president of the rail local. “We haven’t been so boisterous before,” he said.

But workers didn’t stop campaigning. “We kept doing what we were doing,” Acevedo said. “We kept hitting the breakrooms, and we were doing a lot of stuff at the rail stations.”

The icing on the cake, he said, was when the union pointed to photos of the mayor in a bus depot, campaigning for reelection.

“So you tell us we can’t do it in a non-work area, but you can go in an actual work area and campaign? Practice what you preach.”

Days before the election, a judge vindicated the unions with an injunction. Both Acevedo and Franklin said standing up to the transit head—and winning—was a union-building experience. “That was a great morale-booster,” Franklin said.

None of the locals we spoke with are relying on legal decisions to move their campaigns forward. But the injunctions, all being appealed, have helped reinforce to members and the public that they’re in the right.

Just as many teacher unions are emphasizing the need to work with parents, under Hanley’s leadership, ATU has prioritized alliances with riders.

He views this organizing as essential to fending off privatization and deregulation—and for winning decent pay and working conditions.

Hanley argues that riders and workers have a common interest in safe, reliable public transportation. That means saying no to false choices, such as between pension cuts and fare hikes, and yes to bigger budgets.

“The core mission is figuring out ways to organize our communities and our riders,” Hanley said. “In order to do this, you have to talk to them.”

The crackdown against public campaigns, he said, shows that transit authorities are feeling the pressure: “Many of these places we have been pushing have not been pushed in a while.”

One lesson is that when a tactic is working, it often provokes a reaction. For instance, Breihan said, the reaction in St. Louis was a sign that the local’s activities were hitting a nerve.

“When 2,500 people [the local membership] get together and start complaining, they don’t care about that,” he said.

“If you start going to county council meetings, and you have a bunch of alliances, unions, and everyone else, it’s no longer [only] 2,500 people,” Breihan said. “Then the companies start worrying.”