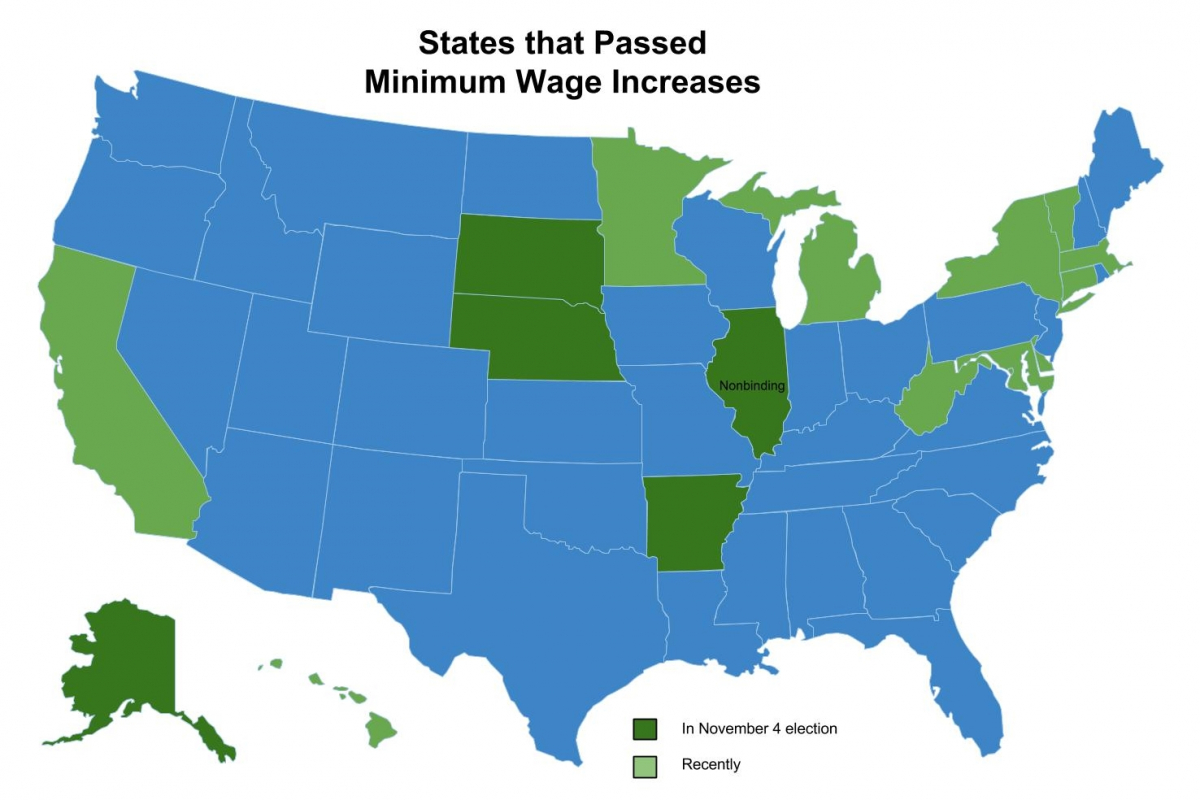 Midterm elections were mostly bad news for workers and unions, featuring gubernatorial, Senate, and House races where anti-worker Republicans won. But when voters saw working-class issues directly on the ballot, like raising the minimum wage or guaranteeing sick leave, they voted for them.

Voters in four traditionally conservative states passed statewide initiatives to raise the minimum wage. In Alaska, 69 percent of voters endorsed a raise in the wage floor to $9.75 by 2016.

In Nebraska 59 percent of voters supported going up to $9 an hour by 2016. The state senate had tied on the bill, so activists took it to the ballot.

Arkansas is actually below the federal minimum wage at $6.25, though the federal $7.25 minimum trumps that for most workers. There voters decided by 65 percent to boost the minimum 25 cents the first year, and get to $8.50 by 2017.

Illinois voters favored by 66 percent a bump in the minimum from $8.25 to $10 next year; however, the vote is nonbinding. Wisconsin voters in nine counties also supported a nonbinding question on raising the state minimum wage. In both states the results could be used to press legislators to act.

The largest increase (in line with Seattle) passed in San Francisco. It will phase in raises to $15 by 2018.

Voters in San Jose raised their minimum wage back in 2012. It’s now $10.15 an hour there, while the statewide minimum is still $9. The sky didn’t fall, despite what business groups said, and unemployment in San Jose did not rise—in fact, it dropped.

In Massachusetts, 60 percent of voters said yes to a paid sick leave measure. It requires business with 11 or more employees to offer part- and full-time workers 40 hours of paid sick time each year. Businesses with fewer employees must allow workers the same amount of sick leave, but it can be unpaid.

In Montclair and Trenton, New Jersey, voters endorsed giving food service, childcare, and home care workers paid sick leave, up to 40 hours per year, along with private-sector workers with large employers. Those working for small companies (10 or fewer employees) can earn up to 24 hours.

In addition to raising the minimum wage, Oakland voters endorsed workers earning five to nine sick leave days, depending on the size of the business where they work.

Connecticut and several cities have passed paid sick leave requirements in recent years, though some are riddled with exceptions. New York City’s paid sick leave law, which took effect this year, is one of the strongest.

In governors’ races, Wisconsin reelected Republican Scott Walker, known for spearheading the disastrous Act 10, which sparked a month of protests in 2011. Act 10 took away public sector collective bargaining and gutted funding for education and public services. His opponent, Mary Burke, had been critical of the anti-union legislation—but during her campaign committed to repeal only parts of it.

New York re-elected Andrew Cuomo, with the endorsement of the Working Families Party but not the state labor federation or the state teachers union. Public sector unions have been squeezed for four years by the Democratic governor, who has made tax cuts and pro-business measures his priorities. The governor, along with the state legislature, controls New York City union contracts, and can throttle the city’s ability to raise taxes to fund public programs.

Many teachers are particularly outraged at Cuomo’s support of charter schools instead of existing district schools—he even recently said he wants to break up the monopoly that is public education. So some voted instead for the Green Party candidates, Teamster Howie Hawkins for governor and teacher activist Brian Jones for lieutenant governor. Six teacher locals, including in Long Island and Buffalo, endorsed Hawkins and Jones, who won 5 percent of the vote.

In California, Democrats cruised to victory in top spots, but the California Teachers Association had made a big push in what would usually have been a smaller race, the state superintendent of public instruction, who carries out state board of education policies. Tom Torlackson, a veteran legislator and former teacher, beat out Marshall Tuck, a business executive and charter school operator.

At a pricetag of $30 million, this was the state’s most expensive race. Tuck had the backing of corporate education power brokers, including Walton, Gates, Broad, and Bloomberg. He promised to reign in the power of teachers unions, and made weakening teachers’ job security his signature campaign issue.

And in Richmond, California, where Chevron operates a giant refinery, the oil company poured $3 million into an effort to defeat a slate of pro-worker community activists with the Richmond Progressive Alliance.

The RPA has been fighting to stop foreclosures and to get compensation from Chevron for endangering workers and sickening residents in a 2012 explosion. The Chevron-backed mayoral candidate, on the other hand, said in a forum that if he were elected, the first thing he would do would be to go to Chevron and ask the company what it wanted. Chevron's chosen candidates were also endorsed by the local Democratic organization.

But despite Chevron’s flood of cash, the three RPA candidates swept the city council, and an ally won the mayor’s race.

Samantha Winslow is co-director of Labor Notes.samantha@labornotes.org
Related
Auto Workers Win Direct Democracy in Referendum »
We Need Democracy on the Job and in the Union, Too »
2020 in Review: Workers Struggle Under the Weight of the Pandemic »
Why Did California's Tax the Rich Measure Lose? »
Viewpoint: This Election Shows Labor's Ground Game Matters (Especially During a Pandemic) »