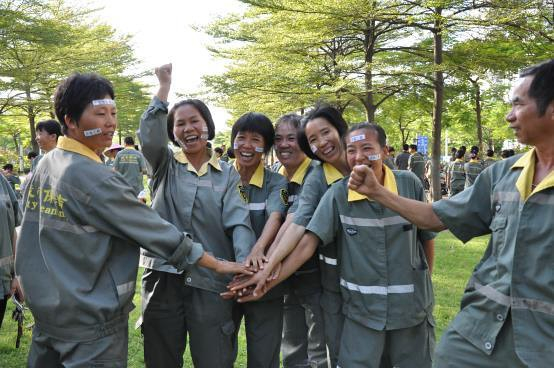 As basic services get privatized, there's a rising tide of sanitation worker strikes in the Pearl River Delta. But this one was unusual: the striking workers are mostly former villagers, displaced from their homes here a decade ago when the university "Mega Center" took over the island. Photo: Zheng Churan.

For two weeks, sanitation workers gathered daily on the lawns of Guangzhou’s Higher Education Mega Center—a complex of ten universities serving 200,000 students that has taken over Xiaoguwei island—in the latest of a series of Guangzhou sanitation strikes.

The strike erupted August 26 after the sudden replacement of a contractor jeopardized the jobs of 212 sanitation workers, jobs many had held for a decade.

By the time it came to an end September 9, workers had won an agreement that included severance pay of 3,000 yuan (about $489 U.S.) per year of service.

Tensions are still simmering over whether the new company will rehire all veteran workers as promised. But although the dispute isn’t settled yet, its significance is clear.

This strike, a symptom of the increasing privatization of basic urban services, sets a promising precedent for solidarity between locals and migrants, for women workers' leadership, and for student-worker collaboration.

The sanitation strike at the Higher Education Mega Center is part of a rising tide of sanitation worker strikes in the Pearl River Delta. Since 2008, such strikes have affected almost every major district of the city of Guangzhou, as sanitation work has been gradually contracted out to the lowest bidder.

Workers at the Mega Center were first hired by the city in 2004. The next year they were transferred to GrounDey Property Management. Although state-owned, GrounDey acts as a contractor, competing to underbid other public or private contractors for the work.

Workers faced two unappealing options: stick with GrounDey and be forced to move to far-flung work locations away from their families, or sign with the new company, forfeiting hard-earned seniority pay, benefits, and the right to an unlimited-term contract. (After 10 years continuous employment at a company, China’s labor law entitles workers to unlimited-term contracts, where if you’re ever laid off or fired, you’re entitled to severance pay.)

Documents uncovered during the struggle show that the Xiaoguwei subdistrict government originally budgeted for 426 sanitation workers. Now the complex employs just 212. Somewhere between 70 and 100 million yuan ($11-16 million U.S.) that was budgeted for sanitation work 2004-2010 is unaccounted for.

This is typical in the new subcontracting system of urban services. Sanitation contractors will provide as few as half the workers specified in their contracts, and intensify work such that workers can barely finish in time. This is so common that there’s an industry term for the money made this way: “extension fees” (拉长费 or lachangfei).

Sanitation is a strategic place for labor struggle. It’s fundamental to basic urban functioning. In China, desirable “clean” factory jobs, such as in electronics, tend to employ young workers who often change jobs, while “dirty” industries such as sanitation work tend to be left to older workers. These workers have fewer employment opportunities, and are under pressure to stay employed in order to earn their retirement pensions.

Sanitation therefore employs a much more stable workforce than light manufacturing or commercial service industries. It’s not the type of work that can be moved to lower-wage areas, and its workers are more likely than young factory workers to stick to their jobs and fight over the long term for better conditions.

The government sent in scabs. Workers gathered daily on the lawns outside the subdistrict government office, waiting for company, union, and government representatives to show up for negotiations.

Talks began September 2, but at first stalled over who would sit at the table. The workers had elected 18 representatives, but the company and the government would only allow five.

A Panyu District union representative was the only union presence at the negotiations, and beyond offering a few words, had little involvement in the negotiation process. Though the sanitation workers are supposedly represented by an enterprise union—a branch of the All-China Federation of Trade Unions, the only legal union in China—the hollowness of such official unions becomes obvious in real labor disputes such as this one.

Staff from the Panyu Workers’ Center, who had been giving the workers legal counsel, also sought to participate in the negotiations, and eventually were able to send two representatives.

The company backed out after the first round of negotiations. The government represented the employing party for the rest of the talks.

EVICTED BY POLICE AND DOGS

These workers have a strong basis for holding together. Most have been here since the complex opened a decade ago, and known each other even longer—since 90 percent are locals of the island, whose homes were taken to build the Mega Center.

Xiaoguwei, the island on which the complex was built, was originally a rural area of 13 villages. The city annexed it in 2003 to build the university complex. The city took land by force from resistant villagers, deploying police and dogs to chase them out.

Unlike local landholders in some more visible parts of the Pearl River Delta, villagers on this isolated island were given only meager compensation, not nearly enough to buy new homes with rapidly rising costs on the island. Many villagers were left living with friends or relatives.

The villagers fought to be able to stay and make a livelihood. After a trip to petition in Beijing, they won jobs as sanitation workers in the higher education complex. With their meager wages, many are still struggling to pay for housing ten years later.

As locals, most of the sanitation workers share a common dialect of rurally inflected Cantonese, and common memories of their violent eviction. A supporter who visited the scene of the strike recalls how workers automatically formed a tight circle of protection around her when the police tried to take her away. Workers already had a mistrust of the authorities and sense of how to resist together.

When the job loss came along, one worker reported, the decision to strike came quickly. As they rallied in front of the government office with their demands, someone brought up the idea, and the group soon found itself in agreement.

As landholders, the Xiaoguwei villagers existed in a strange pocket—an undeveloped island right next to one of South China’s largest and most prosperous cities.

Most former villagers so close to Guangzhou have benefited from the city’s rapid rise. When slum-like “urban villages” around the city are seized for development, the primary victims are usually the migrants who live there now. Locals long ago made enough money, as landlords or by getting into business early, to move to better areas.

But the locals of Xiaoguwei, isolated on their island, were less fortunate. The island’s sudden, massive development left most of these locals no better off than poor migrant workers coming to the city from less wealthy regions of the country.

Many of China’s millions of migrant workers are abused both as landowners and as employees. But they tend to experience the two events separated by long distances, and as members of different communities. These sanitation workers went through their land grab and work exploitation in the same place—with deep social bonds still intact.

LOCALS AND MIGRANTS TOGETHER

Local identity has clearly been a basis for solidarity. Yet the strike also demonstrated impressive solidarity between local and migrant sanitation workers. This has a lot to do with the workers’ long history together—something less often seen in the highly flexible manufacturing industry, but common in sanitation.

The 10 percent who are migrants have been active members of the strike. In fact, half the workers’ representatives at the negotiating table were non-locals.

The two groups have stood together in their demands. Early in the strike, the sanitation workers specifically agitated for make-up social security payments for migrants. Throughout their service the company had been paying social insurance for local workers, but denying migrants this basic and legally mandated benefit. This was among the demands they finally won.

Workers also demonstrated unity at the end of the strike when the new contractor offered locals immediate work for a 30-day “assessment period,” while non-locals were told to wait. The workers resisted, refusing to be split between local and non-local workers, and aware that an “assessment period” would give the company a chance to target key organizers.

Workers returned to work September 12, after the company retracted its earlier statements and promised all workers they would be rehired. This brought a lull in the conflict.

However, the conflict won’t be over until contracts are signed with the new company. This was supposed to happen September 15. As of October 7, nearly a month later, contracts still hadn’t been signed. The workers and their supporters remain on guard.

Meanwhile, following in the sanitation workers’ footsteps, university cafeteria workers just concluded their own brief strike over a parallel situation.

While it is common to see women on strike in China, it is rare to see such strong and visible female leadership. Xiaoguwei’s sanitation workers are 80 percent female, and of the men who work there, quite a few are married to women who work there too.

All 18 representatives initially elected by the workers were women. It was only because the women decided they needed at least one male representative that two men were chosen to be part of the group. Of the five who ended up at the negotiating table, one was male.

Zheng, a gender issues advocate and supporter of the strike, noted how women took the leadership role without hesitation. She witnessed several men declining the role of representative—and a woman leader declaring that if the men would not help, the women would go themselves.

It’s been a long time, perhaps a century, since students played such a significant role in a strike in China.

A small group of students was heavily involved, going to the workers’ demonstrations daily to chat and sing with workers, bring food and water, monitor and report on the struggle, and generally boost morale.

Several hundred more students, locally and at universities in other cities, expressed support for the strike. After the news spread through student networks, an open letter in support of the workers was signed by more than 1,000 students at various universities, both in and outside the Mega Center.

Though the students involved were only a tiny proportion of the 200,000 who study on the island, they set a precedent for student-worker collaboration in future struggles.

This is especially important because China is experiencing degree inflation and declining post-graduation prospects. The average wage for new university graduates is now not much higher than that of a typical factory worker. Being a student no longer sets you far apart from the working class, and these two important groups are starting to collide and coincide in their discontents.

The results of this strike look like a defensive victory. But the precise gains are not as important as the experience of organizing and collaboration between locals and non-locals, and between students and workers.