Got Unfair Labor Practices? Put ’em to Use 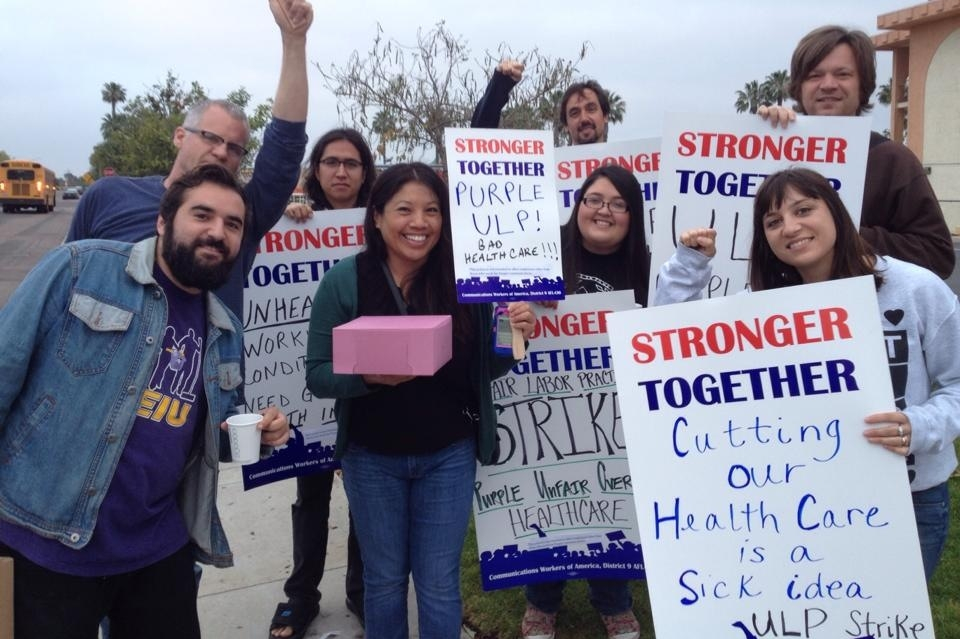 These striking sign language interpreters are communicating not just that theirs is an unfair labor practice strike, but the nature of the ULP—health care cuts. It’s helpful to specify the ULP on signs and fliers. Photo: SEIU.

Employer unfair labor practices (ULPs) are violations of worker and union rights under the National Labor Relations Act (NLRA) and similar public sector collective bargaining laws. For many unions, they are a familiar experience.

Some, however, have discovered that a ULP can be a gift in disguise, providing a defense against the most dangerous employer weapons. A union that plays its cards right can use ULPs to help win contract campaigns, strikes, and other confrontations.

Risks are always present during union struggles. But the following scenarios are particularly threatening:

Union solidarity can eventually beat back these attacks, but some workers may lose their jobs and the union may be forced to sign a concessionary contract. Is there a way to prevent the employer from using these weapons in the first place?

In the case of a final offer, an employer is not allowed to declare impasse and implement proposals if it has committed a ULP that affects the union’s ability to carry out effective negotiations.

In the case of permanent replacements, the NLRB classifies a walkout as a “ULP strike” if it is caused in whole or in part by an employer unfair labor practice. During a ULP strike, the employer cannot replace strikers on a permanent basis. If the employer disregards the law, the NLRB can order it to reinstate strikers with back pay.

Finally, an employer is not allowed to lock out workers if it commits a ULP that delays resolution of the underlying labor dispute.

The above rules explain why a union’s position is always stronger when the employer commits a ULP in the course of negotiations or a strike. Some employers make it easy by disciplining union officers, insisting on non-mandatory subjects, or engaging in other illegal behavior.

Savvy employers, however, take care to avoid ULPs during the bargaining process. In these cases, the union should consider a proactive approach which may provoke the employer into actions that violate the NLRA. The union will be able to cite these infractions in the event that the employer implements its final offer, hires permanent replacements, or declares a lockout. The more ULPs, the better.

There are many ways to provoke ULPs. One method is to carry out a militant on-the-job contract campaign, which the union should be doing anyway.

Holding rallies on parking lots, steps, walkways, and other nonworking areas of the employer’s property is protected by the NLRA. The employer may respond by issuing warnings, ordering workers to disperse, calling the police, or taking photographs—all ULPs.

Informational picketing before and after work can also provoke illegal warnings, threats, discipline, restrictions, and surveillance.

Employers frequently commit ULPs when the union submits requests for information needed to formulate bargaining proposals or respond to employer arguments. Requests for sensitive records or data on customers and non-bargaining-unit employees are likely to be denied.

Total or partial refusals are ULPs which can be cited when filing charges against final-offer implementations and lockouts. If it concerns a matter of importance to bargaining, a refusal to furnish information can serve as a basis for calling a ULP strike.

To formulate proposals on subcontracting the union can ask for the names of all outside companies doing bargaining-unit work for the employer, copies of contracts, the work hours involved, labor costs, and correspondence between the parties.

If the employer says higher medical expenses require it to reduce coverage or increase copays, ask for the claims history of plan members outside the bargaining unit, including managers and officers. After all, they may be the ones responsible for the rise in expenses.

If the employer says it needs wage or benefit concessions to avoid losing customers, ask for the customers’ names and tell the employer that you will be contacting them to find out if they are contemplating a change.

If the employer says it needs to keep costs from rising, ask whether it has awarded any raises or benefit increases to managers, and, if so, the amounts.

If the employer says it cannot afford the union’s demands, ask for the company’s financial records, including tax returns and salary schedules for managers and officers.

Another card the union can play: letting the contract expire while remaining on the job.

Contract expiration nullifies any management rights language in the collective bargaining agreement. This prevents the employer from claiming that the contract allows it to make unilateral changes in day-to-day matters such as schedules, assignments, supervisory methods, work rules, and safety policies.

If the employer makes unilateral changes as it is accustomed to, the union will be able to file a slew of ULP charges. These will turn to gold if the employer declares impasse or a lockout or the union votes to go on strike.

Employers with knowledgeable lawyers attempt to settle ULPs before the contract expires. Do not cooperate.

Insist that the employer completely repudiate its illegal conduct and post a notice admitting it violated the NLRA. If the National Labor Relations Board says it will settle without union approval, ask that it include language in the settlement reserving the agency’s right to cite the ULP in future proceedings.

Keep one or more ULPs in the union’s pocket in the event the NLRB settles or dismisses the initial charges.

The union must do more than simply identify wrongdoing or file meritorious ULP charges. It must also make a convincing claim that the ULP had an adverse impact on bargaining or was a factor in the union’s decision to begin or continue a strike.

The union will be in a stronger position if it consistently refers to the ULPs during bargaining and when it communicates with its members, the press, and the community. Picket signs and handbills should describe the violations.

If the membership takes a vote on a strike, the ballot should ask: “Do you vote yes because of the employer’s unfair labor practices?”

Robert M. Schwartz is a retired labor lawyer. This article is drawn from his recently published handbook, No Contract, No Peace! A Legal Guide to Contract Campaigns, Strikes, and Lockouts. Several of his books are available at the Labor Notes online store.

A version of this article appeared in Labor Notes #428, November 2014. Don't miss an issue, subscribe today.
Related
Management Rights: A Pitfall When Negotiating Your First Contract »
Viewpoints: How Academic Workers’ Leverage Can Grow in a Long-Haul Strike »
Every Union Contract Right Now Should Be the Best Ever »
Could We See a Rail Strike? »
Undaunted by Fines, Massachusetts Teachers Defy Strike Ban »