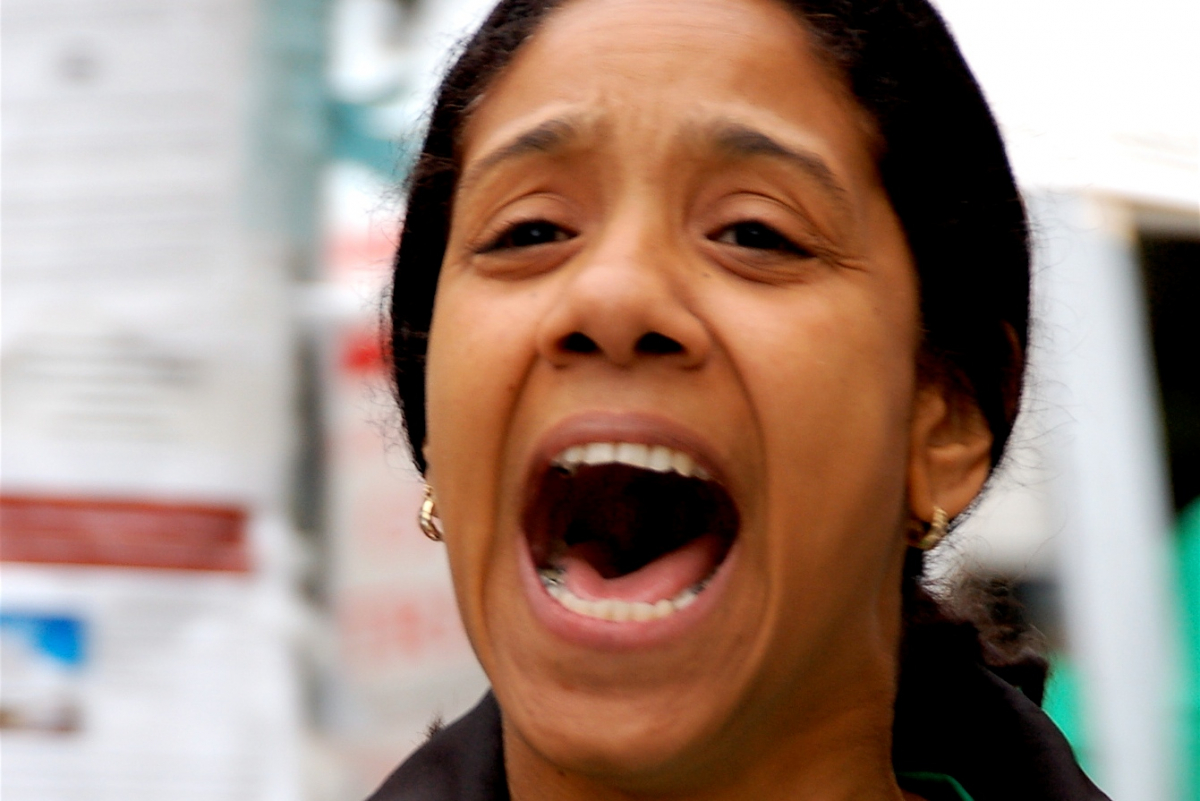 Chants are the most basic form of union culture. Not everybody can write a song, but just about anyone can write a chant, with a little preparation. Photo: Brooke Lee Anderson.

It was April 1992, and my union, Service Employees (SEIU) Local 503, was rallying at Oregon’s Capitol steps. Our point was to gently urge the Democratic governor to move forward on tax reform.

But when staffers passed out the chant sheets and people started in on “Barbara Roberts, cheap and mean,” we had a problem.

Some hurried organizer had cribbed this chant off a flyer from our 1987 strike. It went to the tune of the nursery rhyme “Frère Jacques,” and the organizer had simply replaced a hated spokesperson’s name with Governor Roberts’s.

“You watch,” I said to the person next to me. “That chant is going to be the lead in the newspaper tomorrow.” And it was. Not exactly the message we wanted to convey.

Good chants matter. They’re sound bites, which is what the media seeks, so if you get them right, they can really get your message across.

And when chants work, they express and embody collective power—so they help make the action work, too.

Fast forward to 2005. Our contract with the state was expiring, and we were marching into the Department of Administrative Services (DAS). This time the chant, directed at spokesperson Eva Corbin, went, “Hey, Eva, it’s gotten late. It’s time for you to negotiate.”

Too many syllables. Folks couldn’t figure out how it was supposed to go. People in front were saying it one way, and people in back another. The word “gotten” turned everyone into a mush-mouth.

The result: you couldn’t understand what anybody was saying.

Now turn the clock back to 1997. Same scene, but with a great chant. We were calling on DAS Director Jon Yunker to come out of his third-floor office and face the members.

“Hey, Yunker, come out of your bunker!” we yelled in deafening unison. Now that was a good action.

Chants are the most basic form of union culture. Not everybody can write a song, but just about anyone can write a chant, with a little preparation.

So involve your stewards or bargaining team in a “chant brainstorming” session. Activists are sure to have some good ideas for chants, and can check whether the ones you have will resonate with members.

At the action, pass out a chant sheet, so people know what they’re supposed to say. It’s awkward when the leader says, “What do we want?” and some people say “contract!” and others say “justice!”

Keep it simple. To be “chant-able,” chants need to “roll off your tongue.”

Also, it needs to be clear to someone looking at the printed page how the rhythm is supposed to go. If you’re Bruce Springsteen, you can squeeze in a few extra syllables, but not the rest of us mortals.

“On strike, shut ’em down! San Francisco is a union town!” is easy to say. And nobody reading it could have any doubt how to say it.

Avoid monotony. You need at least four or five chants to keep it from getting boring.

Recycling the same old chants is also boring. Come up with something new and specific to your action. People will appreciate it.

Including the name of your favorite villain allows people to vent their anger and ramps up the energy. In 2007 we targeted that year’s DAS director: “Lindsey Ball, hear our call/Two percent is way too small!”

Fun is good. In 2003 bargaining with the Oregon University System, after management declared impasse, a few hundred of us marched through a building chanting “Impasse! My ass!” That was tons of fun. And very powerful.

If your chant is more than two lines long, do it as a call-and-response. Print the leader’s lines in bold and the group’s in regular type.

Chants like “Union busting? That’s disgusting!” “No justice? No peace!” and “Are you ready to fight? Damn right!” work well with the leader asking and the group answering.

Probably our favorite at Local 503 is “You take one of us on, you take all of us on!” The “one” leader and “all of us” responding acts out the meaning of the chant.

Do some simple musical chants. “We are the union, the mighty mighty union…” works because the tune makes it interesting. Ditto the Marine Cadence.

For something more contemporary, we’ve changed the chorus of “We Will Rock You” to “We Are Home Care,” and the chorus of Aretha Franklin’s “Chain of Fools” to “Shame on You.”

Don’t get too clever. Too complicated won’t work.

In 1996, I called out two management spokespeople: “Listen up, Joe, listen up Candace!/We’re not buyin’ the stuff you hand us!/Listen up, Candace, listen up, Joe!/Your takebacks have got to go!”

I thought this was clever and catchy, but it was too long and people couldn’t figure out how it was supposed to go.

But when I tried it with a group of state workers, they weren’t comfortable using the s-word on a public street.

Road-test your chants with a small group. You should be able to tell pretty quickly whether they’re going to work. If someone had tested “Hey Eva” and adjusted it a little, we would’ve had a better rally.

Make sure your chants are on message. In 2009 bargaining we promoted a “Health Care for All” message to show we weren’t just out for ourselves.

The chant we used most was “Hold the line for health care, hold the line for all!” People liked the chant—it made them feel part of a broader fight. And in combination with picket signs trumpeting “Health Care for All,” it helped get our message across. “Be fair to those who care!” is another positive one for care providers.

In recent bargaining we’ve introduced “Classified workers at Oregon State/Help to make this campus great!” A little less militant than “Impasse! My ass!” but something everybody can get behind.

Remember, your chant could show up in the next day’s paper. So don’t leave chants to chance.

Paul McKenna is research director of SEIU Local 503 in Oregon. He has written close to 300 labor and political songs, mostly parodies or “borrowed tunes,” and is working on a CD. He can be reached at mckennap[at]seiu503[dot]org.