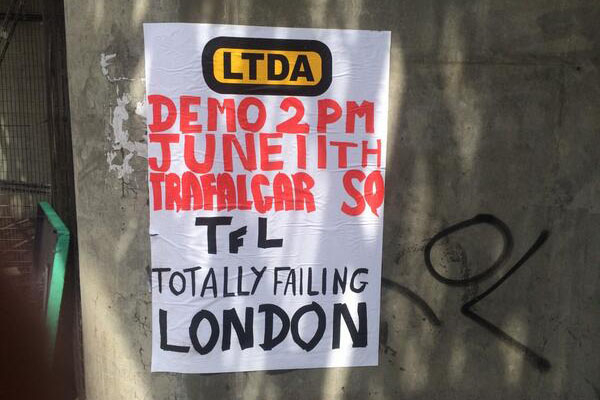 Thousands of drivers plan to gridlock the streets of London. They're angry that "rideshare” companies are leapfrogging regulations as they roll into cities. Photo: London Taxi Drivers Association.

Tomorrow afternoon, thousands of taxi drivers plan to gridlock the streets of London.

Drivers in Boston held a “rolling rally” last month, slowing traffic in the city’s center. Taxi rallies have popped up in San Francisco, Cincinnati, and Seattle, too.

The reason? Uber: one of the most successful of the new “rideshare” companies setting down roots in cities across the U.S. and Europe.

These companies pride themselves on “disrupting” the taxi industry. Or to put it another way, “it’s making a full-time job into precarious labor,” said San Francisco Cab Drivers Association President Barry Korengold. And drivers say Uber and its ilk are pushing dangerous deregulation.

Here’s how it works: Rather than hailing a cab or calling a dispatcher, an Uber customer requests a ride through an app on her phone. A driver is notified, picks up the customer, and takes her to the desired location.

Payment is issued through a credit card the rider registers with the app. Uber takes 20 percent of the fare. Upon arrival, the passenger and driver each use the app to rank one another.

Under the guise of a progressive-minded “sharing economy,” rich companies like Uber, Airbnb, and Taskrabbit are dissecting work into smaller, discrete tasks—a way to evade regulations that once protected workers, and to saddle workers with costs and risks that employers once covered.

Driving a taxi isn’t easy work. Already, drivers must pay for insurance, gas, and car rental fees. They go through training and follow laws that dictate where and when they can pick people up and how much they can charge passengers. One study found that, after expenses, drivers in Chicago netted an average $4.38 an hour—leading 75 percent of them to spend over 12 hours a day driving.

After 20 years driving a yellow cab in San Diego, last December Abduhamid Somo switched to driving a black Lincoln towncar for Uber. He rented the car from a friend. (Uber drivers are on their own to find vehicles—unlike taxi drivers, who generally lease them from cab companies.)

Many taxi drivers have made this switch, drawn in by Uber’s promise of more freedom and higher pay. In some cities, Uber has started by offering drivers great money-earning deals, along with free phones to use the service—only to start charging them once drivers are dependent on the income.

But six months later, Somo returned to the yellow cab: he was losing money. The out-of-pocket costs of renting the car, gas, and Uber’s 20 percent cut—plus a lack of work due to competition with lower-cost drivers through an even more precarious branch of the company, UberX—were enough to leave him in the red every week.

Uber’s rating system is another sticking point for drivers. After every ride, a rider is required to rate her driver between one and five stars. The ratings are averaged. If a driver’s rating drops below 4.7, he or she is fired.

In San Diego, some taxi drivers have taken out loans to buy or lease personal cars and become Uber drivers—“then Uber shuts them down for low rating,” said Sarah Saez, program director at United Taxi Workers of San Diego.

Often low ratings are given when passengers are intoxicated, she said. One driver was given a low rating because the passenger felt he was wearing too much cologne.

UberX is the cheapest—and most controversial—option Uber’s customers can pick.

Like Lyft, another popular rideshare app, UberX drivers have regular driver’s licenses, not commercial ones, and they pick up passengers in their personal vehicles. These drivers skip the extensive (and expensive) regulations on taxi drivers.

Unlicensed drivers are not a new phenomenon in the taxi world. What’s new is their acceptance. “When a guy is scrambling to make a business of it… it’s illegal. When Uber does it, it’s suddenly an innovative business model,” said Matthews.

There’s a reason for those regulations. “You need professional drivers,” Matthews argues, “drivers who know the city, drivers who know how to deal with customers.” The regulations also mandate that drivers have insurance that protects drivers and passengers.

Uber boasts $1 million in insurance liability coverage for drivers. But accidents have left drivers surprised to find themselves without insurance coverage—because their app wasn’t open at that moment or they had not yet picked up a customer.

Commercial insurance covers conventional taxi drivers the whole time they’re on the job, including while cruising around looking for passengers. Not so for UberX drivers, who aren’t considered to be working for Uber between rides. But their personal insurance may not cover them either—because they’re working.

“The liability is so low for Uber,” Saez said. “The driver takes all the risk.”

San Diego drivers haven’t decided how best to relate to the more formal version of Uber, where commercially licensed black cars and traditional taxis use the app in place of a dispatcher. “The taxi industry needs to be fixed,” said Saez, “but we don’t necessarily think Uber is the answer.”

Their views on cars that don’t follow any regulations, though, couldn’t be clearer: “UberX and Lyft just should not exist,” she said.


Many driver associations are targeting their local governments, which have the power to hold these companies to the same regulatory standards as taxis.

“Our problem is not with Uber, it’s with the TFL [Transport for London, the city’s transportation regulatory body],” said LTDA Vice Chair Anthony Street.

Some accuse regulatory bodies of shying away because of Uber’s big funders: Goldman Sachs, Google, and Amazon owner Jeff Bezos.

“We’re regulated within an inch of our lives,” said Baldwin. “The difference with Uber is that they’re funded with multi-billion pound companies.”

That’s why, he said, they’ve been granted “carte blanche to do whatever they want.”

The LTDA’s 11,000 members have used the gridlock tactic before. Earlier this year drivers shut down traffic surrounding a new building downtown that refused to set up a taxi stand. Two days later their demands were met.

“We had more of a crowd than I expected we were going to get,” said Donna Blythe-Shaw, a staffer at the Steelworkers union, which organized the Boston Taxi Drivers Alliance in 2007. She was happily surprised when 300 cabs rolled up, shutting down traffic.

The rally aimed to draw the attention of the mayor and police commissioner, who have the power to regulate UberX in Boston. “Our initial goal is to get them [Uber] out of the city,” says Blythe-Shaw, but if that’s not possible, “we want a level playing field”: everyone following the same regulations.

“If I tried to do what Uber does, the city would shut me down in two seconds flat because I’m not a corporation,” said Arthur Rose, who’s driven a taxi in Boston for 40 years.

When Uber first appeared in Boston, the police commissioner was sympathetic to taxi drivers’ argument that it should be just as regulated as taxis are, Rose said. But Uber lobbied state officials, who came out in favor of the company and pressured Boston officials to follow suit.

It’s the same story in San Francisco, where many rideshare apps started: Uber leapfrogged over city regulations by reaching out to the California Public Utilities Commission, which granted permission for the service. Though legal challenges to “rideshare” continue, already there are two or three times more rideshare drivers than taxi drivers, said Korengold.

“This is deregulation on steroids,” Matthews said, adding “that’s what you’re seeing in every industry.”

Where’s this all leading? You can get a hint from Uber CEO Travis Kalanick’s excited reaction when Google premiered its self-driving car last month. “The reason Uber could be expensive is because you’re not just paying for the car—you’re paying for the other dude in the car,” said Kalanick.

Asked how he would respond to the many drivers who’d be put out of work by self-driving vehicles, he said, “I’d say ‘Look, this is the way of the world, and the world isn’t always great.’”