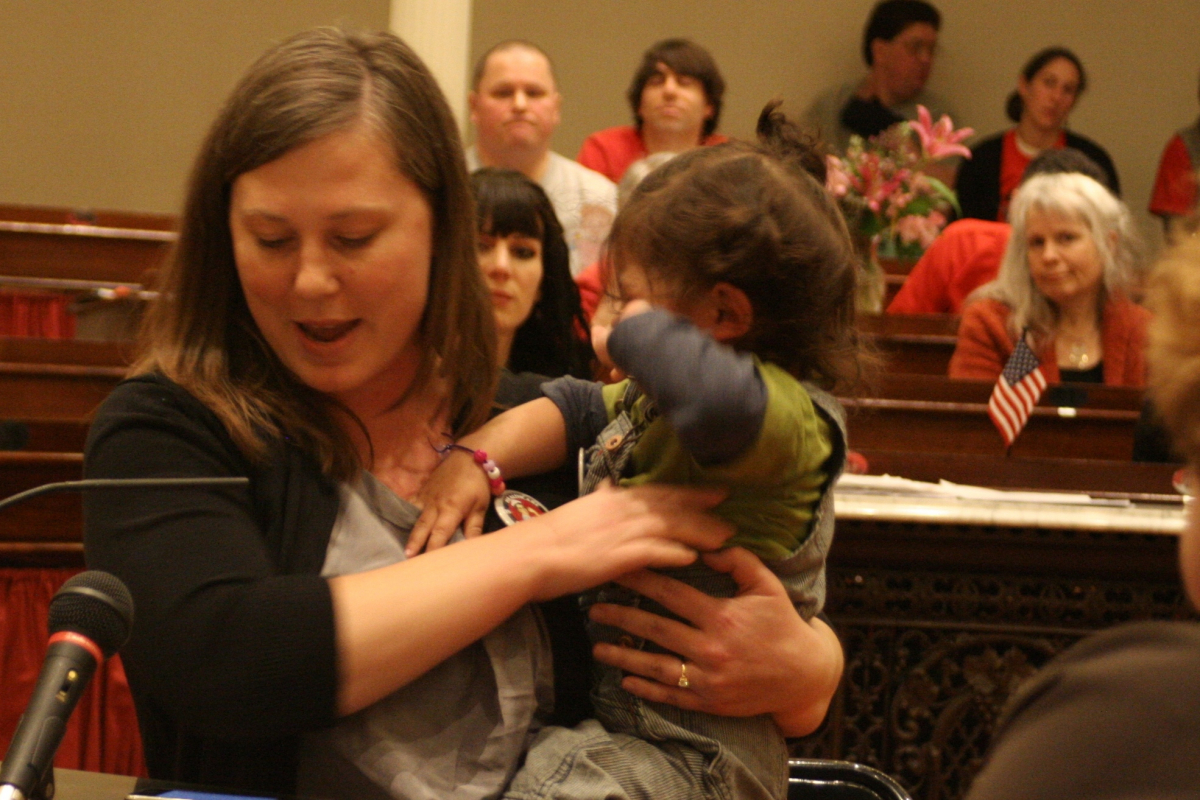 A Vermonter testified at a state senate hearing on universal health care. “Our most powerful organizing tool was to get people to tell their own stories about the injustices of the for-profit health care system,” one organizer said. Photo: Vermont Workers Center.

Following the lead of tiny Vermont, advocates of Medicare for All are developing state campaigns to win health care that eliminates insurance companies and covers everyone.

Beginning in 2017, the Affordable Care Act, or Obamacare, allows the federal government to grant a waiver to any state that wants to introduce “innovations”—provided the coverage is at least as comprehensive, extensive, and affordable as coverage under the ACA.

Since a “single-payer”-style state system would easily meet those criteria, activists are hoping for a path forward state by state.

Medicare, the government plan for those 65 and over, is “single-payer” because all care is paid out of one public fund, which keeps overhead down to 3 percent. By contrast, private insurance drains 10 to 30 percent of health care dollars.

While state single-payer systems couldn’t capture all the efficiencies that a national Medicare for All system would, a well-constructed state plan could come pretty close. And it would be “everybody in, nobody out.”

The win came only after “25 years of legislative bills didn’t work,” said Amanda Sheppard, a board member of the Vermont Workers Center and a union home care worker. So instead of pinning their hopes on lobbying, activists focused on building a grassroots coalition with strong labor support.

Vermonters held scores of town meetings to educate and create a groundswell. When residents testified to the legislature, “our most powerful organizing tool was to get people to tell their own stories about the injustices of the for-profit health care system,” Sheppard said.

Health care activists protested the meeting of the Republican Governors Association in New York on May 20, saying, “We found the real death panel.”

Republican governors and legislatures have blocked the expansion of Medicaid in almost half the states, even though federal Obamacare funds would pay for it. Experts estimate that 5 million people have been excluded from coverage as a result.

Lack of health care access kills 26,000 a year in the U.S., according to Families USA.

This organizing approach came in handy when a legislative compromise sought to exclude undocumented immigrants from coverage. Thousands converged on the statehouse on short notice, and the provision was dropped.

Sheppard said the future of Green Mountain Care, which is still far from being implemented, depends on this labor-community coalition. Advocates are grappling with complex financing issues, and national corporate interests are pouring millions into the state to undermine the program.

Meanwhile, nearby, “we’re following the path blazed by our brothers and sisters in Vermont,” said Maine AFL-CIO President Don Berry.

A majority of Maine’s legislature supports single-payer legislation. Although anti-labor Governor Paul LePage is blocking all reform initiatives, health care advocates hope to pitch him out in November.

Labor has allied with the Maine People’s Alliance, physicians, and other community and faith groups in a campaign to emphasize, as Vermonters did, that health care is a fundamental human right.

Advocates are turning to state campaigns partly because the political climate in Washington, D.C. has made imminent progress on a federal Medicare for All bill “inconceivable,” according to one long-time activist.

The practicality of single-payer shouldn’t even be up for debate. Maintaining thousands of profitable insurance companies as paper-pushing gatekeepers is unbearably expensive.

Worse, they have a toxic business model: the more health care they deny, the more money they make. If money from premiums were diverted to care, there’d be plenty of care to go around—for the same price we’re paying now.

But insurance companies would need to be euthanized. Naturally, they spend lots of money to defeat any such effort. Even in Vermont, which has only one private insurance company, a fierce battle is underway over the law’s implementation.

Negative aspects of Obamacare have also knocked state organizing into gear. The messy rollout of the “exchange” in Oregon has left many looking for a simpler system, said Lee Mercer, a board member of Health Care for All Oregon.

The coalition is hosting town meetings, talks by experts, and film showings all over Oregon, including conservative rural areas, Mercer said. The “Health Care Movie” is a popular draw. If they have enough momentum, volunteers, and money, he said, they may place a referendum on the 2016 ballot.

The Oregon coalition has 800 affiliates, including dozens of chapters around the state and many big unions: AFSCME, the Communications Workers, both teachers unions, the state’s two Service Employees locals, Teamsters.

Building trades have been less enthusiastic so far, Mercer said, though nationally construction workers have shown plenty of interest in single-payer.

The Plumbers and Pipefitters (UA) have repeatedly affirmed support for Congressman John Conyers’ federal Medicare for All bill. A Canadian member testified at the union’s convention in 2011, commending Canada’s single-payer system.

Getting a heart valve replaced, said delegate John McKnight, “cost me zero. But as a Canadian citizen, it did cost me through the income tax system of our country. Taxation can be a very good thing, and it gave us health care.”

Obamacare is driving many unions up the wall with its mistreatment of Taft-Hartley plans, the multi-employer insurance pools used by janitors, Teamsters, and grocery, hotel, and construction workers. These plans have long served to guarantee health care to union workforces with many employers, and to construction trades workers who often find themselves between jobs.

In a scathing March report called "The Irony of ObamaCare: Making Inequality Worse," the hotel workers union UNITE HERE denounced the ACA’s $965 billion in subsidies to commercial insurance companies as “one of the largest transfers of public wealth to private hands ever.”

Although they are nonprofit, Taft-Hartley plans are excluded from the subsidies. The exclusion defies logic, say union fund trustees. It seems the administration would rather subsidize private insurers who provide more expensive coverage on the exchanges than help existing Taft-Hartley plans continue to cover union members.

In some cases this crisis has translated into support for single-payer, which would be “like collective bargaining for the entire population,” said Gene Carroll of the New York State AFL-CIO’s training center.

He spoke to a crowd of union members, many of them administrators or trustees of Taft-Hartley plans, at an April health care summit sponsored by New York’s LaborPress. Activists there said Obamacare’s incentives to employers to drop insurance are undermining collective bargaining.

There is one positive reason the ACA could help push single payer: it has created big federal subsidies, the ones now going to private insurers, that could be used to help any state run its own system.

At the April Labor Notes Conference, union representatives from Vermont, Maine, Illinois, Washington, New York, and California talked about the status of their single-payer organizing.

California would be the biggest prize. Twice when Republican Arnold Schwarzenegger was governor, both houses of the legislature passed single-payer legislation, only to have him veto it.

Now, despite Democrat Jerry Brown as governor and Democratic supermajorities in both houses, advocates can’t even get a bill submitted. Legislators who enjoyed no-cost brownie points from their constituents for voting for single-payer have become born-again skeptics.

“This has been a real learning experience,” said Martha Kuhl, secretary-treasurer of the California Nurses Association. Her union helped launch the Campaign for a Healthy California, which aims to institute single payer by popular initiative, perhaps as early as 2016.

Unlike minimum-wage initiatives, which usually pass when taken to the voters, single-payer referenda have not fared well. California and Oregon tried in 1994 and 2002 respectively, but couldn’t get even 30 percent of the vote.

Still, California unions built a successful organizing model in 2012, when they campaigned for a proposition that increased taxes on the rich to fund education, and against another that would have paralyzed unions’ political action. Unions pulled out all the stops, spending massively and dedicating unprecedented staff time. In Oregon in 2010, voters passed two tax-the-rich measures.

“But Governor Cuomo hasn’t lifted a finger to support it, and the state senate is a real nest of vipers,” Wade said. “We’re going to need a strong movement to get this job done.”

Mark Dudzic is national coordinator of the Labor Campaign for Single Payer, which will hold its national strategy conference in Oakland August 22-24, “Organizing for Healthcare Justice in the Age of Obamacare.”

A version of this article appeared in Labor Notes #423, June 2014. Don't miss an issue, subscribe today.
Related
Will Urgent Care Doctors Be Forced to Strike in a Pandemic for the Right to Go Home? »
Understaffed and Unsafe, Bay Area Hospital Workers Strike »
Viewpoint: AFT's Refusal to Challenge Democratic Establishment Leaves Every Teacher Behind »
On Medicare for All: Fight for What We Want, Not What We Think We Can Get »
Racial Disparities in COVID-19 Point to Need for Medicare for All »