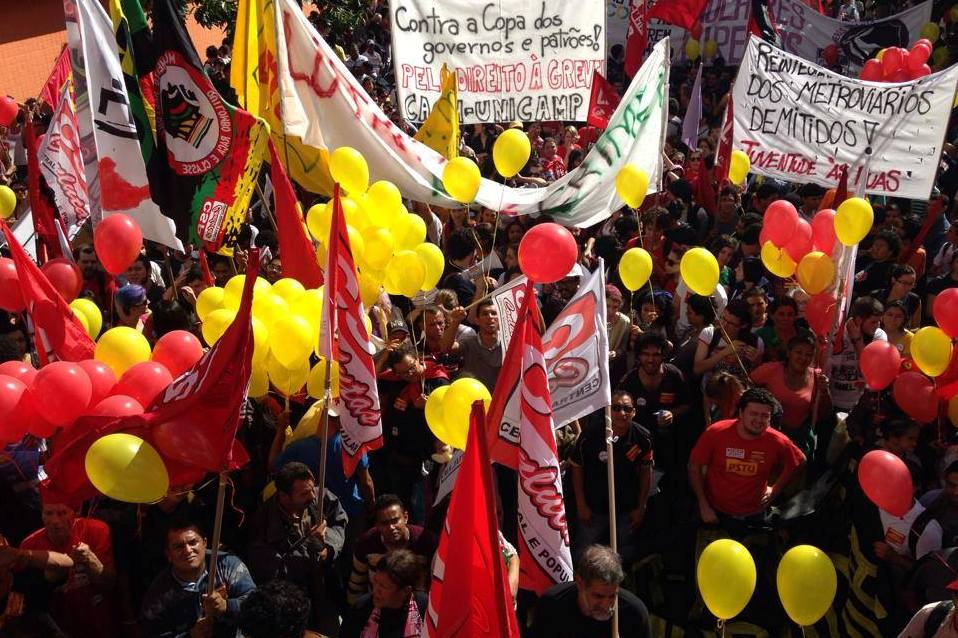 Demonstrators welcomed the World Cup to Brazil June 12. Many recent strikes have been called by the rank and file. Photo: Samia Gabriela Teixeira.

The World Cup is in full swing, and official propaganda from President Dilma Rousseff’s administration portrays Brazil as a wonderland. But Brazilians have been exposing the truth in a full year of demonstrations, protests, and strikes.

The massive public spending on the World Cup has thrown into contrast the poor pay, high fares, and starved public services Brazilians endure. And the construction has driven up housing costs and displaced poor workers.

Protests began last summer when two million people, mainly youth, filled the streets of several cities. The demonstrations kicked off protesting transit fare hikes and spread to include causes such as an end to official corruption.

In January, a 10-day bus drivers strike brought the city of Porto Alegre to a halt. The strike wasn’t led by union officials—the union is conservative—but by the opposition union caucus backed by Bloco de Lutas (Fighting Bloc).

Janitors who clean the streets in Rio de Janeiro also struck during Carnival, leaving the city a mess. In spite of that, most people supported the janitors against the mayor, who was refusing to increase their wages.

“The mayor says that our movement is a riot, but a riot is an uprising of prisoners,” one of their leaders declared to the mainstream newspaper O Globo. “Here is an action of workers, unless the mayor believes that janitors are thugs.”

The janitors’ rebellion started because the mayor and union officials had agreed on what workers thought was a too-small wage increase: 10 percent (Brazil faces 6.37 percent inflation this year). Like the bus strike, this was led by an opposition caucus. It ended with janitors winning a 37 percent increase.

The São Paulo metro workers union is calling for international support as it campaigns for the rehire of all 42 workers fired after the June 5-9 strike.

Messages of support should go to the union at sindicato[at]metroviarios-sp.org[dot]br and the CSP-Conlutas federation at secretaria[at]cspconlutas.org[dot]br.

Another wildcat strike, by the 22,000 workers at the Petrochemical Complex (Comperj) in Rio de Janeiro, lasted 40 days. They got a 9 percent increase plus some other benefits.

In the end, a fired member of the safety commission said, “Even dismissed with no rights, I feel proud to have carried out this struggle, as today I feel myself [to be] a real human being.”

Construction workers too carried out many strikes in 2013 and 2014, though these also were not supported by their unions. Eleven workers have lost their lives building or renovating football stadiums.

It’s notable that many strikes are being organized from below, without the approval of union leaders. Activists are seeking alternatives to pro-government unions and federations.

CSP-Conlutas, a militant federation formed by unions and activists who broke away from Brazil’s largest labor federation, the CUT, is becoming a pole of attraction for this new generation of labor activists.

“Without support from their unions, they look to us or any of the unions affiliated to CSP-Conlutas to provide infrastructure for their struggles,” says Atnágoras Lopes, a construction worker who is one of the federation’s leaders.

Labor sociologist Ruy Braga, at the University of Sao Paulo, links this new labor movement to the increase in casual and outsourced workers, underpaid and working in degraded conditions. They’re the ones who are “rising against union officials and their compromising spirit,” he explained to alternative newspaper Correio da Cidadania. Casual and outsourced workers in Brazil may have unions, but often don’t share the same union or the same contract as regular workers.

‘Who Is the Man who Threatens the World Cup?’

Union officials have led some strikes, including those of public university employees, and workers in the Ministry of Culture and in the Brazilian Institute of Geography and Statistics.

The most important was the Sao Paulo metro workers strike June 5, the anniversary of the 2013 demonstrations about fare increases, and shortly before the start of the World Cup. The union was defending the right of public transit and demanding a 12.2 percent pay increase.

Nearly all workers crossed their arms for five days, and rallied with community members raising banners reading “Transport is not a commodity.” The union offered to suspend the strike if the metro were made free.

A court ordered them back to work, but they refused. Only supervisors kept working and managed to open some metro stations. Despite the disruption to the transportation system, 77 percent of the population supported the strike, according to a survey carried out by a mainstream TV channel.

The governor of Sao Paulo sent the riot police into metro stations to beat and arrest striking workers. Courts sided with the governor and declared the strike “abusive.” Then 42 workers were fired. The union is campaigning to reinstate them, and the strike is suspended as of this writing. (See box.)

The Sao Paolo metro strike got international attention and support. The mainstream newspaper O Estado de Sao Paulo published a profile of Altino Prazeres, the union president, with the headline, “Who is the man who threatens the World Cup?”

On top of labor struggles, there are community and student mobilizations to protest exorbitant World Cup expenditures. They’re motivated by dissatisfaction with corporate privileges and low-quality public services. Dilma Rousseff’s administration is their main target.

Interestingly, these mobilizations have no presence from traditional organizations like the CUT, the landless movement, or the national students’ association. Even the homeless movement, which had been occupying an area next to a $400 million stadium in Sao Paulo, compromised with Rousseff’s administration in exchange for the building of 2,000 housing units.

Instead, the protests are led by new formations, such as Na Copa vai ter luta (There will be struggles during the world cup), Não vai ter Copa (There will be no World Cup) and ¿Copa para quem? (Who is the World Cup for?).

There’s no sign this struggling mood will stop after the World Cup. On the contrary, there are many opportunities for contract campaigns in traditional sectors—metal, oil, and bank workers—to link up with popular, youth, and non-union labor struggles.

Claudia Costa is a journalist at CSP-Conlutas and teaches postgraduate courses in Social Communication at Metropolitan College United (FMU) in Sao Paulo. She also worked as an intern at Labor Notes.

CORRECTION: This article has been updated to correct the spelling of President Rousseff's name.