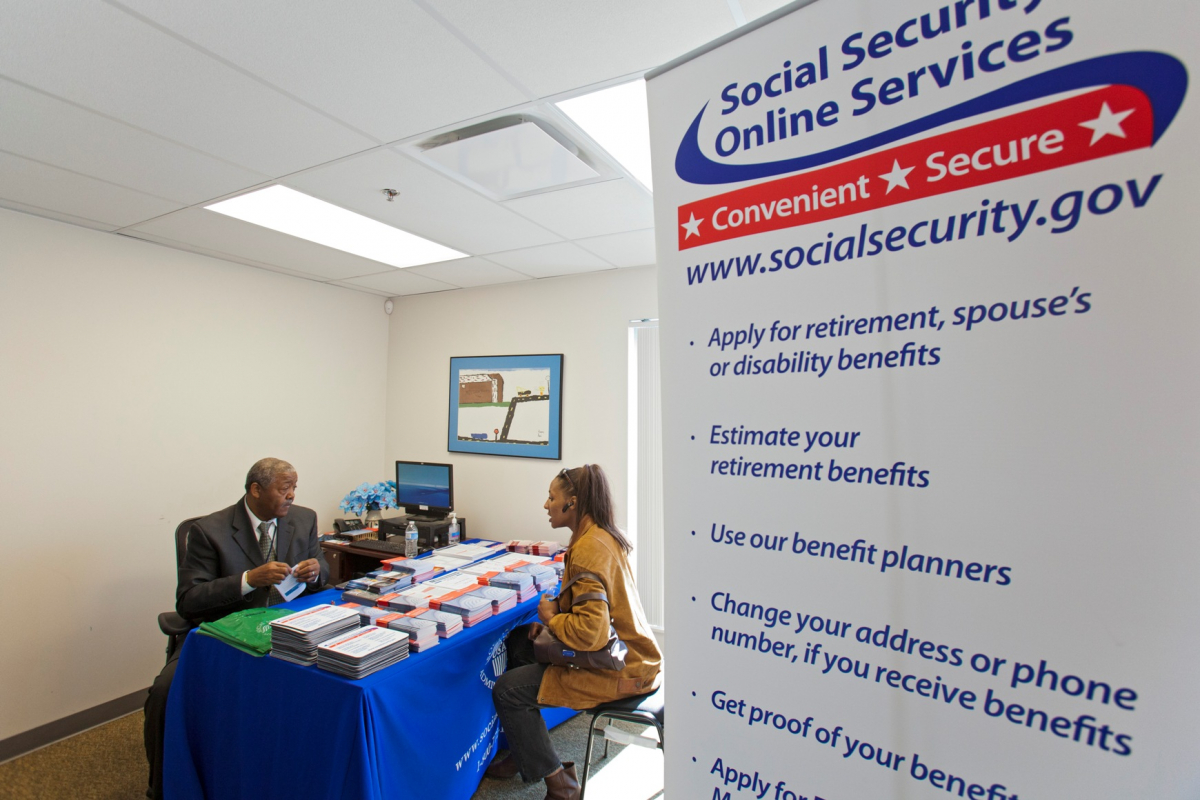 A Social Security worker helps a veteran with benefits questions, next to a poster promoting the agency’s online services. Many claimants who file on the internet don't get all the benefits they're entitled to. Photo: Jim West/jimwestphoto.com.

Need to figure out whether it makes sense to retire at 62 or 65? Wondering how much your monthly Social Security benefit will be? Been married three times and wondering what that means for your benefit?

Answers have never been farther than your local Social Security office, where employees are extensively trained to give you accurate and helpful answers. There’s a reason Social Security is the most popular of all government programs.

But that will change if the Social Security Administration’s “Vision 2025” comes to pass. Bureaucrats are mulling closure of most of SSA’s more than 1,000 community field offices in the U.S., where 43 million people sought services last year.

Even as the number of visitors continues to grow, Vision 2025 would virtually eliminate face-to-face service, replacing it with Internet services and an 800 phone number.

Thirty thousand field office employees would be laid off—following nearly 11,000 positions already eliminated. When SSA sought its employees’ input for Vision 2025, they responded overwhelmingly that field offices were vital to the agency’s mission.

“Americans are going to be cheated out of what they deserve,” said Witold Skwierczynski, head of the workers’ union bargaining council. “Every Social Security beneficiary deserves the personal assistance they have paid for their entire lives.”

The 800 number, now plagued with long wait times, would likely be automated. Beneficiaries would have to navigate through questions before they could speak with a live representative. And the Government Employees union (AFGE) suspects SSA would outsource the call centers to other countries.

The confusing MySSA website poses its own challenges. Till now, beneficiaries have been able to get documents such as verification of Social Security numbers and verification of benefits received simply by going to a field office and asking for them.

Such records are often needed the same day, to obtain mortgages, apply for jobs, and qualify for federal aid programs. Going through the SSA website, it could take a week or more for the most common types of documents to show up in physical form in a requester’s mailbox.

And later this year, SSA already plans to stop issuing these simple verifications at field offices—requiring instead an online or phone contact, and then a wait.

“The plan makes the assumption that in the year 2025 people will want to conduct all their business via the internet and will not leave their houses,” said Matt Perlinger, a claims rep in Omaha.

“Our offices are busier than ever. People continue to demand face-to-face service in order to understand the complex program that is Social Security. It’s the caring and dedicated SSA employees that take the time to thoroughly explain these programs.”

The loss of in-person services would create a serious hardship for the millions of seniors who do not have a computer or Internet access. It would also increase the distances they will need to travel to get to whatever offices remain.

The Social Security Works coalition, which fights to strengthen the program, is campaigning to reopen recently closed field offices in Florida, Massachusetts, New York, and California.

Director Alex Lawson says, “The public takes a Social Security office closing very badly. It always makes the local news. We want to make sure all the service cuts and office closings together make the national news.”

He points out that Social Security is under threat from many directions. Only after loud objections from the public did President Obama abandon his drive for an inferior cost-of-living formula. The office closures, service cuts, George W. Bush’s try at outright privatization—all, he says, are “part of the same Wall Street-led attack on Social Security.”

Reducing services erodes confidence in Social Security overall, he said, so the office closures threaten the future of the entire program.

Lawson pointed out that documents available at the field offices are “extremely important for accessing other services, like mortgages. A large number affected are seniors in energy assistance programs; they need to get verification of their income to qualify.”

One recently abandoned service was the reassuring document you used to receive each fall, spelling out your earnings for each year of your life and telling how much Social Security you’d eventually get. You could also check it for errors. The Social Security Administration stopped sending the notices in 2011, to save $70 million per year—peanuts for an agency with a $2.8 trillion trust fund.

Jim Campana, a union officer for SSA workers, said, “There were meta-messages that were sent with these earnings records—that the worker has paid into Social Security all these years, and SSA has a record of it, and the worker may be drawing soon, and getting such-and-such an amount because of these earnings—and all this is real.

“And in the meantime the worker is protected now, for disability, and, in the event of the worker’s death, survivors are covered.”

Pressure from the public and from Congress forced SSA to resume the paper mailings this September to people who aren’t yet receiving benefits, but they will now get them only every five years between the ages of 25 and 60 (annually after that), and only if they’ve never signed up to view their statements online.

“The statements are understated eye-openers that would tend to foster support for Social Security,” said Campana, “but they’ll do so only one-fifth as well if they come only every five years.”

Skwierczynski noted that, according to surveys of SSA employees, many claimants who file on the internet make decisions that could lead to the permanent loss of benefits. SSA employees are trained to catch those mistakes.

Ryan Gurganious, a claims rep for the disabled in North Carolina, cited an example: “When a disabled person is working, we’ll ask them, ‘In your job do you have any special expenses you have to pay to be able to work?’ They might say, ‘I have to get the county transportation service to come pick me up in my wheelchair, and that’s a $40 fee every month.’

“We know that that $40 comes out of the equation when we’re figuring their benefit, so they’ll get a larger SSI check. But the computer’s not going to ask them that.”

Labor Notes staffer Jenny Brown cites a personal example. Her father was originally told he was just shy of the required work credits to get Social Security benefits. He’d worked for many years for a state college that wasn’t part of the system at the time.

But an alert field office worker realized that he was also a World War II combat veteran—and a special rule for those vets put him over the limit to get a monthly check.

David Sheagley, an AFGE representative and SSA teleservice-center representative in Cleveland, notes that SSA workers “assist folks during stress-filled transitions whether it be death, disability, or retirement. In other words, our mission at SSA absolutely requires that human beings be available to talk with the public.”

Another aspect of SSA’s long-range plan is that those who use the MySSA site run risks. The New York Times reported that Experian, the private credit-data company that manages a portion of MySSA user data, was hacked by a Vietnamese criminal ring. Though SSA data were spared that time, 200 million accounts were compromised.

H.R. 3997, backed by AFGE, would put a moratorium on field office closures until SSA provides justification. The bill also requires that the community be allowed to weigh in on potential closures. The bill faces an uphill battle to reach the U.S. House of Representatives, though. As of May 9, it had only 15 cosponsors.

“No one asked for this plan,” said Skwierczynski. “These Social Security benefits belong to all Americans. Our mission is to maintain the level of benefits and service they have earned.”

DEATH BY A THOUSAND CUTS

Although needs are expanding as baby boomers retire, SSA isn’t waiting for 2025. Management has already shuttered 80 field offices and reduced hours at the rest by closing at noon on Wednesdays and at 3:00 on other weekdays.

AFGE encourages union members and all who expect to receive Social Security—that is, just about everyone—to push back against Vision 2025. The afge.org/saveoursocialsecurity site includes ways to ask your lawmaker to cosponsor H.R. 3997. Site visitors can send a letter to the editor and find tools to educate their communities.

Jim Campana is an AFGE representative and works for Social Security in Michigan.

A version of this article appeared in Labor Notes #423, June 2014. Don't miss an issue, subscribe today.
Related
Review: How Workers Can Safeguard Pensions »
Get Fossil Fuels Out of Our Pension, Say Environmental Protection Workers »
Jordanian Teachers Union Leaves Behind Legacy of Wins »
No One Else Was Going To, So These Teamsters Saved Their Own Pensions »
A Common Defense: Mobilizing Veterans in Labor to Beat Trump and the GOP »