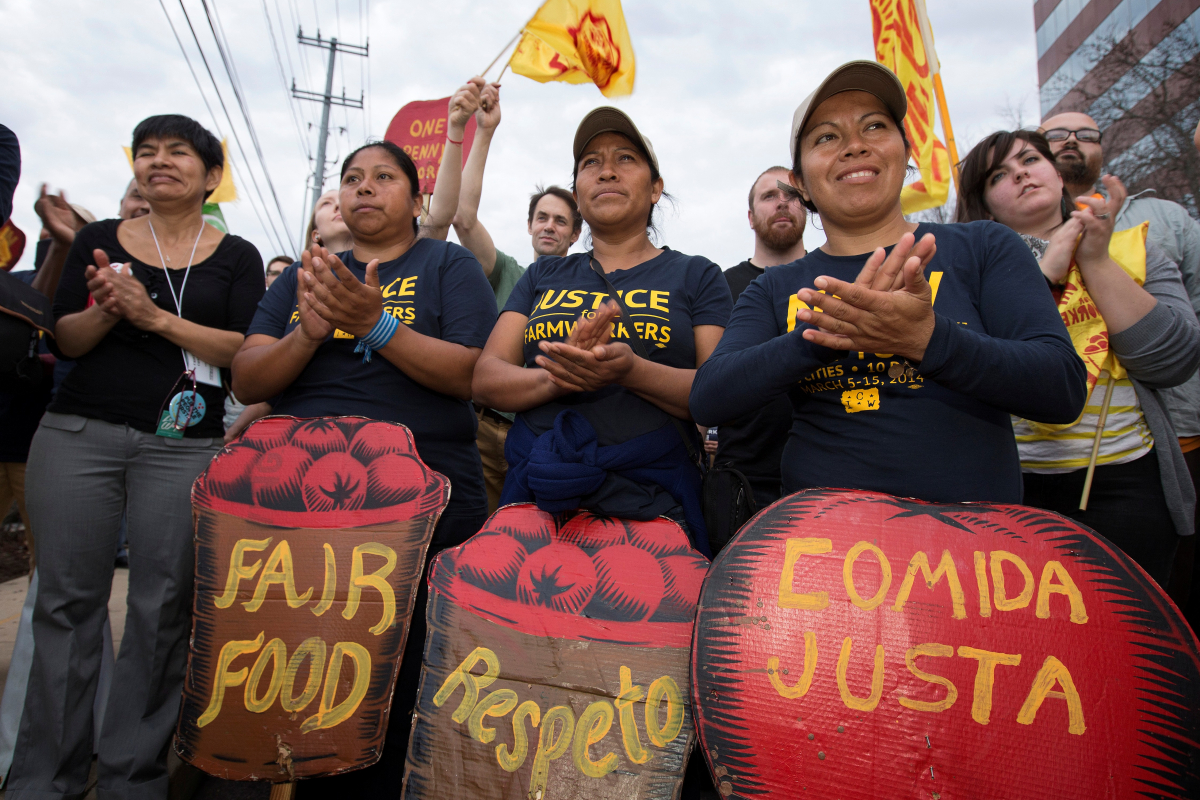 Last year was hard on Walmart’s shiny brand. From Bangladeshi garment workers crushed in a building collapse while sewing for the chain, to striking retail workers comparing the Waltons’ unbelievable riches to their own unlivable paychecks, to customers driven away by empty shelves, the company has been struggling to create good news about itself.

Still, it was a surprise when miserly Walmart signed an agreement in January with Florida’s Coalition of Immokalee Workers, agreeing to pay pickers 1.5 extra cents per pound for fresh tomatoes.

CIW had been talking to Walmart for a while, said longtime CIW member and organizer Greg Asbed, but it’s the first company to sign up before any public protests.

He attributed the victory in part to the strength of CIW’s program, which went from theoretical to operational three years ago. “Most (companies) came in when it was an idea, a hope, but now the program is working,” Asbed said.

It’s not just the pay increase. Now CIW trainers educate workers about their rights, on company property and company time. Each farm has to adhere to CIW’s Fair Food Code of Conduct if it wants to sell tomatoes to the big brands that have signed on.

The program’s enforcement arm, the Fair Food Standards Council (FFSC), has eight full-time investigators, but the program doesn’t rely on them to be eyes and ears of the code, said Asbed. The goal is to make all 30,000 Florida tomato workers into monitors, watching for violations and human rights abuses.

But CIW leaders soon realized, said FFSC director Laura Safer Espinoza, that it would be better to have a local organization, dedicated to the project, with investigators who would come to know those involved.

So they asked Verité monitors to train locals and they set up the Fair Food Standards Council, which now has eight field staff, an accountant, and a director.

Currently the Council relies on foundation support, but the goal is to have a mixture of funding sources, including employer and buyer contributions and consulting fees. CIW was hesitant to fund it through the growers or buyers too soon, wanting no conflicts of interest as the program took shape, said Espinoza.

A six-person board includes three CIW members, a member of the clergy, a university professor, and a representative of Compass, one of the cooperating food service companies.

The tomato pickers are particularly vulnerable because of their unstable seasonal work. Most are immigrants from Mexico, Central America, or the Caribbean, with up to a third undocumented.

The Fair Food Code was created to deal with the fact that large buyers like Walmart and McDonald’s, through their purchasing power, were driving down the cost of tomatoes—squeezing both farmers and farmworkers.

Unless the rich corporations who controlled the market were forced to put in more money, pickers would be working for less and less, under harsher and harsher conditions.

Slavery in the fields was sometimes the result. Over two decades CIW exposed slaveholders and freed more than 1,200 farmworkers from forced labor.

Tomato workers were paid as little as farms could get away with, and regularly intimidated so that they feared losing their jobs and their housing, often controlled by the employer.

The corporations agree to pay more, and to buy tomatoes only from farms that adhere to the Code of Conduct. Growers agree to comply because they want to sell tomatoes to these big customers.

The 1.5 cents is passed through the chain of buyers and participating growers to the workers in a carefully audited system. Workers’ pay stubs show the premium, along with their hours and how many buckets they picked.

The pay stubs themselves are an innovation. Before CIW’s campaign, many workers were paid in cash, there was no paper trail showing earnings, and wage theft was rampant. Now workers have timecards they control, and get paid at least minimum wage for all the hours they spend on the farm, said FFSC director Laura Safer Espinoza.

Without the premium, the rate for picking a 32-pound bucket is 60 cents, less than 2 cents a pound.

In a recent report, FFSC gives an example paycheck: $614.35 for a 63-hour week. Of that, $81.71 came through the Fair Food premium, mostly from Subway and McDonald’s. If all the companies who bought the grower’s tomatoes were participating, the premium would be substantially higher.

CIW has been active since the 1990s, and Taco Bell signed an agreement in 2005, but it was not until November 2010 that the growers group, the Florida Tomato Growers Exchange, dropped its opposition. Previously it had expelled growers who cooperated with CIW.

The provisions of the code reflect the appalling conditions farmworkers face. Many ban things that are already illegal, but before the CIW’s efforts, the law was seldom enforced. Growers must:

In the first three years of the program, around $11 million extra has been distributed to workers.

The farmworkers have had less luck with supermarkets than with fast food chains, making Walmart—which sells more groceries in the U.S. than any other grocery chain—a big prize. CIW is currently targeting Publix, Stop & Shop, and Kroger, and burger chain Wendy’s, the last major fast food holdout.

Walmart already buys most of its tomatoes from Fair Food Program growers. That’s no surprise: after 20 years of CIW organizing, 90 percent of Florida tomatoes are grown on participating farms.

But the Walmart agreement is important because of the huge volume of Florida tomatoes that end up in Walmart stores. The main competition is tomatoes grown in Mexico, where violations of worker rights are rampant, Asbed said.

CIW estimates that more than 14,000 workers, nearly half the tomato workers in Florida, have been through its trainings, led by farmworkers. Workers hear their rights under the Code, and learn that if they are retaliated against for speaking out, the grower can be kicked out of the program, losing important customers as a result.

All workers get a booklet in their mother tongue, listing their rights and responsibilities. There are videos for those who don’t read, with CIW members acting out scenarios. Growers must distribute the booklets along with a confidential complaint phone number, which also appears on pay stubs.

In addition to taking complaint calls, the FFSC conducts audits, interviews managers and supervisors, and talks to workers. Inspectors ride the buses, go to workers’ housing, and make announced and unannounced visits.

Workers have used the number to lodge 450 complaints since 2011 when the hotline was set up. The most frequent is supervisors requiring workers to overfill buckets, called “cupping,” which is prohibited by the Fair Food Code. Other complaints involve health and safety, retaliation, and sexual harassment.

“In prior years, complaints were a lot more dramatic than they are now,” said Espinoza. “They have become thankfully mundane.”

When growers violate the code, they can be suspended for three months, six months, a whole season, or be kicked out completely. After one grower who didn’t act against sexual harassment was expelled, the lost sales caused the farm to rethink. It eventually fired the harasser, created a policy, and conducted trainings against harassment.

“Over time, [managers] have removed a lot of the bad actors, farm bosses who wouldn’t change their m.o.,” said Asbed.

“I don’t know of any other model like this, and the results speak for themselves,” said Espinoza, a former New York State Supreme Court judge. She noted the speed with which problems are resolved, often in a week or two—compared to court cases that drag on for years.

So far, among 30 participating farms, four growers have been suspended and five were put on probation in the 2012-2013 season.

Suspension means losing access to important customers, but there are still enough low-road customers that growers can survive outside the program. The Walmart agreement will help, say CIW activists.

Tomato workers call in complaints when they migrate to harvest other crops. “We get calls from outside the Fair Food Program, so we know there’s a very dark world out there still,” said Espinoza.

Workers describe being sickened and hospitalized after being ordered to enter fields where pesticides were just sprayed, supervisors firing off guns in the field, beatings. The reports go to CIW, which investigates, bringing in law enforcement if warranted.

Workers in the Fair Food Program “get a vision of something very different, and then they get to another crop and say, ‘This is horrible, can’t you do something about it?’” Espinoza said.

Walmart has agreed to expand the program into other crops and other states. Asbed is optimistic, but cautious about the program growing too fast.

The program is as “intense and strong and deep as it is,” he said, because the effort was built slowly and carefully. “It has been worker-led, worker-driven, and grew out of workers’ organizing for the last 20 years.

At the Labor Notes Conference April 4-6 you can hear from workers all along Walmart’s supply chain—from Bangladeshi garment factories to Illinois warehouses to retail stores. And hear from CIW and other food chain workers, too.

A version of this article appeared in Labor Notes #421, April 2014. Don't miss an issue, subscribe today.

Jenny Brown was a co-editor of Labor Notes.jenny@labornotes.org
Related
Spring of Discontent: Mexican Berry Pickers Strike for a Bigger Share of Profits »
Viewpoint: Abolish the H-2A Program! »
Trouble in the Tulips: Organized Farmworkers Win Basic Demands in a Quick Strike »
Mexico’s Only Independent Farmworker Union Struggles On Despite Obstacles »
Billionaires Can Have the Cosmos—We Only Want the Earth »