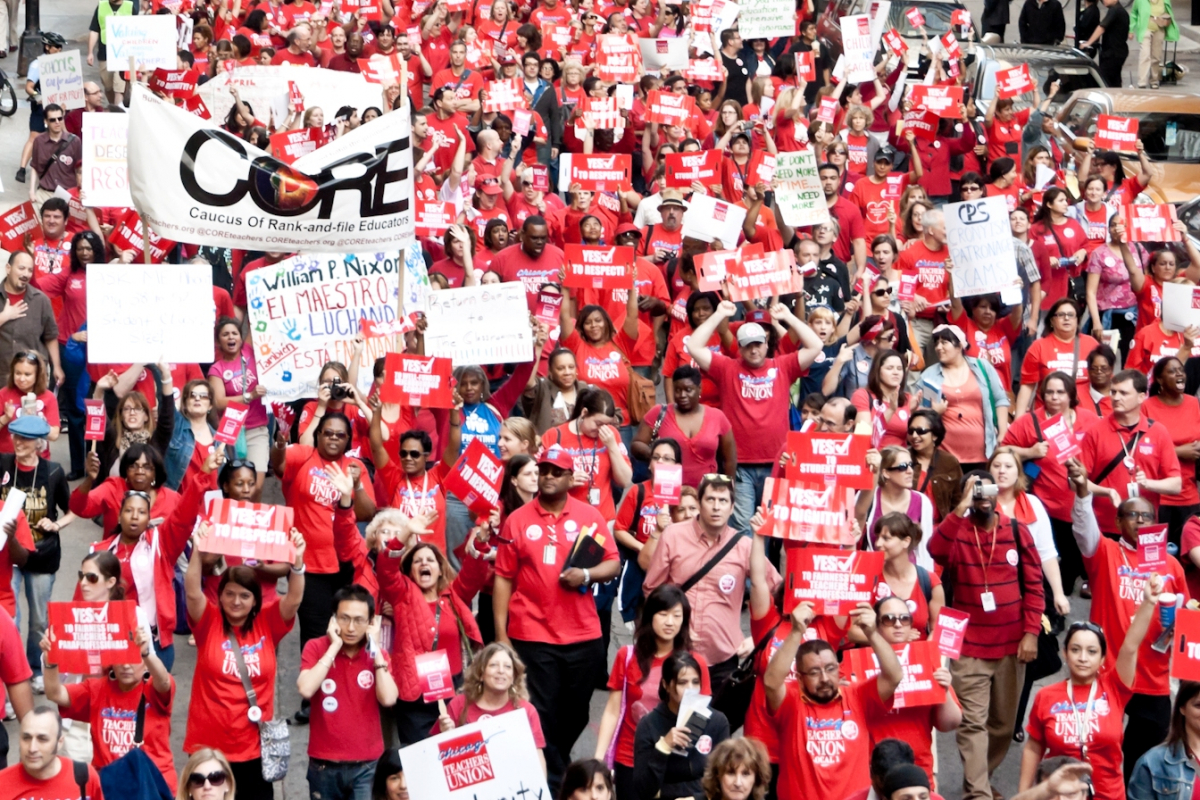 The CORE caucus in the Chicago Teachers Union combined relentless activism with systematic rank-and-file organizing, to convince voters to elect their slate. Labor Notes' newest book is How to Jump-Start Your Union: Lessons from the Chicago Teachers. Photo: Sarah Jane Rhee, loveandstrugglephotos.com.

Our new book, How to Jump-Start Your Union: Lessons from the Chicago Teachers, shows how activists transformed their union and gave members hope. This excerpt tells how the Caucus of Rank-and-File Educators (CORE) campaigned for top offices, and won.

It’s one of the universals of organizing—first you make a list.

Elementary teacher Alix Gonzalez Guevara remembers staying up late transferring data about each school from a district-published book into an Excel spreadsheet: region, address, how many teachers, how many students.

This became a Google document, an online spreadsheet available to everyone working on the campaign. The schools were grouped by regions. Within each, a couple of lead activists took responsibility to find people to do outreach at each school.

Whenever someone went to leaflet or hold a meeting at a school, they’d document it in the central spreadsheet. They also entered their current percentage estimate of support at the school: an educated guess based on conversations with members there, what the delegate (steward) said, and how many had signed the petition to get CORE’s candidates on the ballot.

On a typical visit, the CORE activist might spend a half-hour in the parking lot talking with teachers about the issues.

Then she would go inside, chat with the clerk, stuff the mailboxes with the latest CORE flyer, and leave a personal letter for the delegate, with a phone number if he wanted to set up a meeting for candidates to meet teachers and answer questions.

“We had a group of 20 who were available to go debate with the other caucus candidates at the schools,” said history teacher Jackson Potter. “The decentralized approach allowed us to run circles around the opposition, who only deployed the four officers.”

One simple tool CORE came up with was the 24-hour bin. A member would volunteer to host a plastic bin outside his or her house in a place where people could get to it at all hours—on the front porch, for instance, or under the stairs. The bin would be stocked with the latest flyers or posters.

During the campaign there were five of these bins scattered around the city. The system proved so handy that CORE kept using it for caucus flyers after the campaign was over.

Over the course of the campaign, the caucus hit most schools three times and some five times. The tracking made it easier to prioritize larger schools, ones that hadn’t been visited much, those where CORE’s forces were weaker, or schools where the caucus wanted to build up a base of potential activists.

At caucus meetings, activists would report on the schools they had visited and pick up five or more new ones. Sometimes they would role-play, reporting what new questions they were hearing and brainstorming how to respond.

But while they were campaigning, CORE activists also continued their push to attend every school board meeting and school closure hearing. They picketed the mayor, organized marches, and held candlelight vigils.

After all, CORE’s activist identity was its campaign platform. All the events gave the candidates opportunities to make their case publicly, tell their personal stories, and prove their words were backed up by action.

“We always made sure we wore a CORE button, a CORE shirt,” elementary teacher Sarah Chambers said. People would “look around when a school’s closing, and they wouldn’t see any UPC [the incumbent caucus].”

The school closure fights were the reason math teacher Carol Caref was able to get so many teachers at her school to vote for CORE. “We were always afraid we’d be next on the list,” she said.

“CORE was camping out all night in front of schools threatened to be closed, joining parents and kids,” said social studies teacher Bill Lamme, “while the union was sitting on its hands and being a little too generous in their compensation packages for themselves.”

To learn much more, order the book.

A version of this article appeared in Labor Notes #419, February 2014. Don't miss an issue, subscribe today.
Related
Minneapolis Strikers Demand a Living Wage for the Lowest-Paid Educators »
Richmond Educators Are First In Virginia to Win Bargaining Rights »
Twin Cities Teachers and School Employees Gear Up for Strike »
As Omicron Rages, Teachers and Students Fight for Safety Measures in Chicago and Elsewhere »
Teachers Strike against a ‘Heartless’ School Board in Biden’s Hometown »