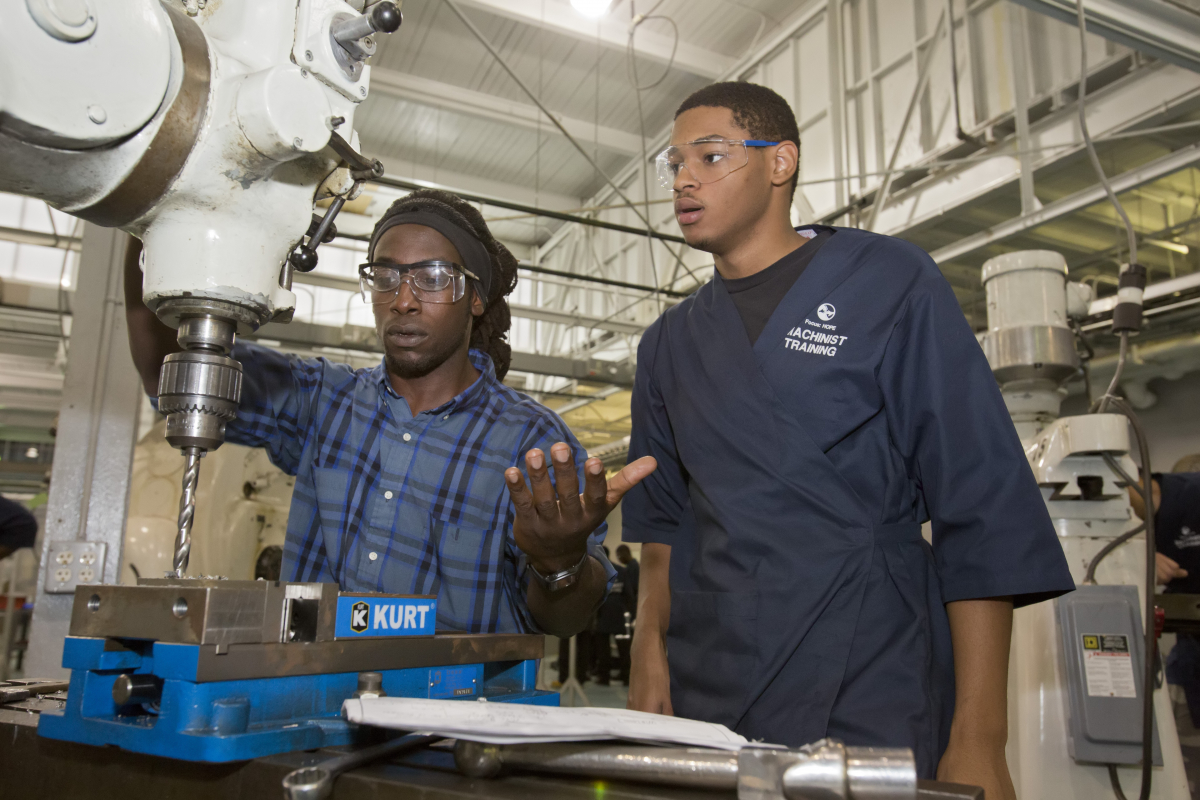 Instructor Dan Blue (left) works with a student on a drill press at the Machinist Training Institute in Detroit. Workers are improving their skills, but that doesn’t mean there are jobs out there. Photo: Jim West/jimwestphoto.com.

Haven't seen too many "Help Wanted" signs lately? You haven't been looking hard enough. At factories across the country, thousands of good jobs are going begging.

If that doesn’t sound quite right to you, take it up with the National Association of Manufacturers. NAM and other industry groups insist at least 600,000 factory positions remain open.

These vacancies are supposed to be the result of a “skills gap”—a shortage of workers with the right stuff for today’s high-tech factories. The gap looms large in high-level discussions of what ails the American economy—and it drives much public policy.

Who Foots the Bill?

While employers bemoan a skills gap, they’re not putting up their own money to close it. Just the opposite. Manufacturers provide far less on-the-job training than they once did.

Apprenticeships—which oblige employers to assume the lion’s share of training costs—have fallen 40 percent since 2008. The decline of America’s machine-tool industry, for instance, can be attributed to the collapse of the apprenticeship system.

There’s just one time when companies do eagerly foot the bill for job training: when it serves to undermine the position of union labor.

Last summer, anticipating a possible strike, Caterpillar placed 25 of its non-union employees into the welding program at a Milwaukee community college. Protests by the Steelworkers, who represent workers at Cat’s South Milwaukee plant, were brushed off.

Employers have also used state-funded training programs to ensure that workers with the wrong kind of experience—that is, a union background—are kept out of their plants.

In Georgia, taxpayer dollars were used to build a training center for the plant where the Kia Optima is built. Instruction there is provided through the state’s Quick Start program, designed to “meet the demand for skilled manufacturing workers.”

Jobseekers at the non-union Kia plant are required to go through the center’s “pre-employment process,” and nearly all of Kia’s more than 3,000 employees were trained in robotics, welding, and electronics.

In the process, though, workers already skilled in exactly those areas—members of the United Auto Workers—were evidently weeded out.

When Kia began production in 2010, not one of its employees came from among the pool of thousands of experienced auto workers, all UAW members, who’d lost their jobs when Georgia’s GM and Ford plants closed a few years earlier.

A group of UAW members sued to obtain records on the state’s involvement in Kia’s hiring practices, but their request was rejected by the Georgia Supreme Court.

“America wants a country that builds things,” says Caterpillar CEO Doug Oberhelman, industry’s leading skills gap spokesman (and board chair of the NAM), “but we have a problem. We don’t have the people we need.”

Such bipartisan agreement is reflected in budget priorities. Retraining is a touchstone for the Obama White House, and since the president took office more than 18 billion federal dollars have gone to job training programs. Republican Governor Scott Walker of Wisconsin recently committed $8.5 million to training.

Although unemployment remains high, the political focus has shifted away from creating new jobs. Instead it’s on retooling our education system to align with the skilled positions said to be already out there.

WHY ARE WAGES STAGNANT?

A host of academic studies have debunked the notion—but you don’t need a Ph.D. to figure it out. You just need to recognize the law of supply and demand.

“It’s hard not to break out laughing,” one economist noted recently. “If there’s a skills shortage, there has to be rises in wages [for skilled workers]. It’s basic economics.”

Yet wages in manufacturing—even for skilled workers—are stagnant at best.

Peter Cappelli, professor of management at the Wharton School of Business, hears frequent complaints from manufacturers claiming they can’t find enough machinists. “Yet,” Cappelli notes, “the pay for those positions has dropped 20 percent in real terms over the past 20 years, while skill requirements for many of those jobs have indeed risen.”

Studies from Illinois and Wisconsin on welding jobs—where employers often cite shortages of available workers—demonstrate that welders’ wages, as well, have decreased over the past decade, and there are thousands more unemployed welders looking for work than there are projected openings.

“We’ve probably all seen the TV shows where new homebuyers go out to look for a new house,” Cappelli says, “and they always are shocked to discover they cannot get what they wanted at the price they want to pay. The real estate agent never concludes the problem is a housing shortage. The buyers have to learn either to pay more or expect less. Is that happening with employers? It does not appear to be.”

When pressed, one manufacturing CEO acknowledged that for him, the “skills gap” meant an inability to find enough highly qualified applicants, with no “union-type experience,” willing to start at $10 an hour.

“That’s not a skills mismatch or even a labor shortage problem in any meaningful sense,” Marc Levine, professor of history and economic development at the University of Wisconsin/Milwaukee, makes clear. “That’s an effort to secure cheap and docile labor.”

“National data on wages, hours, the ‘job gap’ (the ratio of job seekers to available openings), and the skills requirements of projected job openings reveal no evidence of a skills mismatch in national labor markets,” Levine says.

In fact, the real deficit we face is a jobs gap. There are still many more unemployed Americans, across every sector of our economy, than there are positions to put them in. “Unemployment is high,” one analyst notes, “not because workers lack the right education or skills, but because employers have not seen demand for their goods and services pick up enough to need to significantly ramp up hiring.

“It is not the right workers we are lacking, it is work.”

“Training doesn’t create jobs,” says Anthony Carnevale, director of Georgetown University’s Center on Education and the Workforce. “Jobs create training. And people get that backwards all the time.”

Economist Paul Krugman states bluntly that claims of a skills gap provide cover for those “powerful forces [that] are ideologically opposed to the whole idea of government action on a sufficient scale to jump-start the economy.”

Cat CEO Oberhelman castigates the country’s “failing” schools for not turning out fully employable products—and faults Americans for not pursuing the rewarding careers he says are available in today’s factories.

Stories like this one, from a Wisconsin professor, don’t make it into Oberhelman’s script:

Take my former student, John. He did everything we ask young workers to do, earning two journeyman cards while working and attending Milwaukee Area Technical College full-time.

John left Briggs when it began moving jobs to low-wage states and Mexico. But his new employer, Rockwell, began outsourcing to nonunion, low-wage plants even before it eliminated all hourly workers last year.

So John started over again at Harley-Davidson. But, a year and a half ago, Harley laid John off.

CEOs like Oberhelman create the hype about a skills gap and then use it to duck responsibility for the joblessness they are responsible for.

The blame and the costs are offloaded onto workers, obliged to bankroll their own training, or onto taxpayers, as public schools and community colleges scramble to make their graduates more employable.

MIND THE OTHER GAP

It’s hypocritical, to put it mildly, for employers to bemoan the shortage of skilled labor while they lay off workers (including skilled ones) and pay less to those they retain. But their whining deflects attention from record profits and lavish executive compensation. .

Nonetheless, Boeing recently threatened its highly skilled (and unionized) workforce in Everett, Washington, that the company would move its new 777X plane out of state if workers didn’t take concessions. They gave in.

“Capable” workers were not Boeing’s goal. Cheap and compliant ones are what the company was after. Reflect for a moment about which sort of people you prefer to build the airplanes you travel in.

So, while the fictional skills gap provides a distraction useful to CEOs and politicians, workers (and taxpayers) should keep focused on what matters most: our ever-rising level of income inequality.

That’s the gap that needs minding.

Toni Gilpin is an educator and labor historian, and co-author of On Strike for Respect: The Clerical and Technical Workers’ Strike at Yale University, 1984-85.

A version of this article appeared in Labor Notes #418, January 2014. Don't miss an issue, subscribe today.
Related
'Let's Put a Wrench in Things Now': Deere Workers Strike as Company Rakes in Record Profits »
Countdown to a Strike Tonight at John Deere »
John Deere Workers Overwhelmingly Reject Contract, Could Strike Wednesday Night »
In a Surprise, John Deere Workers Get to See Contract Before Voting On It »
Workers Have Leverage. It's Time to Use It. »