Protests across North America Aim to Block 'NAFTA on Steroids' 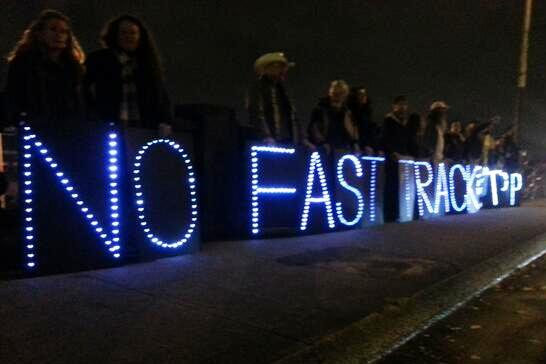 In the U.S., the key to blocking the Trans-Pacific Partnership is to stop Congress from granting the president controversial "fast track" authority to sign off on it. Activists in Portland, Oregon, brought out the Light Brigade to make their point. Photo: Oregon Fair Trade Campaign.

Workers across the U.S., Canada, and Mexico will unite in an Inter-Continental Day of Action Friday to stop a massive new trade agreement, the Trans-Pacific Partnership—commonly referred to as “NAFTA on steroids.”

In the U.S., the immediate fight is to block a bill that would grant the president “fast track” authority to sign off on the TPP. Defeating fast track would likely stop the TPP.

But there has been considerable backlash against the undemocratic concept. In November, anticipating its introduction, 151 Democratic Representatives signed a letter to the president stating they were opposed and would vote no on fast track; 21 Republican Representatives also submitted an opposition letter.

The last time Congress granted the president fast track authority, in 2002, it only passed the House by a slim two-vote margin.

When he signed the North American Free Trade Agreement in 1994, President Bill Clinton said the agreement would “create 200,000 jobs in this country by 1995 alone. Our administration will make this agreement a force for social progress as well as economic growth.”

Twenty years later, NAFTA has proven the complete opposite for all the countries involved.

Together, NAFTA and the World Trade Organization resulted in the loss of one in four U.S. manufacturing jobs. U.S. trade deficits—how much more we are importing than we are exporting—have spiraled out of control, hitting $350 billion or more every year since 2000.

NAFTA hasn’t brought the projected prosperity to Mexico’s workers either. According to the Pew Research Center, despite a moderate long-term rise in per-capita GDP, the share of Mexicans who live below the poverty line has not changed significantly in recent decades: 53 percent in 1984, 51 percent in 2010.

Now the U.S. Congress is considering passing the TPP, which would encompass 12 countries—40 percent of the world’s trade economy. President Obama calls it “a model for future trade agreements.”

Like NAFTA, the TPP has little to do with trade, and more to do with perpetuating a global race to the bottom for all workers. Of its 29 articles, only four deal with traditional trade issues such as tariffs and quotas.

One difference: this time the U.S. trade representative has been negotiating the TPP without the public exposure Bush and Clinton used to promote NAFTA. Negotiations have been conducted under a veil of secrecy. Six hundred corporate insiders sit at the negotiating table—while we the people are completely shut out.

Anyone, including members of Congress, who accesses the TPP is forced to sign confidentiality agreements restricting them from talking about the text. So the public has relied upon leaked copies from sources such as Wikileaks.

You can join the Inter-Continental Day of Action by attending an event organized in your area, calling your Congressional representatives, or connecting to an event through social media. Together we are stronger than the TPP.

Benjamin Gerritz is a board member of the Oregon Fair Trade Campaign and a member of SEIU 503’s Civil and Human Rights Committee.

Calling Congress, made easy: Visit StopFastTrack.com, type in your phone number, and they'll call you and connect you to your reps. Labor Notes is joining other groups in making a push for calls on January 29 to stop fast track.