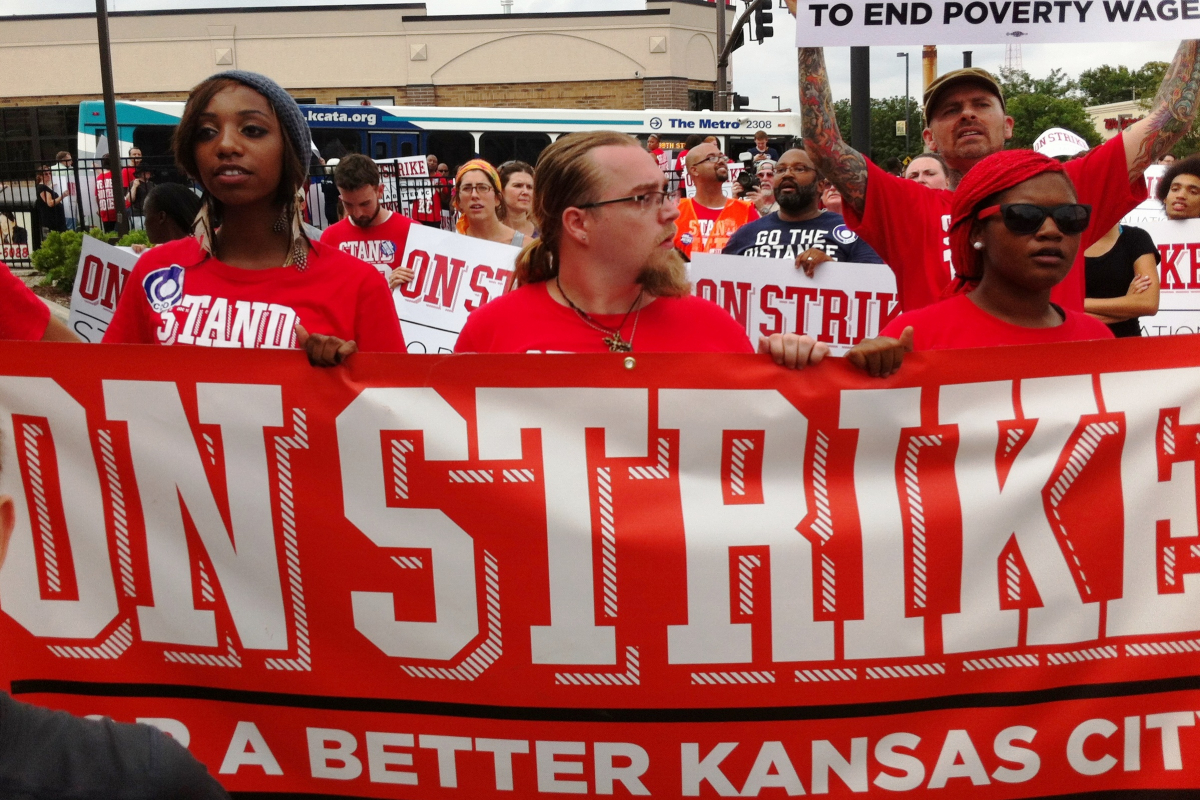 In Kansas City a labor “Right to Truth Committee” has sponsored a monthly Labor-Media Breakfast every month since 1988.

Born out of an earlier fight against “right to work,” the breakfasts allowed labor and the media to get to know each other away from deadlines and crises. Both found out who to call and can talk on a first-name basis. Jim Hadel of the Roofers union said years ago, “We established trust and an open line.”

Consequently, Kansas City labor became more media-proactive and more assertive, and media workers say the breakfasts made it easier for them to do their jobs.

At first, getting union officers to attend an open forum with media was a tough sell. Most didn’t trust the media and hadn’t thought about how to use media to build union power. Their standard response when called by reporters was “No comment.”

The media, of course, commonly called them “union bosses” and only came around if there were conflict or scandal. “We were seen as the bad guys,” said Herb Johnson, later secretary-treasurer of the Missouri AFL-CIO. Labor leaders thought media should report about peaceful negotiations that ended in a good contract, not just strikes.

On the other side, the media accused labor leaders of being unresponsive and having unrealistic expectations, always wanting good news. They said labor often viewed balanced coverage as betrayal and couldn’t distinguish between the news and editorials, or understand the differing needs of print and electronic media.

The Kansas City Star’s Diane Stafford said, “We used to call labor leaders and get the phone slammed down in our ears.”

The breakfasts were therefore a challenge to both sides. The Star sent some of its conservative business and editorial staff. Labor leaders bristled, and one right-wing columnist actually wondered aloud if he’d catch something if he sat too close. When union leaders launched strong criticisms of coverage, at times the media reps became testy and defensive.

Sometimes there were hot debates over issues like NAFTA, sometimes one side scoffed at the other’s point of view, but gradually relations improved, and labor leaders showed appreciation for increased coverage and fairer stories. There was celebration when one notoriously anti-union business columnist wrote in the mid-’90s bemoaning the off-shoring of good union jobs and criticizing consumers for buying imported sweatshop products.

To this day the breakfast agenda always starts with a review of the news of the previous month, and labor brings in articles, and occasionally even videotapes, of strike or demonstration coverage to critique.

Discussion of current labor issues includes alerts and background on upcoming negotiations or possible strikes, on organizing drives, growth or shrinkage of the workforce, political priorities, and charity events.

Sometimes there is general discussion of a policy issue like pensions or minimum wage. The media wants real-life examples. The Star’s Stafford says, “We get names, phone numbers, and emails of people we wouldn’t otherwise know and who we certainly don’t meet at the Chamber of Commerce. The breakfast opened up a whole new world to us.”

The agenda also has space for questions from the media and questions of the media, allowing both sides to learn how the other operates, thinks, and is structured.

To assist, our labor studies program at the University of Missouri periodically collaborated with the Right to Truth Committee and reporters and editors to organize workshops that discussed media structure, what’s news and who decides, and deadlines.

Reporters volunteered to do mock interviews with labor leaders, which we videotaped. They’d also give constructive criticism and the leaders got to take their videos home.

From all this, labor learned that reporters are workers, too. The breakfasts have seen great discussions of the pressures media workers face with the downsizing of newspapers and the intensification of work.

There have been attempts over the years to plan the agenda more tightly, and sometimes a union has been asked to do a five-minute self-profile, but generally spontaneous has worked. Some meetings are lively and full of information and discussion; others are over before the coffee gets cold.

Keith Chrostowski of the Star’s business page comes regularly. He notes that over the years, many of the labor leaders’ suggestions for stories have “found their way to page 1.” Another clear gain is that the term “union boss” hasn’t been heard in these parts for almost two decades.

The times have changed though, and the Labor-Media Breakfast has, too. For the first decade or more, the breakfast was routinely attended by the Star and most of the network TV stations. Occasionally radio reporters and public TV showed up; the labor media, both radio and print, were regulars. Labor and media reps alternated chairing.

But the downsizing of both media and labor has led to fewer reporters coming. The Star continues to send a staffer, but only one TV representative comes regularly.

Surprisingly, the breakfast is as well-attended as always by labor, with 30-40 people consistently coming. Some unions appoint an activist to go, with time off from work; some send business agents or legislative reps.

It’s clear that the breakfast now serves other functions, too. One of the reasons is that it has always been independent of any particular union or the central labor council. It’s governed by a steering committee and a chair, neither of whom interferes with the spontaneous free expression that characterizes the meetings.

Longtime chair Gordon Clark of the Transport Workers said, “The breakfast was not only a place to discuss reporting on labor issues, but we kept disgruntled labor leaders together during some dark days at the KC Labor Council.” That’s because everyone was welcomed. If you were part of the family of labor, broadly defined, you were accepted.

Thus it’s very different from the much more formal Labor Council or other meetings of labor bodies, which are generally not open to the media anyway. Other organizations come: Jobs with Justice, the OSHA labor liaison, the fast food workers organizing committee, people who are running ad hoc campaigns or labor-related events.

Since there’s no formal business, no motions to pass or actions to take, and since the goal is communication, sharing, and discussion, there’s an atmosphere of acceptance and equality, and no power plays.

Even an Electrical Workers (IBEW) retiree chapter sends a rep: an inveterate writer of letters to the editor. And Garth Stocking, young, fresh into union activism, and busy organizing demos of federal workers against austerity, says the meetings “ramp up the sense of unity and purpose which attracts us all to this movement. …They represent communion of a sort, or we might say fellowship.”

Who knows? says Bill Richardson, a veteran of the 1978 Missouri right to work fight and one of the Breakfast founders: “As the plague of right to work spreads, the Media Breakfast’s Right to Truth Committee may need to reassume its former duties.”

A version of this article appeared in Labor Notes #417, December 2013. Don't miss an issue, subscribe today.
Related
Steward's Corner: A Path Out of Fear »
Viewpoint: Publicly Fund News Media, Because Journalists Fight for Us All »
Steward's Corner: What to Do When Your Union Leaders Break Your Heart »
How To Pull Off a Quickie Strike »
Steward's Corner: Don't Complain, Organize! »