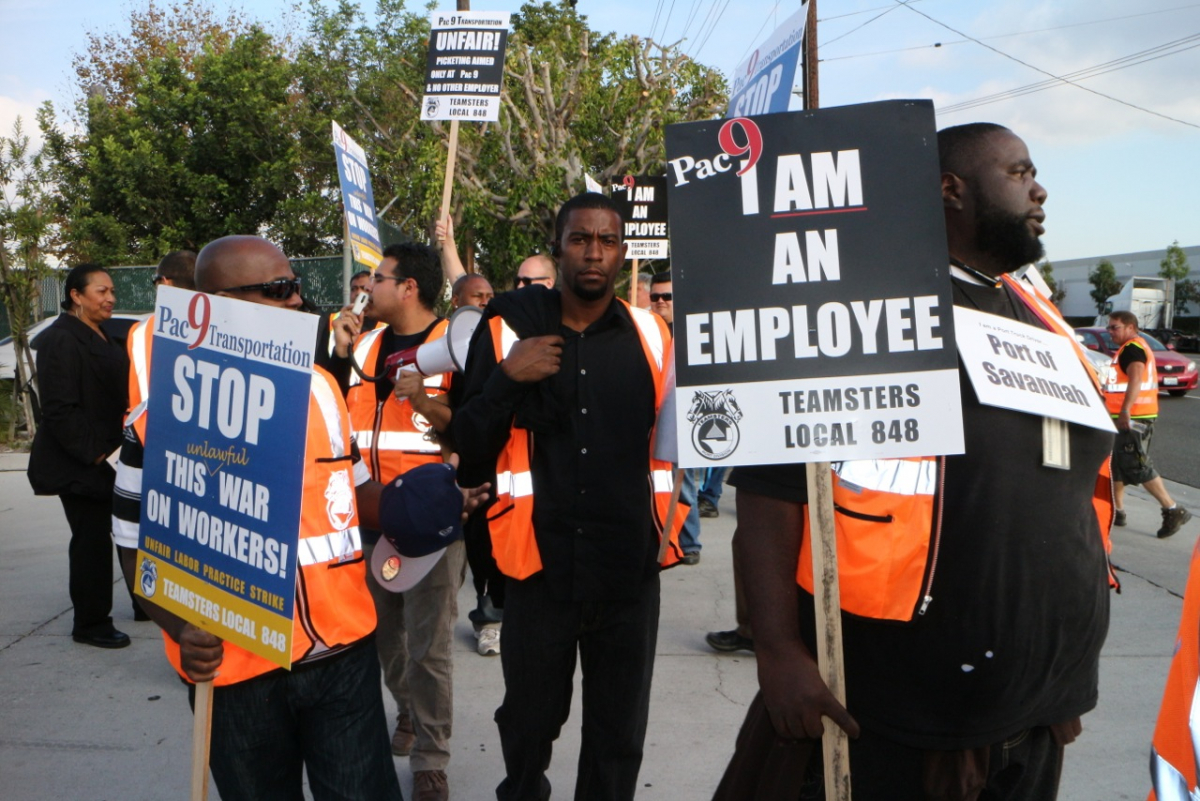 Striking port truckers in Southern California say their conditions are like employees', not independent contractors', and they should be paid that way. Photo: Slobodan Dimitrov.

One of the companies, Pac 9 Transportation, was also charged with falsely claiming that its employees are independent contractors. Standing in front of the Pac 9 entrance an hour before his shift would have begun, Linares explained there’s nothing independent about his relationship with management.

“We are under dispatch,” he said. “They give us a load, we go to the port and get the load. We have to take that to a destination [a warehouse or railyard]. They give us another load to take from that destination to the port. They keep us back and forth.

“When we are stuck inside the port, they don’t let us leave the port.”

Pac 9 drivers have filed claims with the California Labor Commission charging the company with essentially stealing more than $7 million that should have been wages. They are striking to demand the company recognize them as employees, so they can unionize with the Teamsters.

Strikers at Green Fleet Systems and American Logistics, who are employees, are already organizing with the Teamsters. They say management has retaliated with harassment, which is illegal. Workers at all three companies have filed unfair labor practice charges with the National Labor Relations Board.

As in the Walmart and fast food strikes that have captured the attention of labor activists this year, today’s port trucking strikers are a small minority of the workforce. Linares, who is from El Salvador, estimated that 15 of the about 150 drivers at his company would strike. “The rest say we are dreamers,” he said. “They say we are crazy fighting for our rights.” The Teamsters said about 100 drivers were striking altogether.

He said strikers planned to picket at the company entrance yesterday to delay fellow drivers from entering but not actually block them. Today, strikers planned to escalate by following trucks as they left the port and to throw up picket lines when the trucks stopped—reviving the “ambulatory picketing” used by the Teamsters in their decisive 1934 general strike in Minneapolis.

Because he’s paid by the load, Linares says, Pac 9 dispatchers are indifferent when he’s stuck inside the port for five or six hours, waiting for containers to be moved from ship to truck, making no money: “I call the company and say I’m stuck, two hours passed and I haven’t been served. They tell me to stay.”

And why is service sometimes slow inside the ports? In Linares’s view, it’s because the union members there have control over their work. “They’re hourly,” he explained. “They have unions and good benefits and everything.”

Apparently “being your own boss” is not the American dream these immigrants came seeking. Strikers are just looking for a chance to join the proletariat.

For more detail on the strike and on port truckers’ conditions, read here. For more on misclassification of employees as independent contractors, where immigrants are again the victims, read here.

Related
Every Union Contract Right Now Should Be the Best Ever »
Could We See a Rail Strike? »
Undaunted by Fines, Massachusetts Teachers Defy Strike Ban »
New Leadership, New Direction in Major Midwest Teamsters Local »
Ahead of Halloween, Sysco Teamsters Give Corporate Ghouls the Heebie-Jeebies »