One-Day Strikes: A Word to the Wise 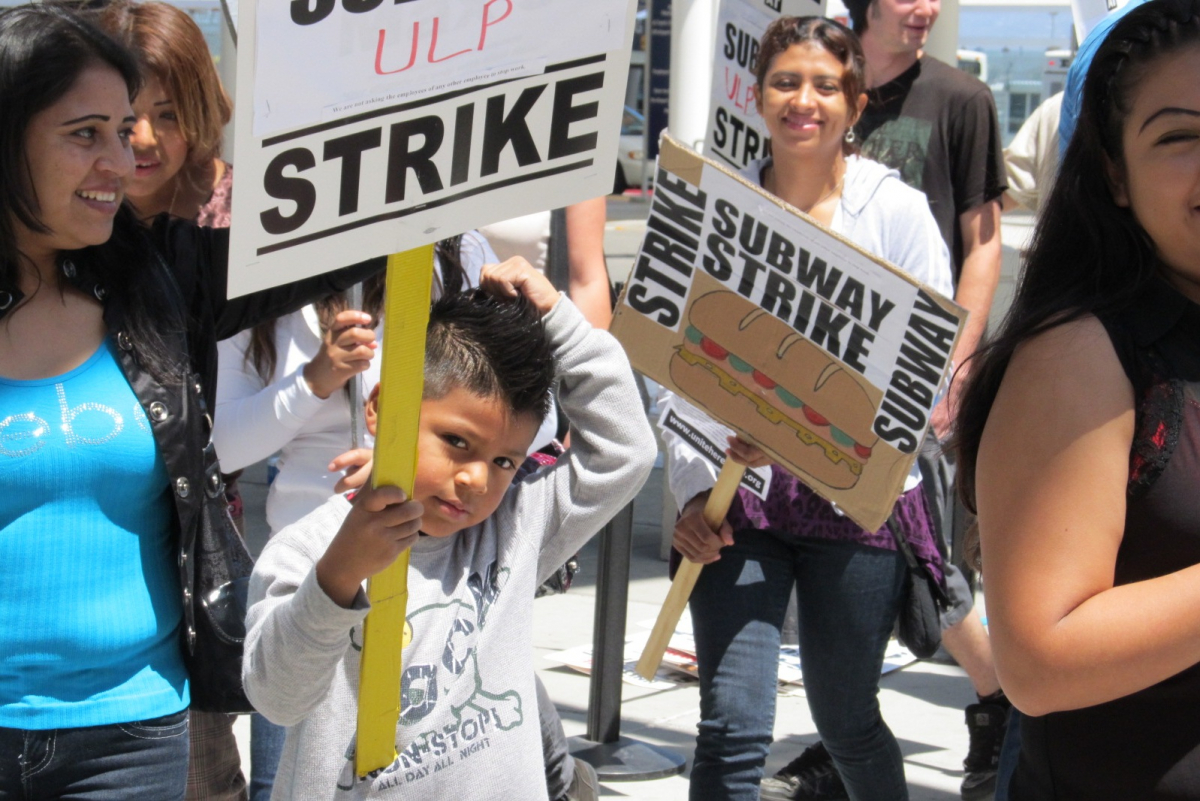 Non-union Subway restaurant workers at the Oakland airport walked out for a day in an unfair labor practice strike to protest the firing of a co-worker for organizing. Workers can’t be legally fired for a ULP strike. Photo: Marilyn Bechtel/People's World.

More and more unions are turning to one-day or other short-term strikes to add punch to contract campaigns. Walmart, fast food, and other non-union workers have also used the tactic to demand changes in wages, working conditions, and safety, and to protest discharges.

Workers, both union and non-union, who take part in a short-term strike have the same legal protections as workers who engage in open-ended strikes. They cannot legally be disciplined for failing to give advance notice or failing to call in early the day of the strike (an exception is the health care industry, where 10 days’ advance notice is required). Nor can the employer count the days as absences under an attendance-control program.

Once the strike is over, if the union or an individual offers to return “without conditions,” the employer must allow the worker to return to his or her original position.

A union or a non-union worker who is illegally discharged or refused reinstatement can file an unfair labor practice charge at the National Labor Relations Board. The NLRB can order the employer to reinstate the worker with back pay—although the legal process can be frustratingly lengthy.

One pitfall for union and nonunion workers who engage in short-term strikes is the poorly understood NLRB intermittent strike doctrine.

The doctrine prohibits union and non-union workers from taking part in a “series” or “pattern” of short-term strikes for a common goal. Workers who participate in what the Board calls “intermittent” or “hit and run” activity lose their NLRA protections and can be fired.

Although most Board decisions on this topic have required three walkouts before falling under the intermittent label, in some cases the Board has applied the label after two walkouts. Walmart will probably cite the intermittent strike doctrine to defend its recent discharges of short-term strikers.

The surest way to avoid classification as an intermittent strike is to limit the number of short-term walkouts to one (this does not forfeit the right to later call an open-ended strike). A union or organizing committee that wants to hold multiple walkouts should take the following precautions:

Another threat to short-term strikers, especially if the strike is for more than a day, is the risk of permanent replacement. A 1938 Supreme Court ruling (Mackay Radio) allows employers to hire permanent replacements for workers engaging in an “economic” strike—whether the walkout is one day or open-ended.

Unions have long sought to protect strikers against permanent replacement by amending the National Labor Relations Act. They came closest in 1992 when a union-backed anti-Mackay bill sailed through the House of Representatives—only to fall to a Senate filibuster by three votes.

The replacements may be hired before the strike or while it is in progress. A permanently replaced striker must wait for vacancies to open up. In most states, however, he or she can collect unemployment benefits.

One way to protect short-term strikers against permanent replacement is to send the employer an offer-to-return letter immediately after the strike begins. The letter should state that the worker or workers will return to work “without conditions” the following day or soon thereafter.

Local 21 hereby notifies the company that at 7:00 a.m. today, Tuesday, October 2, 2013, members of the bargaining unit represented by Local 21 commenced a 24-hour strike for a fair contract. Peaceful picketing will occur at the company’s premises.

Strike activity will cease as of 6:59 a.m. October 3, 2013, and an offer to return to work without conditions at 7:00 a.m. on October 3, 2013 is hereby made on behalf of all persons in the above-described bargaining unit and all employees who honor the union picket line.

Under NLRB rules, an employer served with an unconditional offer to return to work cannot hire permanent replacements during the remainder of the strike.

In an organized workplace, the union can submit the letter for all its members. In a non-union workplace each striker must submit an offer.

A second technique that protects strikers against permanent replacement is to position the walkout as an unfair labor practice strike. Workers who participate in a ULP strike cannot be permanently replaced.

A walkout qualifies as a ULP strike if its purpose, or one of its purposes, is to protest an employer violation of the National Labor Relations Act. Examples include surveillance of concerted activity, threats of punishment for taking part in organizing activity; or the issuance of job rules that deter or discourage workers from taking part in protests.

(Note: an employer violation of other employment laws, such as OSHA, Title VII, or the Fair Labor Standards Act, does not create a basis for a ULP strike.)

The union or the organizing committee should take the following steps to link the walkout to the ULP violation:

It is important that all strikers understand the ULP strike strategy. If a reinstatement claim goes to an NLRB hearing, the employer may subpoena rank-and-file workers in the hope of eliciting testimony that the strike was called solely to protest low wages or another non-ULP matter.

Robert M. Schwartz, a Boston-area labor lawyer, is author of several labor law handbooks including Strikes, Picketing and Inside Campaigns.

A version of this article appeared in Labor Notes #414, September 2013. Don't miss an issue, subscribe today.
Related
Viewpoint: Burgerville Workers’ Lessons for Independent Unions »
Viewpoints: How Academic Workers’ Leverage Can Grow in a Long-Haul Strike »
Every Union Contract Right Now Should Be the Best Ever »
Could We See a Rail Strike? »
Undaunted by Fines, Massachusetts Teachers Defy Strike Ban »