Bringing the Community to the Bargaining Table 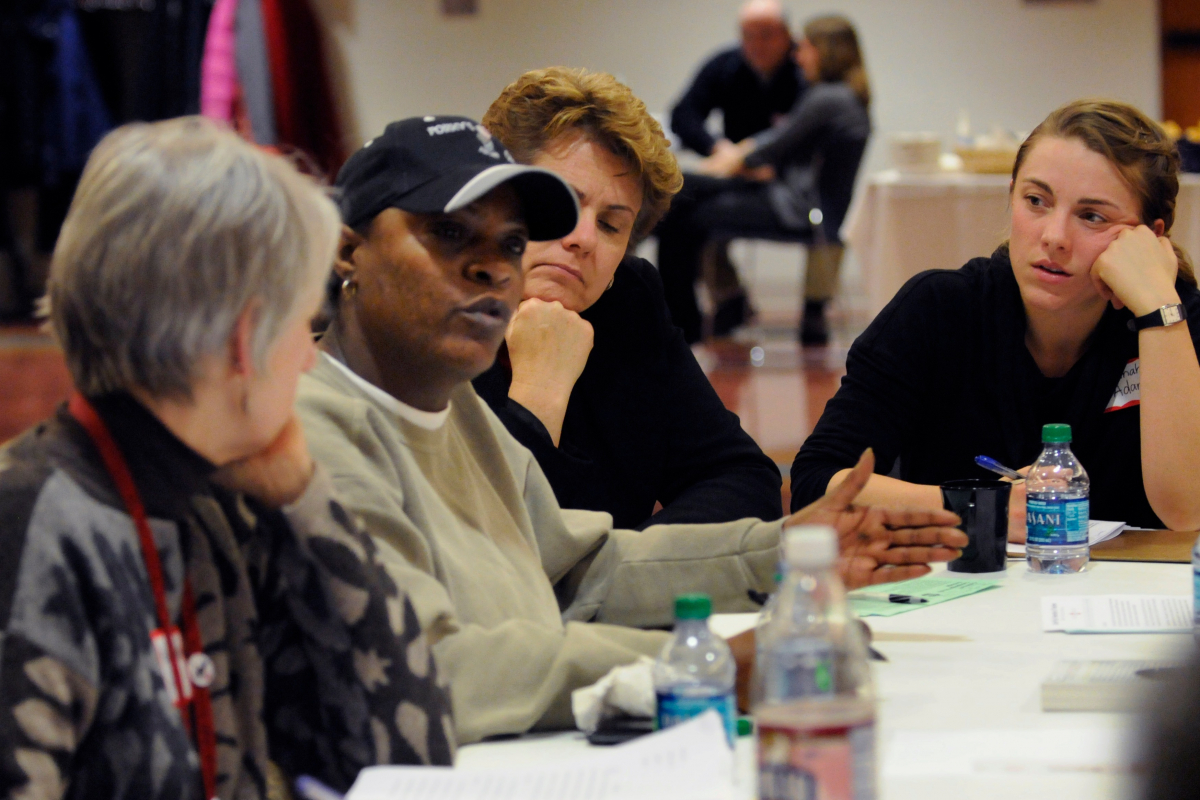 St. Paul teachers at a listening session last year heard from Dora Jones of Mentoring Young Adults. Teachers are including parents and community members in study groups and in bargaining. Community witnesses have even kept management from acting up at the table. Photo: Janet Hostetter.

In a time when parents, community, and teachers have less and less say in how their schools are run, the union contract is one place where we can authentically give parents and community members a voice.

That’s how union teachers in St. Paul feel about our contract: it’s the most important legal document—and social justice document—for ensuring a quality education for our students.

So over the past four years we have gradually moved toward public participation in our negotiations.

There was a bit of tension around open bargaining on our team at first. People weren’t sure how outsiders would act, and were afraid of saying something “wrong” in front of community members.

But after reflecting over the last 10 years’ negotiations, we realized there was nothing we said around the table that we would not want our members and the community to hear. In fact, there were many things said by management that we really did want the community to hear!

For example, when we proposed that any principal or teacher being considered for a leadership position needed to have an evaluation of their teaching on file, management said no. We wanted the public to hear that the district thought it had the right to hire people to teach teachers how to teach, or supervise them, even if they hadn’t demonstrated that they knew how to teach themselves.

Management used to assert that class size didn’t matter, and that if teachers didn’t like their conditions, they should find another job. These types of comments have stopped.

Our first step to open bargaining was with our own members.

Before, the only members in the room were usually the five or six members of the bargaining team. During 2009 negotiations, we asked about 50 teachers to show up for bargaining as we introduced language around special education. They came wearing their St. Paul Federation of Teachers T-shirts and we prepped them for their role. They introduced themselves, a few spoke, and all listened intently.

Management reps were clearly on their best behavior. They knew they couldn’t just make up stories or claim our reporting was false. The people who knew the truth were in the room.

Bargaining team members spoke with more confidence knowing they were supported by those who felt as passionate about the students and learning conditions as they did. They also felt appreciated.

Often we invited parents to speak. One parent told how she wanted to help in the classroom, but with so many students and desks she was physically unable to get to the students.

In the next round of negotiations, for the 2011-13 agreement, we took further advantage of Minnesota’s open meeting law, which says all negotiations with public employers are open to the public.

We were seeing that in other districts, right-wing bloggers and other groups were showing up at bargaining and writing with a negative slant. SPFT decided to get ahead of the curve and embrace open bargaining.

We trained a Contract Action Team that recruited members to attend negotiations and communicated reports back to the members at their sites. They reached out to visitors, made sure they signed in, and answered their questions. We also trained CAT members in dealing with media.

We partnered with Neighborhoods Organizing for Change (NOC), a grassroots group in low- and moderate-income neighborhoods, to do a community survey on education issues throughout the Twin Cities, and then issued a report on their findings. Two concerns were too-large classes and lack of communication between school and home. We incorporated these issues into our proposals for bargaining.

Our format is simple. Negotiations start at 5:00 p.m. Members and guests come at 4:30 to caucus beforehand. Norms are explained and proposals are reviewed.

The audience does not actively participate in the negotiations but is sometimes invited to speak. Parents have testified about class size and about how important Pre-K was for their children.

Occasionally, we ask for a caucus, and management leaves. We can then get input from the larger group before proceeding.

Management has now started to invite parents and community members, too. This hasn’t been successful for them, however. This September, we presented a proposal that would ensure all students had access to a librarian in their schools (St. Paul has 10 librarians for 39,000 students). When our CAT members talked to the invited parents on their way out the door, one said, “I can’t believe they are not supplying you with the tools you need to teach our children.”

Until we came across the Parent/Teacher Home Visit Project, started in Sacramento, California, 15 years ago, we had never seen an idea that was such a win for everyone—students, families, district, teachers, and union. The idea is that teachers can teach students better when we know them better and have a functional partnership with their parents.

Started by parents, teachers, and community members, the project in Sacramento (and other locations they helped to start in 16 states) saw increases in achievement and attendance and decreases in suspensions in buildings where a majority of teachers were doing home visits.

Despite the fact that this was a win for all, our district refused to consider the idea when members proposed it. Luckily, our union leadership saw the value and sponsored pilot training, and our bargaining team brought the idea—and funding for it—to the table.

Participation by teachers and families is voluntary and teachers are compensated for visits outside their workday. The visits are meant to build a relationship—no talking at the parent—and no paperwork is brought.

Today the project is fully run by the union and has grown considerably—from only six teachers doing about 15 visits three years ago, to more than 350 teachers trained today and more than 200 home visits conducted last year.

Teachers visit the homes of their students with another teacher from their building. The discussion is around hopes and dreams that both the parent and the teacher have for the child, expectations that parent and teacher have for each other, what the student does outside of school, and the parent’s own experience with school.

Sacramento’s project is becoming a national nonprofit and SPFT is a regional training site for it. This summer our union was contacted by two other districts to train their teachers in our model and we have also put on a series of other trainings for teachers on building parent/teacher partnerships. We have had major articles in both local papers, and this fall will be featured on the Education Nation segment of the “Today Show.”

Any tensions the negotiating team had about open bargaining have quickly faded. Instead of fear of those in the room, our team feels supported, energized—and successful.

And it’s hard for management to assert its “right” not to bargain on some items (such as class size and special ed caseloads), when there are community members in the room. We counter with “these are our schools, everyone in the room,” and we should be deciding these things together.

Transparency has also helped us win over our more skeptical members. One member came to watch because he felt his union wasn’t representing his interests. He was so taken by the session that he continued to come every week. In the end he confessed his original motives and said he’d learned his union was working not only in his best interests but in those of the children.

In this year’s negotiations we wanted to bring even more community input. We formed two study groups made up of parents, teachers, and community members recruited from organizations that we have relationships with.

The study groups used two books. One read The Schools Our Children Deserve, by Alfie Kohn, and the other used Teaching 2030, by Barnett Berry and the Teacher Solutions 2030 Team. The books were intentionally from different perspectives, to spark conversation.

The study groups then made recommendations about what we should advocate for in negotiations. We took those recommendations to broader groups of the community, such as NOC, and to our members in a number of listening sessions. The sessions were led by an outside facilitator so that union leaders would not influence the process.

We took the refined recommendations, plus information from our member survey, and gave the information to a researcher. He organized the material into themes and incorporated research on best practices in education.

This material was organized into a report called “The Schools St. Paul Children Deserve,” which was the basis for our key bargaining proposals: access to pre-K for all students; access to school nurses, social workers, counselors, and librarians; lowering class size further; and dropping a standardized test mandated by No Child Left Behind.

Thus far, management has refused to bargain on 18 of our 29 proposals because of “managerial rights.” But the community is in the room, and the community people think differently.

Nick Faber is an elementary science specialist and secretary of the St. Paul Federation of Teachers. “The Schools St. Paul Children Deserve” can be found at spft.org