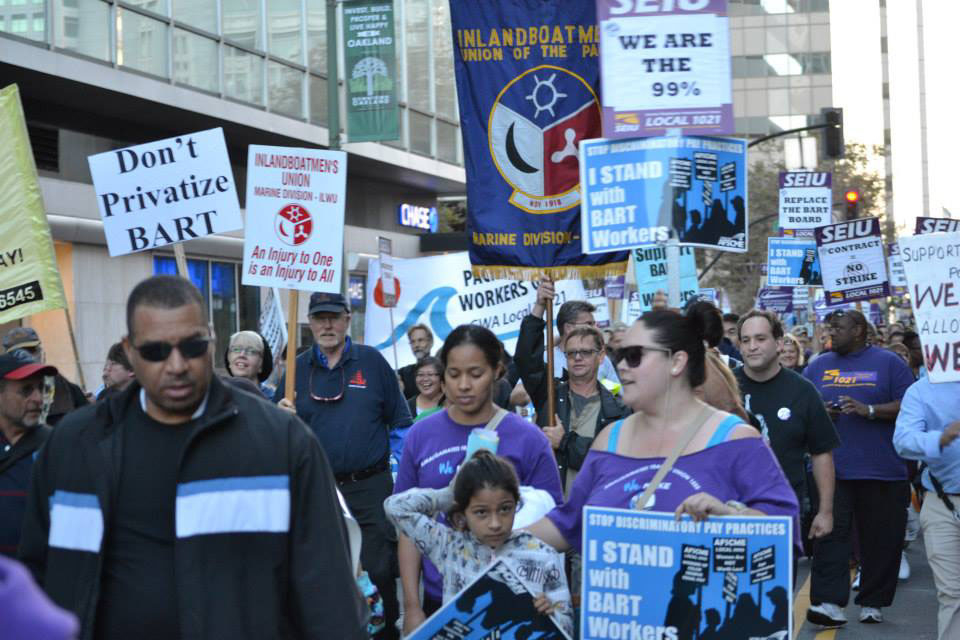 BART workers rallied at Oakland City Hall during the strike. Their settlement pushed back on management's attempt to gut work rules. Photo: SEIU 1021.

Transit workers in the Bay Area returned to work yesterday after a five-day strike shut down a train system that serves 400,000 riders daily.

The tentative agreement reached Monday evening offers raises of 3-4 percent each year to Bay Area Rapid Transit (BART) workers alongside concessions on health care costs and pensions. BART will deduct 1 percent per paycheck (not counting overtime) for pensions the first year, increasing 1 percent each year for the life of the four-year agreement.

The union fought off the big concessions on wage and benefits that BART was after, and held on to the right to have a say in work and safety rules. “Our commitment to improving the safety at BART doesn’t end with these negotiations,” said Des Patten, Professional Chapter President of Service Employees (SEIU) Local 1021.

The agreement clarifies the issue of past practices that the unions said was a sticking point in negotiations. If the two sides can’t resolve safety concerns related to changes in work rules, they can take management’s proposed changes to arbitration.

While BART management seemed eager to extract big concessions by pushing the unions into an unpopular strike, its strategy backfired over the weekend when an off-duty train struck and killed two non-union engineers, putting a national spotlight on BART union workers’ safety concerns. The ultimate settlement shows concessions on both sides, with the union retaining some safeguards on working conditions.

Despite rallies, leafleting the public, and working with religious and community groups, the two local unions never persuasively connected the contract issues of electricians, drivers, conductors, mechanics, and station agents with those of riders—allowing BART to argue that workers were holding up changes that would make things more efficient for riders.

Public sentiment overall was negative toward strikers, not only because of the inconvenience for thousands of commuters but also because the media were carrying management’s line. “It was a carefully plotted out effort,” Hanley said, “not just to reduce their wages, but to use a very public group who had the right to strike to inflame the community.

“They were successful in getting numbers of the public to attack the BART workers for things like having a pension, for owning a home,” Hanley said.

It would have taken a far more ambitious campaign, like the Chicago Teachers Union’s build-up to their 2012 strike, to shift this dynamic.

Last Friday’s strike by 2,300 workers, a majority represented by ATU Local 1555 and SEIU Local 1021, shut down the trains for the second time this year, after management made a final offer and stopped negotiations. (After a four-day strike in July, Governor Jerry Brown intervened, setting up a 60-day cooling off period.)

While management claimed to want only the freedom to implement new technological advances and cut waste from the system, the unions said the final offer was a blatant effort to provoke a strike, in order to get big changes and total control over work rules.

Leaders called it bad-faith bargaining when management moved backwards from progress already made at the table and refused to take disputed proposals to binding arbitration, as the unions were willing to do. Even local elected officials, who were often reluctant to take a side in the strike, spoke critically of BART’s efforts to blow up the deal at the last minute.

Union negotiators said they had already resolved many issues at the table, over hours and days of bargaining with state and federal mediators—including economics, often the sticking point.

“It’s not so much about money as some kind of anger in their offices about workers having any rights,” said train operator and ATU 1555 recording secretary Chris Finn.

BART set the tone for negotiations from the beginning by flying in a labor consultant from Ohio, known for strife and strikes across the country. Thomas P. Hock is paid a steep $3,400 per day for his services. He is vice president of a private bus company, Veolia, that has contracts with Bay Area cities (it handles BART’s paratransit services). In Phoenix and Tempe, Arizona, which have privatized services, bus drivers have struck Veolia.

Finn said the writing was on the wall when Hock was brought in: “What he does is cause strikes.”

Not only does Hock bring his interest in privatizing public transport to the bargaining table, but unions allege Hock’s company directly benefited from the unions’ first strike in July, as Veolia shuttle buses were contracted by BART to fill in.

Finn said the key issue of the strike was that at the last minute, management wanted the power to change work rules that are past practices for BART workers but not laid out in their contract, without bargaining.

BART framed the fight as about union resistance to new technology and modernization of how trains run, whereas members said it was about workers having a say in their work rules to ensure safety.

Management demanded the right to disregard past practices which would allow them to make sweeping changes to workers’ schedules and workload, with little notice and without negotiating.

“We are the ones that have our eyes on the situation; we understand the problems of implementing a change if they want to cut corners,” Finn said. “We understand how a change would best be applied. That’s why we would want mutual agreement,” for workers’ own safety and for passengers’.

The deaths of the maintenance workers (not part of the group striking) may have brought both sides to agreement. The accident put a spotlight on both the need for trained, experienced operators and the safety risks that come with the job, one of the issues the union raised in negotiations and to the public.

Even in the labor-friendly Bay Area, the media portrayed the workers as unreasonable and the strike as unpopular with commuters. Union leaders said in pushing for a second strike, BART management wanted to capitalize on riders’ frustration with the whole dispute, hoping the public would turn on workers.

Is Good Pay a Crime?

Management and its supporters made the common argument that public sector workers are compensated well and should not punish commuters, many of whose wages and benefits are lower.

But for unions it was an all too familiar power grab, where even the elected board of a public agency in a liberal city was taking advantage of the economic situation. And this was after BART had grown in riders and in revenue, in an area experiencing tremendous prosperity among the wealthy.

The transit unions were willing to make concessions when BART was struggling economically. In 2009, both unions agreed to cuts adding up to $100 million, on top of service cuts and fare hikes. Soon after the 2009 contract was settled, BART was running at a surplus again.

During the strike and after, politicians talked publicly of banning public sector workers from striking altogether, as in New York and Wisconsin. But, Finn said, public sector unions’ success in beating back anti-union legislation, including a ballot measure last year, Proposition 32, would make that a challenge for legislators.

“The major lesson to our own members and to people in the public is, ‘Wake up,’” Hanley said. “There was a time when people thought workers’ gains were something that they would get next time.”