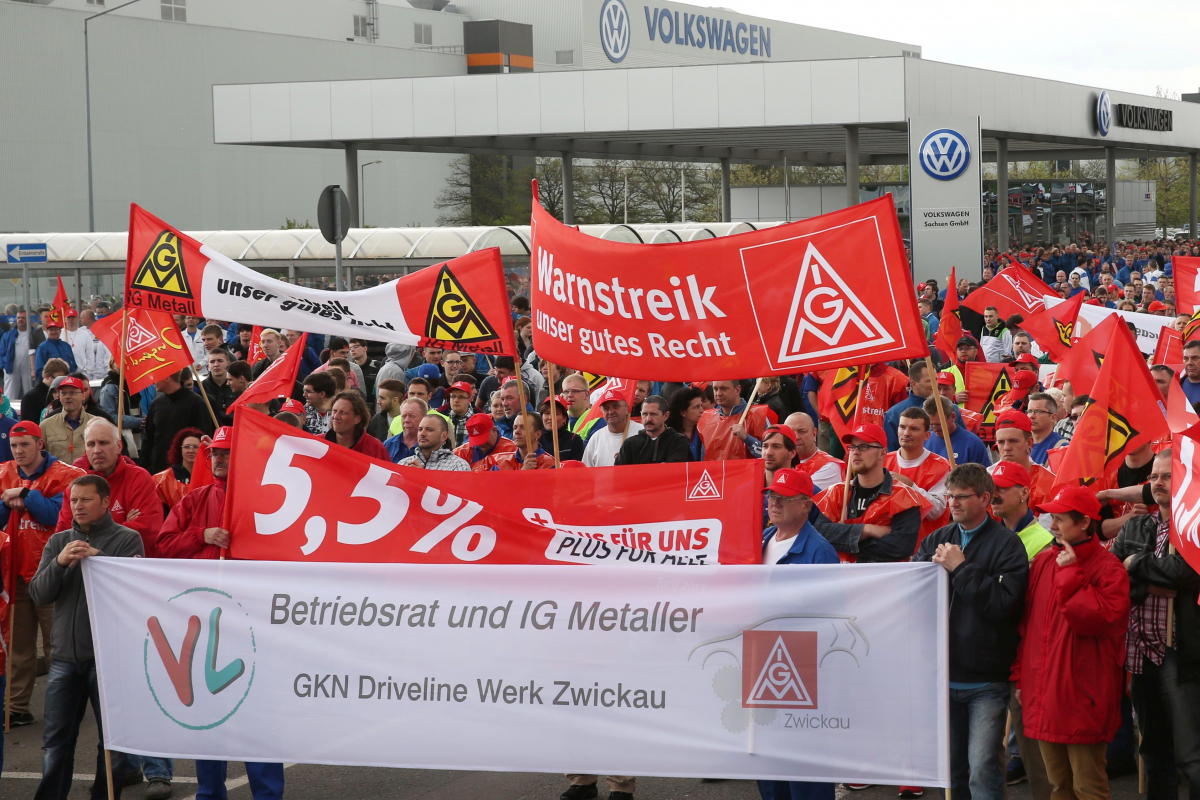 VW workers staged a several-hour “warning strike” in Zwickau, Germany, on May 13, demanding a 5.5 percent raise. German plants have a dual representation system with both a union, which can strike, and a works council, which is pledged not to. The United Auto Workers have asked VW to agree to a similar set-up in Chattanooga, Tennessee. Photo: I. Pastierovic/IG Metall.

The United Auto Workers, so long frustrated in their attempts to organize foreign-owned auto plants in the U.S., may have found a different way in.

IG Metall members on VW’s plant-level and global works councils began pressuring top management. The only big VW assembly plant without a works council was in Tennessee, they noted. VW should set one up there, too. The UAW sent local workers to a meeting of the VW Global Works Council.

But U.S. labor law—what’s left of it from the National Labor Relations Act of 1936—says management may not “dominate” a labor organization nor “contribute financial or other support to it.” Works councils operate with company money (see box at right).

Thanks to Wolfgang Schaumberg and Boy Lüthje of the Institute for Social Research in Frankfurt for help on understanding works councils.

A works council would be legal under U.S. law only if the workers involved also had their own independent representative: a union. So top VW executives, acceding to the pressure from around the world, told managers there not to stand in the way of a union.

Obviously, that gave a big boost to the UAW’s collection of union cards. In early September the union announced that a majority of the 1,500-1,600 union-eligible workers had signed.

SUCCESS IS BOUND UP

It’s worth quoting how those cards read. In addition to authorizing the UAW to represent the signer in bargaining, they say,

We, the employees of Volkswagen, are joining together to create the most success­ful Volkswagen Chattanooga facility possible. We recognize that our job security and our success as employees are bound up with the success of our company.

We commend and embrace the Volkswagen philosophy of co-determination and aim to contribute to the production of the highest quality products, safe and efficient production methods, and the overall profitability of Volkswagen.

We believe that the best way to actively participate in our company and to contrib­ute to VW’s continued success is to achieve representation as our colleagues have at the other 61 Volkswagen facilities across the globe.

We choose to be represented by the UAW because, by working together, we can make the Passat the #1 car in the United States.

A flood of anti-union ads has poured in from out of state to block the UAW, from such groups as the Right to Work Foundation. A billboard by the Competitive Enterprise Institute reads, “Auto unions ate Detroit. Next meal: Chattanooga?”

Chris Brooks, a founder of the community organization Chattanooga Organized for Action, has been active in attempts to counter this deluge, aimed at VW workers, VW management, and public opinion generally. Brooks, who now works for a teachers union, has spoken at forums and written an op ed about the financing of such groups.

He says the opposition is three-pronged: the Tea Party, the Chamber of Commerce, and the political establishment, including the governor and Senator Bob Corker.

Taxpayers made a “massive investment” to bring Volkswagen to Tennessee—half a billion dollars from the government of the right-to-work state, Brooks pointed out. If workers are involved, he hopes, there’s more chance they can convince the company to increase its investment in the plant.

“They’re nice paying jobs but there’s not any sense that you can’t just be let go,” Brooks said, citing some layoffs last summer. The crucial fact animating all the discussion, pro and con, is that VW is now deciding whether to build a new seven-passenger SUV (concept name: CrossBlue) in Tennessee or in Mexico.

Jonathan Walden, a two-year employee in the paint shop who’s part of the union drive, echoes the hope that a union and a works council will boost job security. Asked what he hopes to win with a union, he says, “If you look at the order of what’s most important, wages will be way down there. It’s not what I’m concerned with at all.”

“The absolute first is job security,” Walden said. “In the Great Recession we’ve had I was laid off four times. And I had it better than a lot of people did.

“More work for us. We want to work every day.”

Both Ford and GM have long had union plants in Tennessee. GM’s Saturn factory was, in fact, widely touted as a model of union-management cooperation and had an elaborate structure of “counterparts” (workers and managers paired up) who were supposed to co-manage every aspect of production.

But the UAW has still faced an uphill climb with a workforce unaccustomed to the union concept. Unlike the 80 percent Black Nissan plant in Mississippi, the UAW’s other big target in the South, a large majority of the Chattanooga workers are white. Typically, African-American workers have been more open to unionization.

Walden had held mostly service and retail jobs before. “This is the first time I’ve been in a place that’s in a field that’s used to unions,” he said. He asked many questions before deciding the union was the way to go.

An anti-union group submitted 563 cards opposing the UAW October 4, with workers revoking their signatures if they had signed union cards and requesting a decertification election if the union is recognized. Walden guessed that some of those signatures might be from employees not eligible for the union.

The group’s reasons for opposing a union range from “trusting” that management will continue wage parity with the Big 3 through fear of a shutdown through the UAW’s record on allowing temps and two-tier wages.

Walden said the antis fear management will close the plant or “don’t want to deal with the UAW. They don’t seem to be able to articulate it that well, but they blame the UAW for what happened to Detroit.”

One commenter on the anti site, channeling anti-union workers everywhere, wrote: “I choose, everyday, to come to work at VW Chattanooga Operations and I love my job. If this ever changes, I know that I have the right to look for another job.”

The UAW wants VW to recognize the union without an election, but Volkswagen says it’s in no hurry on either the union or the works council. Talks with the union are likely to continue into next year, a Tennessee human resources official told Reuters.

Walden, though, “can’t wait. I want to open more steps in the future and success of this plant. I want to take advantage of VW’s philosophy, and the way VW works is through codetermination.”

A version of this article appeared in Labor Notes #416, November 2013. Don't miss an issue, subscribe today.
Jane Slaughter is a former editor of Labor Notes and co-author of Secrets of a Successful Organizer.
Related
Ballots Out in UAW Presidential Run-Off »
2022 in Review: Harsh Conditions, Good Surprises »
Challengers Win Big in UAW Elections; Presidency Headed to Run-Off »
Ballots Are Out in UAW Election, with Contrasting Visions of Unionism Up for Leadership »
Auto Workers Turn a Corner for Strike Pay and Democracy »