'Uh-Oh, Instead of Defeating Us They Made Us Defiant' 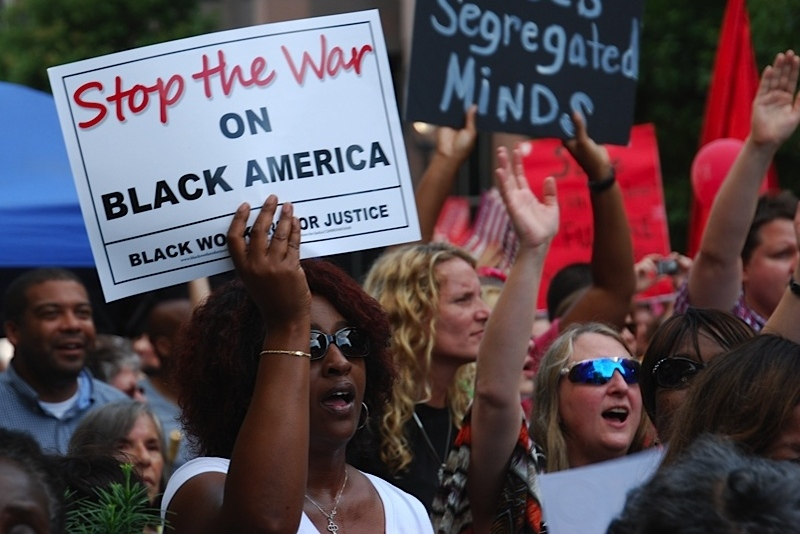 Local 1199 members came from New York to be arrested, and at least 1,000 teachers mobilized for the final Monday. Photo: Ajamu Dillahunt.

Since April North Carolina has made national and international news with a remarkable social movement that has gathered thousands to protest, with nearly 1,000 arrests for civil disobedience.

The Forward Together Movement, led by the North Carolina NAACP, showed up at the General Assembly in Raleigh for 13 consecutive Mondays while the Republican/Tea Party-controlled legislature was in session.

Although 17 clergy members made up the first wave of arrestees, the activists who formed the backbone of the actions were part of the six-year-old, NAACP-led HKonJ Coalition (Historic Thousands on Jones St.—site of the legislature), which had mobilized thousands to the Capitol every February for a 14-point progressive agenda.

It includes civil rights, labor, environmental, and other social and economic justice groups. With each Moral Monday, more groups and thousands of individuals joined the ranks.

The laws passed this session were more than familiar austerity measures. They were ideologically driven measures meant to shrink government and give free rein to the private sector. At their center was a vicious racism.

Some lowlights (there’s a lot more):

Each week displayed a different theme. After a rally, those who intended to risk arrest and their supporters entered the legislative building and stood outside the Senate chambers singing, chanting, and praying. When they refused to disperse, they were arrested.

The NAACP leads the Forward Together Movement, but has mobilized thousands of white middle-class residents in addition to its historic Black constituency. Those who filled the grounds outside the General Assembly and those who entered the building to be arrested were majority white, as is the state as a whole.

United Electrical Workers Local 150, a pre-majority union for public employees, and Black Workers for Justice, a 32-year-old organization dedicated to workplace and community organizing, put out the call for a labor delegation and theme for the third Monday.

UE, BWFJ, the Farm Labor Organizing Committee, and postal union members showed up wearing yellow wristbands. Ten were among the 47 arrested that day.

State AFL-CIO top leaders and staff attended the early mobilizations, but it was not until the eighth Monday, after the NC AFL-CIO board voted to mobilize, that member unions turned out. State Fed Secretary-Treasurer MaryBe McMillan was a speaker, along with UE 150 President Angaza Laughinghouse.

The North Carolina Association of Educators (NCAE), an NEA affiliate, was also late to the game. Political advisors had urged the union to remain cautious and quiet in dealing with legislators and the growing movement—in spite of pending cuts to teacher and teaching assistant positions, threats to tenure, the elimination of higher pay for master’s degrees, proposals for merit pay, and the introduction of school vouchers.

NCAE President Rodney Ellis was finally arrested in the twelfth wave and mobilized at least 1,000 teachers for the final action. Rank-and-file teachers and retirees report that members were ready to fight from the very beginning.

Perhaps the biggest scandal was the behavior of the State Employees Association of North Carolina, a Service Employees (SEIU) affiliate. Director Dana Cope denounced the protests. INDY Week quoted Cope, “If you want to move a progressive cause forward right now, what that takes is being at the table. Moral Mondays is just creating a spectacle.”

In one Tweet, Cope said, “we think it unwise to break the law & overburden fellow public employees. Prefer sit down/talk policy.” And in response to a conservative blogger he tweeted that he could not “control crazy people @1199 SEIU from coming in and acting against us.”

It is rumored that Cope told the predominantly Black and Latino union members of 1199 in New York City who were invited to join the protest to “keep their Yankee asses out of North Carolina.” Eleven 1199 members did become Moral Monday arrestees, however.

In any case, organizers took advantage of the large number of potential allies. OUR Walmart and the SEIU-initiated Fast Food Workers campaign were on hand to educate and recruit.

Organizers for the Southern Workers’ Assembly, which attempts to bring together union and non-union workers across the South, had a regular presence. The NCAE has even begun to relate to the Assembly.

Teacher activist Bryan Proffitt said canvassing at Moral Mondays helped recruit to a rank-and-file social justice caucus he is helping build. “There were so many school workers there, and they had pre-identified themselves as activists and potential activists,” he said.

WHO’S THE WAR ON?

Often the legislative changes were framed as an assault on all the people of North Carolina. But the July verdict in George Zimmerman’s trial for shooting Trayvon Martin seemed to boost Black participation, after local rallies protesting the verdict.

During one protest, veteran BWFJ member Rukiya Dillahunt was chided by a white participant for holding a sign saying “Stop the War on Black America.” The person felt it should say “and white Americans.”

“I put her in check,” said Dillahunt, “by laying out the high Black unemployment rates, mass incarceration, and the ‘school-to-prison pipeline’ we face.”

The next week, white protesters requested and carried several hundred of the same signs, along with Justice for Trayvon signs.

NAACP leader Rev. William Barber expressed the movement’s outcome best: “Uh-oh, instead of defeating us they made us defiant.” He said right-wing leaders had inspired unity and fire in young people.

At the thirteenth and last Moral Monday, as the legislative session ended, Barber told the crowd of thousands, “Here we are, all races, all colors, all sexualities, all communities, all incomes”—summing up the coalition that had developed on the ground.

GETTING EACH OTHER’S ISSUES

Proffitt’s take-away is that “Moral Mondays allowed everyone to walk away with a keener understanding of the ways that their lives and issues related.

“By being on the mall together, workers and women’s rights activists understood each other’s issues better. Environmentalists heard, relentlessly, about why the attacks on voting rights were so devastating.”

Now activists across the country are asking about the Moral Monday movement, hoping to duplicate its energy and politics. Georgia activists are planning their own Moral Monday campaign, and a Moral Monday protest in Chicago greeted ALEC, the incubator of right-wing legislation.

Local Moral Mondays have been held in four North Carolina cities, and another was held at the governor’s mansion September 16 against restrictions on youth voting and severe cuts to education.

Intensified voter registration drives are underway, aiming at both local and 2014 statewide elections—coupled with a call for local Peoples’ Assemblies, mobilization, and civil disobedience aimed at elected officials in their home districts.

A version of this article appeared in Labor Notes #415, October 2013. Don't miss an issue, subscribe today.
Related
Workers at Hooters-Style Restaurant Strike, Protesting Racist Sexist Manager »
Review: White Workers Who Buy into Racism Are Shooting Themselves (and Everyone Else) in the Foot »
Interview: If Only Unions Had Managed to Organize the South, Could Trump Have Been Avoided? »
Why and How SEIU Members Are Calling on Our Union to Expel Cops »
Chicago Unions Demand to Defund Police and Fund Health Care for All »