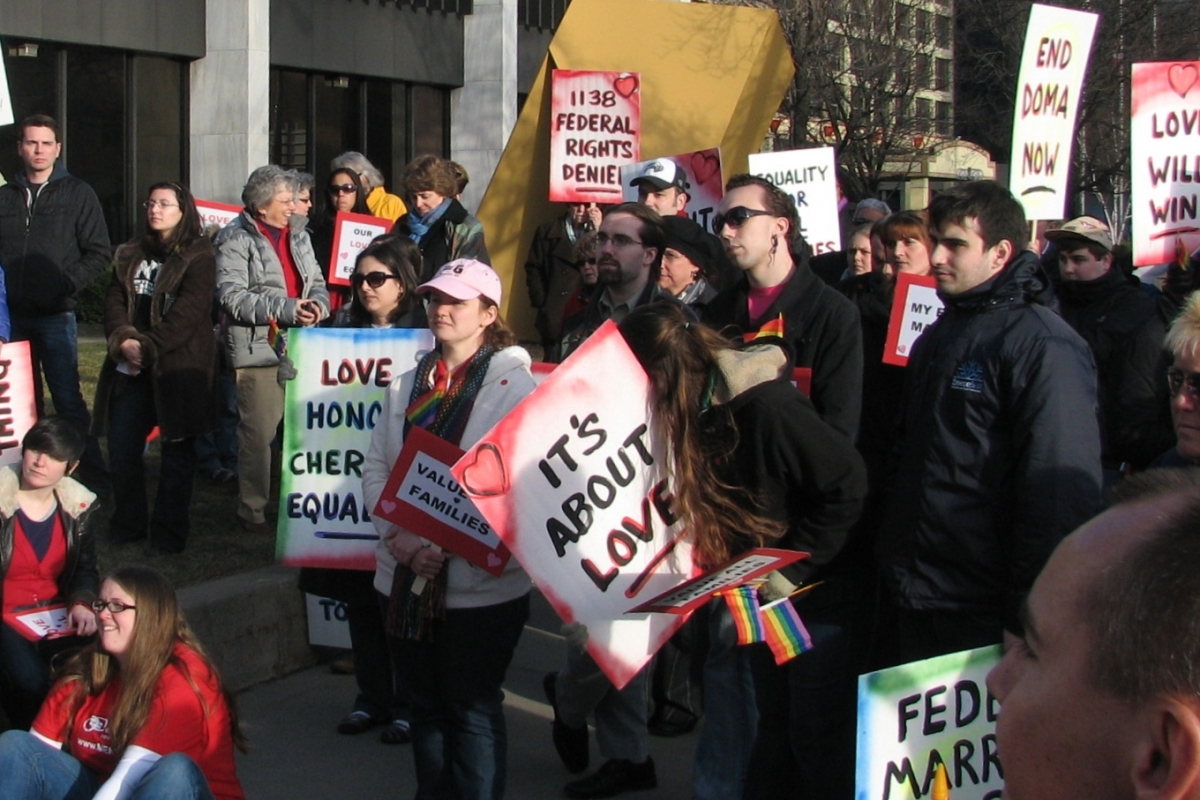 When the push came to pass marriage equality in New York state, almost every union in Rochester—including the police and firefighters—actively advocated for the legislation. Photo: Rochester-Finger Lakes Pride at Work.

Like thousands of people who followed the internet posts on June 26, I cried joyful tears as the U.S. Supreme Court issued its rulings on the unconstitutionality of the anti-gay Defense of Marriage Act (DOMA) and California’s Proposition 8.

The road to full civil rights for lesbian, gay, bisexual, and transgender (LGBT) Americans has been a long one. Validation of the right to federal civil marriage represented a huge step forward.

Plus, the rulings were personal to my wife and me and to our close friends, as well as the wider LGBT community.

A $40 civil marriage license comes with 1,138 federal rights and benefits. The DOMA court ruling suddenly made these “wedding gifts” accessible to same-sex couples.

For our married friends Sue and Judy, a binational couple, it means they will not face a looming prospect of Judy’s deportation back to England. Now they can seek a green card for the spouse of a citizen.

For David and Roger, a Vietnam veteran, it means getting military spousal benefits—including health care, which David lacks.

For Carol and Deb, who has terminal breast cancer, it brings the comfort of knowing that Carol will be eligible as a surviving spouse for Deb’s pension and Social Security.

And my wife Anne and I will now file federal taxes jointly as a married couple and pay a lesser tax burden. No longer will I owe an extra $200 monthly in federal taxes because Anne is on my health insurance policy. Before, because she was not recognized as a spouse under DOMA, Anne’s coverage was taxed as “imputed income” for me.

But my tears upon hearing the ruling were generated by something deeper than tax equity. In a nation grounded in the belief that all are created equal and deserve equal protection under the law, it was overwhelming to hear that my relationship and family were being embraced as an equal part of the American family.

My wife and I are “accidental activists.” Eleven years ago, I had to empty my vacation time bank and put my job at risk when Anne’s mother died, and later when Anne was hospitalized out of state.

My heterosexual co-workers would have gotten bereavement time and taken sick time to tend to their ill spouses, and they could have used unpaid Family Medical Leave in the health crisis. The indignity of asking for a “vacation day” to attend my mother-in-law’s funeral was a breaking point.

I approached my union president and asked to have domestic partner (DP) benefits included in the next negotiations. She was willing, but asked me to do the research to help her at the table.

In doing so, I discovered Pride at Work, the AFL-CIO constituency group, and P@W’s “Steps To Negotiating LGBT-Inclusive Contract Language.”

We distributed a binder of research information to both sides of the negotiation, as well as my testimony that the lack of domestic partner benefits made me feel “excluded and alienated” in the academic environment where I worked, where celebration of diversity was the norm.

Our negotiators were uncompromising, and success followed.

STARTING AN OUT CHAPTER

Feeling the lack of LGBT representation in the labor community, I ran for union office and founded a chapter of Pride at Work in Rochester, New York, where we live. Today I am president of Civil Service Employees Association Local 828, on the executive board of the Rochester Labor Council, and P@W’s national vice president of organizing.

Starting the P@W chapter when few LGBT workers were “out” on the job was problematic. After a failed “LGBT Worker Forum” where speakers outnumbered attendees, we saw that outreach needed to be personal and that we had to create perceived safety.

I personally approached LGBT workers from five different unions and asked if they would help form a chapter. We solicited support from the local Federation of Social Workers (IUE-CWA 81381), who printed our brochures and provided meeting space, mentoring, and advertising.

We asked progressive organizations for help in spreading the word in their newsletters and used any visibility opportunity to promote our name—parades, media, volunteering for community causes.

And we educated attendees at the Rochester Labor Council monthly meetings, using a highly effective one-page graphic report: captioned pictures that illustrated what we were doing and informed on LGBT worker issues.

We focused on creating relationships to leverage change rather than fixating on growing membership numbers.

Early on I learned that “you can’t expect people to support your cause if you don’t support theirs.” So, to build those relationships, P@W members walked picket lines, made signs, worked phonebanks, and canvassed for any union who needed help. My wife claims I drank beer with blue-collar union guys for two years before asking for their support for same-sex marriage equality.

It worked. When the push came to pass marriage equality in New York state, almost every union in Rochester—including the police and firefighters—actively advocated for the legislation.

Rochester labor was instrumental in getting the first GOP Senate vote for marriage equality—and ultimately it passed. I could not have been prouder of my union sisters and brothers.

Now P@W is an integrated part of the Rochester labor community. We pulled LGBT workplace concerns out of the closet by creating visibility and building relationships.

There is much left to do for LGBT people to gain full civil rights. Marriage rights extend to only 13 states. You can still be fired for being gay in 29 states, and for being transgender in 33 states, including New York.

But it is comforting to have labor on the side of justice for LGBT workers. Justice, after all, is what unions do best.

Bess Watts has lived with her wife Anne for 20 years. They legally married in Canada in 2006.

A version of this article appeared in Labor Notes #413, August 2013. Don't miss an issue, subscribe today.
Related
Collectively Fabulous »
'We Took Care of Each Other': A Maritime Union's Hidden History of Gay-Straight and Interracial Solidarity »
For Pride Month, Here’s Your Definitive Reading List on Queerness and Work »
Duke University Press Workers Organize with NewsGuild »
Pandemic Discrimination Against Asian Americans Has Long Roots »